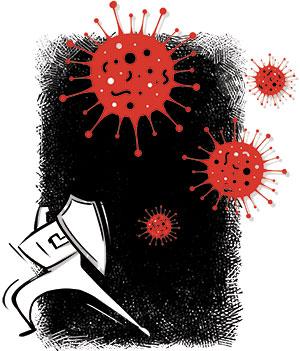 This is the story of Ken Horne, a resident of San Francisco in the United States (US). He died April 24, 1980. By the time the reason for his death due to a previously-unknown virus and the way it spreads got out of control like fire in a jungle, the phrase “unprotected sex” became a whole new reality. The Centers for Disease Control (CDC) retrospectively identified him as the first patient of the AIDS epidemic in the US. He was not the first person to have died due to the virus but his significance lies in the fact that he became the starting point from where, to paraphrase Warren Buffett, “all you need is wet snow and a very long hill”. The snowball turned into an avalanche. If author Nicholas Nassim Taleb were to define it, the event would qualify as a Black Swan. Rarity, extreme impact and retrospective (though not prospective) predictability basically summarises a Black Swan.

In its initial decades there were periods where the faulty myth became that the disease infects only gay men; and hapless young male journalists (maybe many in other professions too) dreaded a shared drop cab in the night with liberated, mid-career women who would treat them as if they didn’t exist and openly discuss their sex lives with phrases like “so what, even heterosexuals have anal sex”. In the 1980s, HIV/AIDS emerged as the biggest public health challenge in history. The virus by the end of 2016, according to the World Health Organization, had claimed the lives of around 35 million people and a double of them were infected at the same reference point.

From a fatal to a manageable disease

Nearly four decades down the line it is a now a successful public health story with the credit divided between an alliance of researchers, doctors, pharma companies, civil society and patients who participated in a number of trials while a cure was being found. “We now have about 30 medicines,” says Loon Gangte, regional coordinator for South Asia at the International Treatment Preparedness Coalition, an international agency that works for HIV/AIDS patients.

AIDS became the focal point and diseases like tuberculosis for instance, which kills more people than AIDS, failed to get adequate attention. When it came to AIDS it turned into a manageable disease from a fatal one much faster than treatments moved in increasing the options for a tuberculosis patient. In November 2017, the US’ Food and Drug Administration (FDA) approved British company ViiV Healthcare’s medicine Juluca. The medicine is the first HIV treatment that reduces antiretroviral therapy (ART) to just two drugs instead of three or four, a normal in ART. Though the price is yet to be announced, it is believed that this treatment regime will be helpful to patients in terms of lessening the side-effects on their health and their household economy. Similarly, another global pharma company Gilead is in the process of developing its own treatment with a drug having three active inhibitors. Its third phase trial has been completed and it is also looking for approval from the FDA.

The battle to achieve a complete cure began somewhere around 2007 when Timothy Ray Brown, popularly known as Berlin Patient, was fully cured with the help of a bone marrow transplant. In this case the donor was naturally resistant to HIV. Around one per cent of the global population is naturally resistant. The hope generated by the cure of Berlin Patient did not last as the treatment carried the risky potential of weakening the already weak immune system.

Research and trials are continuing in varied directions as we speak and the cures are being searched in gene therapy, restricting replication of HIV virus, shock and immunotherapy. The idea for gene therapy comes from the fact that HIV has certain inherent limitations and can’t easily replicate. For this, it enters in the cells and uses their machinery to copy and spread in the body. Another aspect is that HIV needs special proteins called receptors at the outer layer of certain cells and therefore cannot enter any random cell. The virus needs two receptors including CD4 and CCR5 which facilitate its entry into the cell. People who are resistant to the virus have a mutation in the CCR5 gene, which is called CCR5-delta32. In theory, it is possible to edit DNA and introduce this mutation. Sangamo Therapeutics, a US-based company is carrying out this particular research. In 2016, the company claimed that out of nine patients treated with gene therapy, four were cured. It was their second phase trial.

Researchers are also working on whether they can stimulate a sleeping virus and kill it. A Viral Eradication of HIV Reservoirs (RIVER) study, a combined effort of many universities and institutes is trying to find a cure along these lines. It is expected that sometime this year researchers would be able to identify if this line of treatment is a game changer.

The approach here is that in addition to standard ART, the treatment involves using drugs to check the possibility of waking up or activating the HIV-infected reservoir cells. The additional medication that wakes up the virus from the reservoir cells is called vorinostat— the “kick”. Once activated, the diseased cells are expected to be removed by cells of the immune system. RIVER is using two vaccines that will enable the cells of the immune system to recognise these newly activated reservoir cells and kill them. Around 50 patients are parti-cipating in the study.

Scientists are also moving towards developing a vaccine. A paper published in the Journal of Virology in September 2017, talks about an experiment where researchers from the German Primate Centre have demonstrated that a booster vaccine can reduce infection by up to 70 per cent. The research was done on 12 monkeys.

Blessina Kumar, CEO of the Global Coalition of TB Activists, who has also worked with HIV patients, says that the campaign against HIV was led by the affected communities and people. The advocacy around the disease was very strong. She attributes this to two factors: the HIV-affected people were not neces-sarily from marginalised communities; the most-likely case in TB. And when the HIV epidemic came there was no ART and so there was greater focus on prevention. “I think empowerment of people played a big role. When you are empowered, you are able to demand. And when you demand, you get,” she says.

(This article was first published in the 1-15th June issue of Down To Earth under the headline 'Surviving AIDS').