COVID-19: Child immunisation pushed back by years in India during 2020

As many as 23 million children across the world did not get routine vaccines, according to WHO-Unicef analysis

Several years of progress made in routine immunisation in India has been undone due to the novel coronavirus disease (COVID-19). According to an estimate released by the World Health Organization (WHO) and Unicef July 15, 2021, as many as 3,038,000 children in India did not receive the first dose of Diptheria-Tetanus-Pertusis (DPT-1) vaccine dose in 2020, that saw the emergence of COVID-19. This is the sharpest downfall any country has registered across the globe for this vaccine.

Consider this: In 2020, 87 per cent of the targeted children in India got the DPT-1 vaccine according to the WHO analysis. This coverage level was last seen in 2010. In 2019, just a year before the pandemic, the coverage had been 94 per cent.

The anti-measles vaccine coverage has come down to 89 per cent for the first dose. It was 93 per cent in 2018. For the second dose, it has come down to 84 per cent.  This rate is well below the 95 per cent recommended by WHO to protect against measles – often the first disease to resurge when children are not inoculated with vaccines and insufficient to stop other vaccine-preventable diseases. 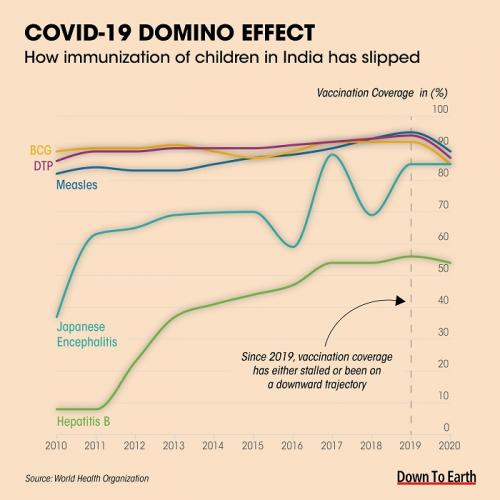 The polio vaccination drive too took a hit, with coverage dropping by 1-5 per cent points (depending upon the dose), as compared to 2019.

There have been many anecdotal reports before the WHO analysis about this trend in India. There was a broad understanding that since a lot of health machinery, down to the level of blocks and villages, was deployed in COVID-19 management, routine immunisation would consequently be hit.

However, the Indian government had constantly denied this. There has been no response from officials after the publication of this latest report by WHO.

Last year, while answering a Down To Earth query on this, a  joint secretary in the Union Ministry of Health and Family Welfare, Lav Agarwal, had said the Centre would take all possible steps to see to it that routine immunisation did not get affected. After that, there has been no update from the ministry as to how routine immunisation progressed in the pandemic year.

India started giving booster doses of DTP in 2018. The booster dose covered 88 per cent targeted children in 2018 while in 2020 it went down to 80 per cent. The coverage of the second booster has dropped by three per cent points.

The outlier to this declining trend is the vaccine against rotavirus causing diarrhoea outbreaks. Its coverage has gone up by two per cent points, as compared to 2019.

This WHO report takes into account only last year’s progress. That is when COVID-19 vaccination had not started, like in 2021 due to which, a lot of healthcare personnel involved in routine immunisation has been diverted to the former.

The drop in childhood vaccination is a global trend. As many as 23 million children were bereft of immunisation services in 2020, which was 3.7 million more as compared to 2019. This is the first set of data to document this trend.

A total of 17 million children, in all likelihood, did not receive a single vaccine during 2020. Most of these children live in communities affected by conflict, in under-served remote places, or in informal or slum settings where they face multiple deprivations including limited access to basic health and key social services, the WHO-Unicef assessment says.

The WHO’s South East Asia and Mediterranean regions are affected the most.  India is followed by Pakistan, Indonesia, the Philippines, Mexico, Mozambique and Angola. These are the countries that show the greatest increase in children not receiving a first dose of the diphtheria-tetanus-pertussis combined vaccine.

“Multiple disease outbreaks would be catastrophic for communities and health systems already battling COVID-19, making it more urgent than ever to invest in childhood vaccination and ensure every child is reached,” Tedros Adhanom Ghebreyesus, WHO director-general, has been quoted as saying in the WHO report.