There may be up to 500 people in India infected with the novel coronavirus (SARS-COV-2) by March 22, 2020, according to a new projection. At the least, there will be more than 200 cases, indicated a mathematical modeling by Chennai-based Institute of Mathematical Sciences.

The confirmed number of cases will depend a lot on the criteria used to find out patients, Sitabhra Sinha, a professor at the institute told Down To Earth.

“For instances, the cases in China spiked by several thousand on just one day, that is, February 12. This does not mean that so many cases were confirmed on one given day but the criteria to identify people was changed. Hence, if such a change happens in India, one may witness a sharp spike,” Sinha said.

Testing criteria in India is currently limited to those who have an international history or are contacts of confirmed cases. This is because the government has ruled out possibilities of community transmission.

Will the new containment measures that several state governments have introduced from shutting down educational to recreational institutes have an impact?

“It may still take a week for that to be reflected. What one would see immediately is actually the cases going up because those people who have already been infected by today will show up symptoms in five days or more,” Sinha said.

The professor also said that his calculations suggest that the reproductive number or R0 (R-naught) number, that is the number of people an infected person may, in turn, infect for India is 1.7, with a margin of 0.07.

This number is relatively less than many of European countries which are bearing the brunt of COVID-19 at the moment, and also China. A summary these numbers is given below:

Will the reproductive number of India go up or down? A lot will depend on containment measures and how people respond to them, Sinha said, as the coming days would prove to very crucial for India’s trajectory of the virus.

Sinha also said that it would be difficult for him as a modeller to predict what the actual numbers could be in the weeks to come.

“Even if you presume for the sake of calculation that the R0 number would remain the same, it is difficult to project actual numbers for a simple reason. If the testing criteria would expand and more suspected cases are in the net, then the number of people being in the surveillance net would go up,” he said.

“Thus, the base number with which you would multiply the R0 would be much different from what it is today. Therefore, the infected number of people would automatically be much more than what it is now. All depends on the criteria,” he added.

However, he did not think any substantial number of cases were being missed currently though a little bit of underreporting might be happening.

Sinha and his colleagues also plotted the worse-affected countries. They found the higher the latitudinal location for a country, the more the number of cases. 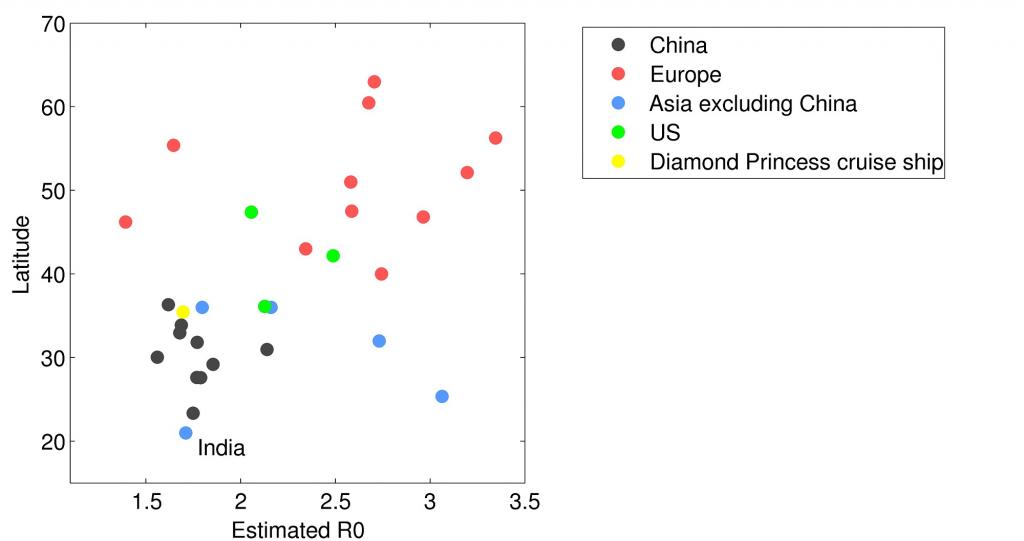 Usually, the countries at higher latitudes have lower temperature. “But surprisingly, we found that when we explicitly plotted R0 against temperature, there was no correlation whatsoever. So now we are looking at different factors like the daylight factor,” Sinha said.

Incidentally, at zero degree latitude (the equator), the day-length is 12 hours. As we move farther from equator, day length increases. Sinha said the research on the factor of daylight is still going on.