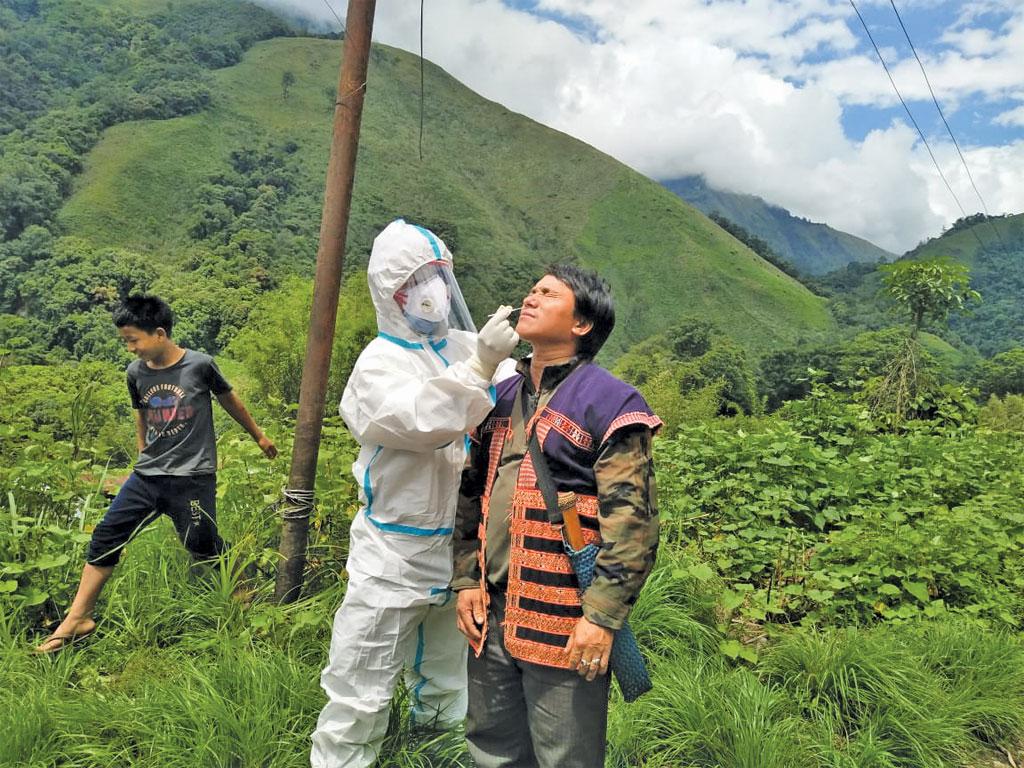 Arunachal Pradesh is home to at least 26 tribes, each with its own lifestyle and topographical spread, with many believing COVID-19 to be just another flu and so hesitating to get tested (Photograph: Minga Sherpa)

For a state that had not reported a single instance of death due to the novel coronavirus disease (COVID-19) complications for five straight months since early December 2020, except for a handful of cases during the period, a sudden surge in the numbers could be baffling. That’s what happened when Changlang district recorded India’s highest positivity rate of 91.5 per cent in the first week of May.

The officials quickly dismissed the report. Speaking to Down To Earth, state health secretary P Parthiban says the figure was wrong and a letter had been sent to the Centre to rectify the information. On May 21, Changlang again topped the list of districts with high positivity rate.

The district’s deputy commissioner Devansh Yadav cited a number of reasons for the high caseload in the district that shares an international border with Myanmar:

It is the second-most populous district after the capital region, which could be the reason for such a high caseload. Besides, we have a long porous border with Assam, which already has a high number of active COVID cases.

Curbing the spread of the infection is a major challenge for his administration as, Yadav said, many people still think COVID-19 is a viral fever and are not willing to get themselves tested. Many also do not want to adhere to the protocols of wearing a mask and maintaining social distancing despite awareness campaigns at villages.

Between April 2020 and May 2021, as many as 7,667 people across the state have been penalised for violating COVID-appropriate behaviour.

However, in a state that is home to at least 26 diverse tribes, each with its own specific prescribed lifestyle and spread across a topography that ranges from humid plains to alpine mountains, the reasons for the spread of the virus are equally varied.

Upper Siang district, which is overlooked by the Himalayas and where the Tsangpo river enters India from Tibet (and is called the Siang) before eventually becoming the Brahmaputra, also recorded a high positivity rate of 61.4 per cent in the week preceding May 21.

District medical officer Dubom Bagra said the most-affected villages are those of the Adi tribe. The communities recently celebrated Etor, an annual festival that marks fencing of farmland to protect crops from being raided by wild animals. As is customary, community gatherings and feasts were held and may have contributed to the spread of the virus.

In Dibang Valley, which reported a positivity rate of 38.1 per cent on May 21, district deputy commissioner Minga Sherpa attributes the increase in cases to the neighbouring district of Lower Dibang Valley that shares a boundary with Assam.

Conducting testing and vaccination is a challenge because Dibang Valley has a population density of one person per sq km. Reaching out to a large number of dispersed settlements is “human resource intensive”.

“It’s easier to vaccinate a village of 100 than 10 villages with a population of 10,” Sherpa said.

The challenges do not end there for the rural districts of Arunachal Pradesh. Though the government had begun the third phase of vaccine rollout on May 17, after a delay of two weeks, many complained that they were unable to register on the Cowin portal due to poor telecom networks.

More than COVID-19 or vaccines, people in the rural districts of Arunachal Pradesh are concerned about their livelihoods, which has been affected because of the lockdown and other COVID-related restrictions imposed by the state government.

Kamin Pertin owns a small general store in semi-urban Mariyang in Upper Siang. The town is 350 kilometres from state capital Itanagar and 80 km from Pasighat, the oldest town in the state.

On the phone from Mariyang over a crackly network, Pertin told DTE that businesses in the town have been allowed to operate only for one hour between 9 and 10 am. “Opening the shop, arranging the goods in the store, and eventually closing shaves off around 10 minutes. We are finally left with only around 40-50 minutes when we can actually sell anything,” he says. 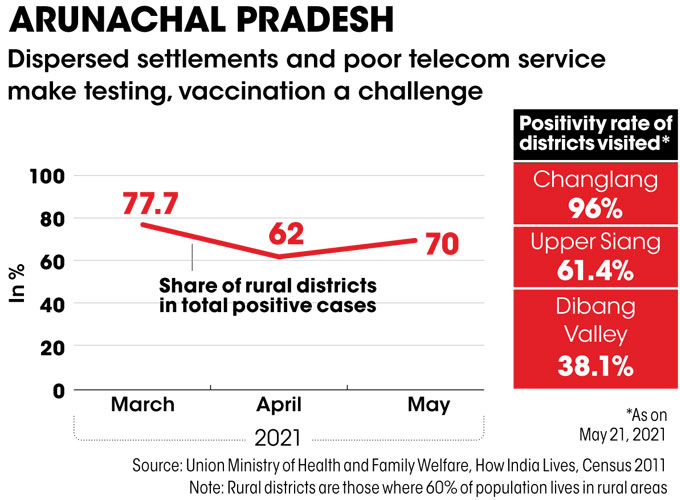 Stocking supplies for his store has also been made difficult. With the government limiting the number of people who can travel together in one vehicle, public transportation fares have increased. Pre-COVID, a trip to Pasighat to restock his supplies in a Tata Sumo taxi used to cost him Rs 300. Now, he has to shell out Rs 600 for a one-way trip. All these have slashed his earnings.

Like most people in the district, Pertin also grows rice as a subsistence farmer. But now that most of his family members have returned home because of the lockdown, the stored grain will not last them for long. Meat, an essential commodity for the indigenous people, is also in short supply.

The village of Namphai Singpho in Changlang has the Lagao Tea Estate. Spread over 4 ha, it can be called a small tea garden when compared with the larger ones in the neighbouring Assam. Amitabh Guha who operates the garden on lease, supplies tea leaves to local buyers and even to a few from Assam.

Like other tea growers, Guha depends on the skilled workforce brought from Assam, often referred to as “tea-tribes”. Since the COVID-19 outbreak, travel rest-rictions have greatly affected movement between states. The Arunachal Pradesh government’s decision to suspend the issuing of inner line permits, required by non-native people to enter the state, has added to the problem.

Occasionally, restrictions are also placed on the movement of non-essential goods, said  Guha, for which he is not able to buy weedicides and fungicides. The nearest place where the inputs are available is a commercial hub in Assam’s Tinsukia, which is 120 km away, he added.

“There seems to be an increased demand for tea during COVID-19. But I am not sure if I can benefit from it as long as the restrictions are in place, either in Arunachal Pradesh or in Assam.”