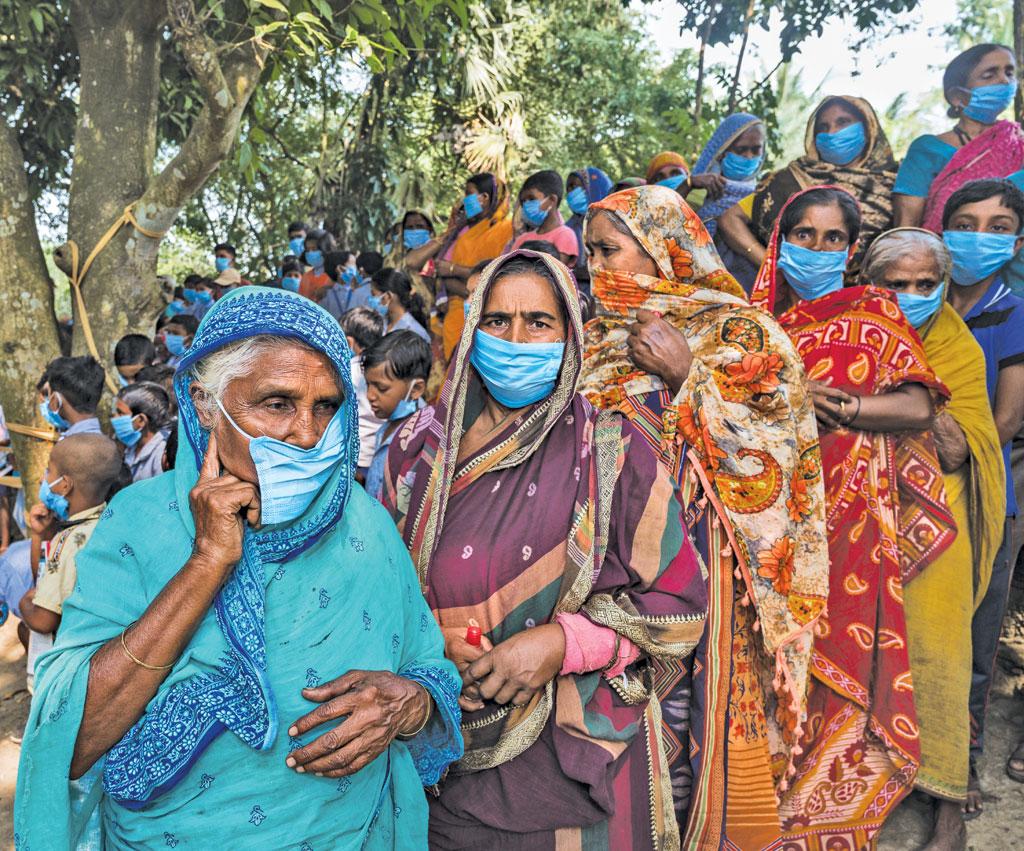 On May 4, the Odisha government was thrown into a tizzy after three people of the Bonda tribe tested positive for COVID-19. That the novel coronavirus would infect this tribal community, living in scattered hamlets in inaccessible forests, was beyond anybody’s speculation.

Identified by Census 2011 as one of India’s 75 Particularly Vulnerable Tribal Groups, the Bondas are estimated to have arrived in the region some 60,000 years ago during the early human migration from Africa and have traditionally led a secluded lifestyle, residing atop forested hills in Malkangiri, the southernmost district of the state.

Other than the occasional visit to local haats (weekly rural markets) to sell their produce or barter it for minimal household essentials, their interaction with the outside world is extremely restricted. Officials suspect that the Bondas at Mudulipada village in the district contracted the disease at a nearby market in neighbouring Andhra Pradesh, which they visited since all rural markets in their own region had been shut as part of lockdown measures.

The Odisha government has since sealed Malkangiri’s borders with Andhra Pradesh and the local administration has restricted access to Bonda hamlets. Though the infected persons have been admitted to specialised hospitals in the district, the number of infected Bondas increased to 12 over the next week.

Last year, as the news of indigenous communities getting affected by COVID-19 trickled in, the National Commission for Scheduled Tribes had asked the Odisha government to adopt special strategy for the Bonda tribe, saying that COVID-19 would be a threat to their “existence”. The population of the tribe is either stagnant or, some say, on the decline. COVID-19 breaching the hills of the Bondas marks the most worrying phase of the second wave, which has already made India the pandemic’s global hotspot.

In this phase, the virus is pervading the country much beyond urban agglomerations, sweeping across areas that are home to arguably the world’s largest rural population of over half-a-billion.

May 2021 has been the most tragic month for the country in recent memory. Between May 1 and 26, India recorded 8.2 million new COVID-19 cases — the highest in a month since the first case was reported from Kerala in January 2020. In those 26 days, 103,382 people succumbed to the illness — this is more than double the lives the country lost in April and over a third of the country’s total death count of 315,235 recorded since the outbreak of the pandemic.

A Down To Earth (DTE) analysis shows that in those 26 days, India accounted for every other new COVID-19 case and every third death due to the infection recorded globally. What escaped everyone’s notice is that every second new case and death reported from India in May was from the rural districts. This means every fourth case reported in the world that month was from rural India. 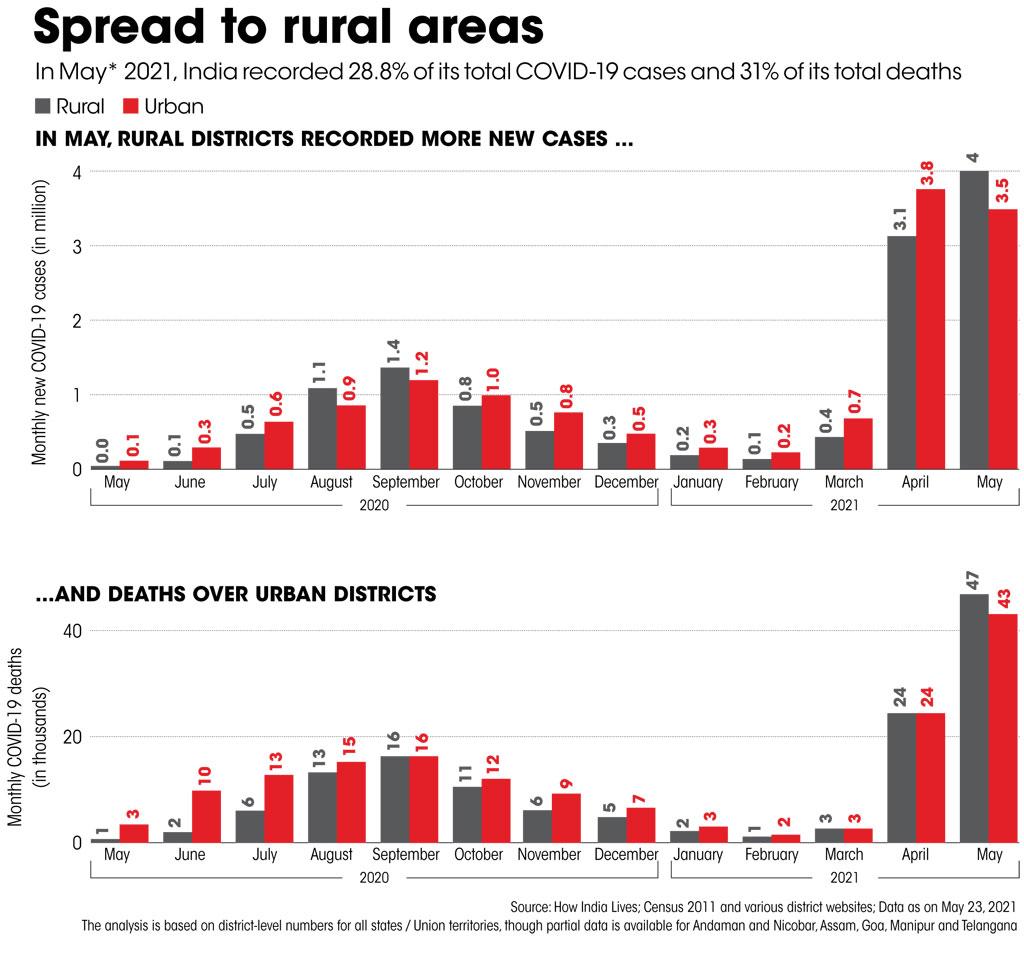 The pandemic’s shift from urban to rural areas had, in fact, begun in April. That was the month when rural districts (where at least 60 per cent of the population live in rural areas) for the first time reported 3.1 million new cases, up from 0.4 million cases the month before. This was a little lower (by 0.6 million) than the number of cases that overwhelmed health systems and the sentiments of most people in urban districts.

The number of deaths due to COVID-19, which stood at 5,600 in March, saw a significant increase to match the urban death toll of 24,000 in April. The numbers kept growing, and in May, outpaced those in urban districts. Rural districts accounted for 53 per cent of new cases and recorded 52 per cent of COVID-19 deaths.

This is a deviation from the overall trend from March 2020 to April 2021, when urban districts accounted for 52 per cent of new cases and 54 per cent of deaths. 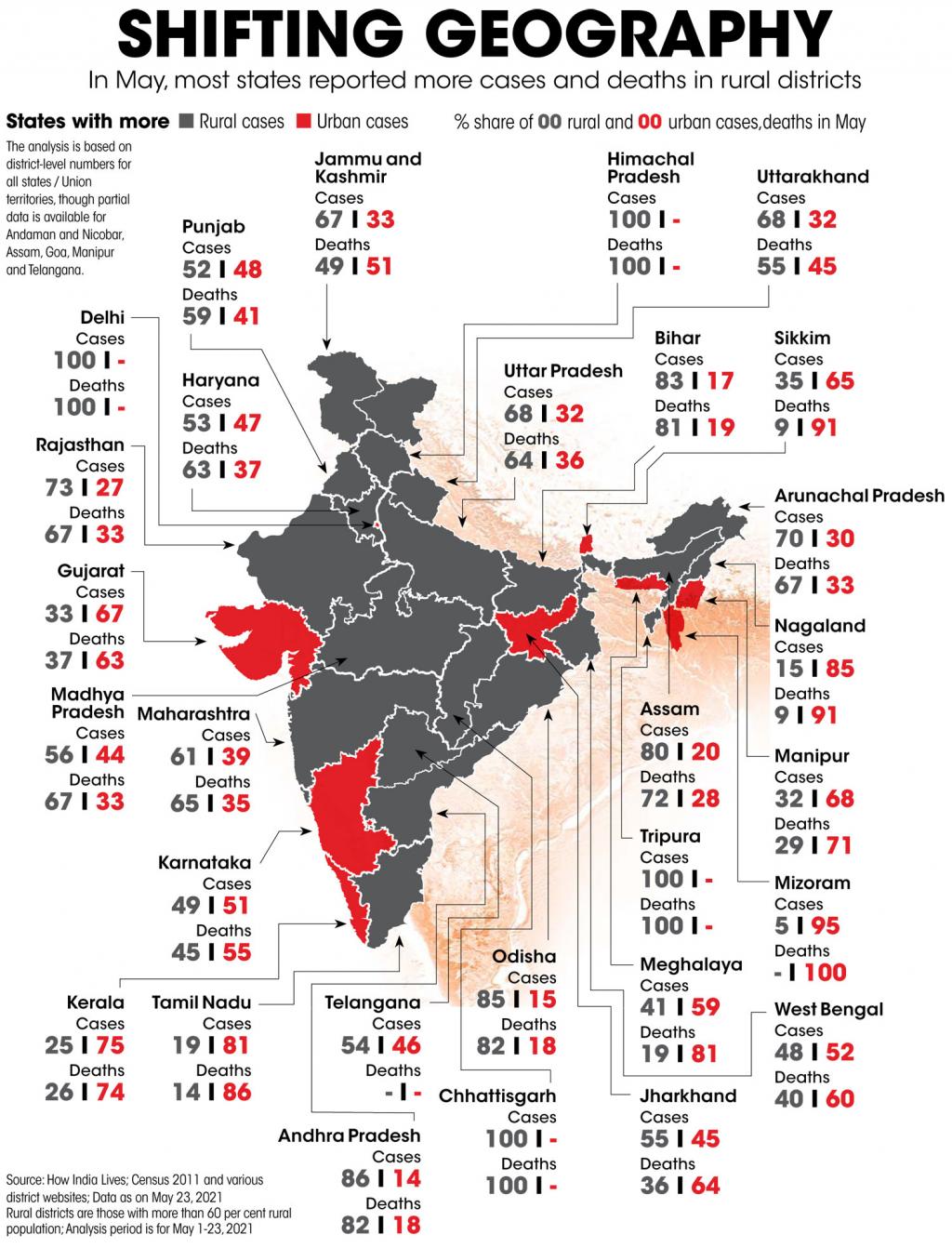 The pandemic’s shift from urban to rural areas is particularly evident in states worst-hit during the second wave. Rural districts in Maharashtra, for the first time in May, recorded more cases (61 per cent of the total new cases) than their urban counterparts; the state’s rural share in April was 42 per cent.

The daily case count on the government dash board has, however, been on a downward trend since May 8—the last date when the country recorded more than 400,000 cases in a day. Does this mean the worst is over? No one is sure.

The weekly district-wise positivity rate report, till May 21, released by the Union Ministry of Health and Family Welfare indicates that more than half of India is still not testing enough and may miss new chains of transmission in the community.

For the uninitiated, positivity rate is the percentage of people who test positive of all the tests done. A high positivity rate indicates that either the number of infected people in a community (positive tests) is too high or the number of total tests is too low. In either case, it suggests higher transmission and that there are likely more people with COVID-19 in the community who have not been tested yet. The World Health Organization recommends that the daily positivity rate be below 5 per cent for at least two weeks before the health measures are relaxed.

These are the areas now bracing for an explosion of cases. DTE reporters travelled to 16 districts with high COVID-19 positivity rate to understand how the pandemic is affecting rural India and how prepared the rural health infrastructure is to tackle the virus.