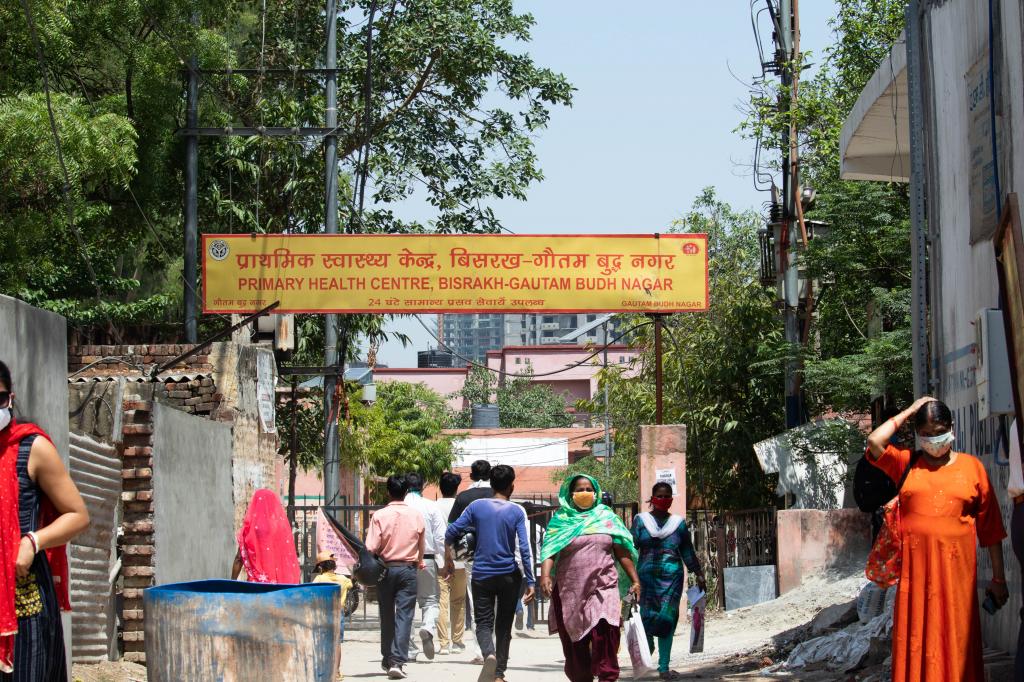 The third wave of the COVID-19 pandemic in India sparked by the new variant of concern omicron has stoked fears about an unprecedented rise in cases, followed by a rise in hospitalisations and an overburdened healthcare system — as was seen in the ghastly second wave of April 2021.

India’s metropolitan cities are the epicentre of the third wave of COVID-19 cases. With 2,135 infections of the new variant across the country as of January 5, 2022 — 653 in Maharashtra and 464 in Delhi alone — omicron is fast establishing its dominance.

With 11,665 new cases in the last 24 hours, dedicated COVID-19 hospitals in the national capital are preparing for an unprecedented rise in cases, even though evidence, for now, suggests that omicron infections remain mostly mild.

Down to Earth visited a few hospitals in the national capital to take a pulse of the situation.

Scenes from the COVID-19 ward of Lok Nayak Hospital paint a calm picture as of now. While cases and admissions have been on a rise in the past week, most remain mildly symptomatic.

“We are seeing roughly 200 patients daily for the past four-five days, but most of them have just one symptom of COVID-19 and are therefore referred to home quarantine because their level of infection doesn’t require hospitalisation,” Anmol Giri, a resident doctor on duty in Lok Nayak’s COVID ward told DTE.

“Only those with an international travel history are being admitted, despite mild symptoms, because we suspect it to be omicron. Their samples are being sequenced. We have very few severe cases, the majority of whom have either not been vaccinated or have comorbidities,” he added.

There are currently 750 beds dedicated to COVID-19 patients, which can be increased to a maximum of 2,000, according to Suresh Kumar, medical director, Lok Nayak Hospital.

There are currently 45 COVID-19 patients at Lok Nayak Hospital of which two are on ventilator and 10 on oxygen support. Of these 12, eight were not fully vaccinated. The hospital has till now treated 150 omicron cases, of which 124 have been discharged.

“Hospitalisation is bound to increase given the rate at which cases are spiking. During the second wave, nearly every patient required oxygen support. We are not seeing that this time,” Kumar said.

He added there has been an increase in hospitalisation of children. There are currently seven children admitted to Lok Nayak Hospital’s COVID-19 ward, all of whom are suffering from mild to moderate disease. OPD services continue as usual for now, but this may change if daily cases cross 25,000 in Delhi.

Omicron’s high transmissibility has begun impacting healthcare workers as well. At least four doctors and three nurses have tested positive in Lok Nayak; 20 in Hindu Rao Hospital and 50 each in Safdarjung Hospital and All India Institute of Medical Sciences (AIIMS).

At least 33 healthcare workers have tested positive in Ram Manohar Lohia Hospital (RML), according to Nandini Duggal, medical superintendent of the hospital. However, sources in the resident doctor’s association at RML said the figure was closer to 65.

“Healthcare workers testing positive for COVID-19 was preceded by a doctor’s strike over the NEET-PG counselling. This severely impacted the strength of staff working in COVID wards. It’s manageable for now but the situation may change if cases continue to rise at the current rate,” Sarvesh Pandey, senior resident, RML, said.

The clinical severity of cases here is similar to that of Lok Nayak. Pandey added that there has not been any case of high-grade fever so far. Most complain of runny nose, dry throat and body ache.

“Delhi reported more than 5,000 cases on January 5, 2022. But hospitalisations were not that high. There is no shortage of any service — beds, oxygen or ventilators. This same figure during the second wave crippled us completely,” Ishdutt Pandey, another resident doctor at RML, said.

There are 323 beds for confirmed and suspected COVID-19 cases at RML, of which 28 are ICU beds with ventilators and the rest are oxygenated beds. As of 6 pm on January 5, there were four confirmed patients and three suspected patients at RML.

Of the four confirmed patients, three have mild disease and one has moderate. The maximum capacity at RML is 405 beds — 370 oxygenated beds and 35 ICU beds.

Experts believe that the bellwether of how the situation is changing comes from India’s cities.

“We’re in the very early stages of what will be a huge surge in cases. It may reach some parts of the country quicker than others, but will eventually arrive everywhere. The surge is already very clear in urban areas where surveillance is better,” Murad Banaji, a mathematician with an interest in disease modelling, said.

He added that we have to closely watch those parts of the country already being hit badly to get a sense of how this wave will compare to the last one. Mumbai, for instance, is ahead of the curve, where cases are doubling in 2-2.5 days. During the last wave in 2021, at its peak, cases doubled in five days.

“Even in some more rural districts, despite poor surveillance, cases have begun shooting up. The absolute numbers may be low, but the sharp rise is still clear. There may not be much of a lag between the urban and rural spread of infection during this wave,” Banaji added.

Testing is unlikely to keep up with the scale of this wave. Vaccination continues to remain our way forward. VK Paul, member-health, NITI Aayog has stated that no mixing of doses will take place for booster shot administration.

The drive will begin for healthcare workers and those above 60 years of age with comorbidities from January 10. India has fully vaccinated 44 per cent of its population, while more than four million children were inoculated on January 3, the first day of the drive, according to Our World in Data.

With 58,097 new cases in the last 24 hours, infections have skyrocketed in India in the past week, increasing 6.3 times during this duration, the health ministry noted in its briefing on January 5, 2022.

Hospitalisation is at around 4 per cent across India, significantly lower than the 20 per cent during the second wave. However, this figure may change given the third wave has just begun.