India’s pharmaceutical industry is being flooded with deals at a time when the country is in the middle of a second wave of COVID-19 infections. Domestic demand is high too but the country has managed to fully immunised barely 0.9 per cent of its adult population with double doses of the vaccine; another 12.7 million people have received a single dose till the first week of April, according to data with the Johns Hopkins University. There are reports of shortages across the country — from Odisha, Gujarat, Rajasthan and Maharashtra.

The two Indian manufacturers are producing about 70 million doses a month right now. The country, however, needs around 90 million doses every month to ensure the vaccination drive continues without a glitch.

This strain on India’s vaccine industry is being felt both within the country and abroad. On March 25, GAVI notified that deliveries of Covishield will be delayed in March and April. Though the government says it has not put any restriction on exports, Adar Poonawalla, chairperson of SII, claims that this shortage has happened because of increased domestic demand. In a recent interview, he suggested that the government should pay Rs 3,000 crore to the company to ramp up its production.

Bharat Biotech, the lone Indian company with exclusive manufacturing rights of Covaxin, is also struggling to cater to the growing demand. This is a cause for concern as the vaccine is the easiest to scale up because it has been developed by the Indian Council of Medical Research (ICMR), the country’s apex body for formulation, coordination and promotion of biomedical research.

On March 17, the Union health ministry set up a six-member inter-governmental panel to explore to look at ways to ramp up vaccine production. “Among other things, we have suggested Bharat Biotech and SII to set up more sites or repurpose the existing facilities to produce the vaccine,” says Samiran Panda, head of epidemiology and communicable diseases division at ICMR, who is part of the panel.

Bharat Biotech has subsequently announced that it will increase its production by seven-fold by manufacturing COVID-19 vaccine at its facilities in Malur in Karnataka and Ankleshwar in Gujarat. It is currently being produced at the company’s Hyderabad facility. 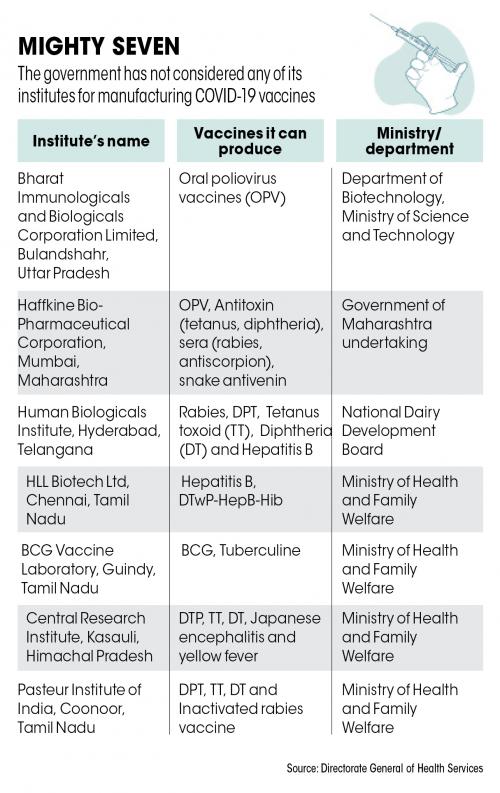 In 2008, the Union government cancelled the manufacturing licences of three of these public sector undertakings (PSUs)—CRI, BCGVL and PII—for not meeting good manufacturing practices under the Drugs and Cosmetics Rules 1945. The three PSUs, set up in pre-Independence India, were reopened in 2012 because of public interest petition in the Supreme Court, and castigation by the parliamentary committee on health.

In July 2019, Union health minister of state Ashwini Kumar Choubey said the units were in different stages of vaccine production for supplying to the country’s Universal Immunisation Programme. But the data provided by him suggests otherwise.

Similarly, BCGVL’s manufacturing plant in Guindy, Tamil Nadu, has not produ-ced a vial between 2016 and 2020, despite an installed capacity of 80 million doses of bcg vaccine a year. The first batch of 450,000 doses was only rolled out in July 2020.

The Centre has assigned a new role to CRI. When the Sputnik V and AstraZeneca vaccines came to the country, it carried out safety tests on them before they were allowed to be used in a clinical trial. The psu also provides adverse events following immunisation (aefi) assessment services to the government.]

Public health experts question ICMR’s decision to partner with a private firm alone for manufacturing covaxin. “The government can ask Bharat Biotech to transfer the technologies to PSUs and other private companies in the country through the provision of compulsory licensing,” says Malini Aisola of the All India Drug Action Network, an alliance of non-profits working towards improved access to essential medicines. With a little investment, these PSUs can enhance the production capacity of COVID-19 vaccines, says K M Gopakumar of Third World Network, an advocacy organisation. "We need political will to make this happen," he adds.

It is not that people have forgotten about PSUs. On March 17, Maharashtra’s chief minister Uddhav Thackeray at a video-conferencing asked Prime Minister Narendra Modi to allow the transfer of covaxin technology to state-owned Haffkine Institute in Mumbai. For this, the institute would need money to upgrade and has asked for funds from the centre under the recently launched Mission COVID Suraksha. The Centre has not yet given a go-ahead.

The country also has a state-of-the-art Integrated Vaccine Complex based in Chengalpattu, Tamil Nadu that has been lying idle since its inauguration in 2016. The Centre came up with the idea of the 40-hectare complex in 2008 after the manufacturing licences of the three PSUs were cancelled. The facility was meant to be the nodal centre for manufacturing, research and supply of vaccines at affordable prices under the government’s Universal Immunisation Programme. So far, it has not developed a single vaccine.

In January 2020, Bharat Biotech offered to provide Rs 600 crore to revive the complex. The discussions did not move forward. On January 9, 2021, just days before India’s vaccination drive began, Union Minister of Health and Family Welfare Harsh Vardhan visited the plant to inspect the facilities. On January 16, 2021, HLL Lifecare Limited, the psu that is running the complex through its subsidiary HLL Biotech Ltd, issued an expression of interest from vaccine manufacturers to use the plant.

“The facility has the infrastructure, trained technicians and scientists for the production of vaccine and could contribute in the production of Covaxin,” says C S Rex Sargunam, president of the Tamil Nadu Health Development Association, a non-government organisation.

India is not the only country where the public sector has been sidelined. Stuart Blume, professor emeritus at the Faculty of Social and Behavioural Sciences in the University of Amsterdam, the Netherlands, explains that the 1980s saw the rise of neoliberal thinking and privatisation of health services. “Experts in the 1980s insisted on patents and intellectual property rights that were harmonised across the globe. This is what the pharmaceutical industry wanted too,” he says.

Now, COVID-19 has given the public sector a second chance, as countries are realising profit-driven private players might not be enough during a crisis. In Canada, efforts are underway to manufacture vaccines domestically. This realisation came when after identifying a vaccine candidate, the country realised it did not have the manufacturing capability to create its components.

Similarly, Cuba has started developing its own vaccine after it failed to pre-book enough doses. The first million doses of Soberana 02 vaccine are expected to be released in late April. The country is developing three more vaccine candidates: Soberana 01, Mambisa and Abdala. China and Russia have also developed vaccines through the public sector.

“In India, the public sector should be revived to its full capacity with adequate support to strengthen its inherent strengths on expertise and skilled human resource,” says Y Madhavi, researcher at the Council of Scientific and Industrial Research–National Institute of Science, Technology And Development Studies.

This may not be as straightforward as the character of the PSUs has changed over time. “The institutes we used to have can’t be reconstituted in today's climate. A new model, a good example for the world, isn’t readily available,” Blume says.

The character of immunisation has also changed in India. The country now prefers combination vaccines in the Universal Immunisation Programme and the old PSUs do not have the necessary infrastructure for that. Most new vaccines are also under patents, making it difficult for the PSUs to make them.

Officials with the Union health ministry did not respond to Down To Earth’s queries on whether it is looking at the public sector to augment vaccine production. The private players also refused to comment on whether they are considering psus for collaboration.

Madhavi says complete dependence on private industry is a mistake. There are examples where private players have failed to deliver. In 2015, a lack of vaccines led to an outbreak of Japanese encephalitis in Uttar Pradesh.

“Currently, 80 per cent of the Indian government’s need for vaccines is met by private firms in India and abroad. The prices are up to 250 per cent higher than those of the public sector, as a result pushing India’s immunisation budget up seven times in only five years,” she says.

The major fault line in the health sector that the current crisis has exposed is the absence of good policies. India, for example, has two guiding health documents and they both have opposing views. India’s National Vaccine Policy 2011 encourages public-private partnership, but its National Health Policy 2017 focuses on building more public sector manufacturing units to generate healthy competition, uninterrupted supply of quality vaccines and anti-sera.

On ground, only privatisation is happening. The way to move forward would be to provide a level playing field for both public and private sectors with around 50 per cent of vaccine production to remain with the public sector. All vaccines which are of national importance should be reserved for the public sector says Madhavi.

This would help in another way. The focus on COVID-19 vaccine could take away resources from the vaccines used in the Universal Immunization Programme and routine immunisation in children could be derailed. While the private is busy fighting the pandemic, the PSUs could at least avert this shortage.

The COVID-19 situation clearly shows that countries, not the pharmaceutical companies, need to play a pivotal role. This must be addressed now. The world cannot wait for another pandemic to do the same.