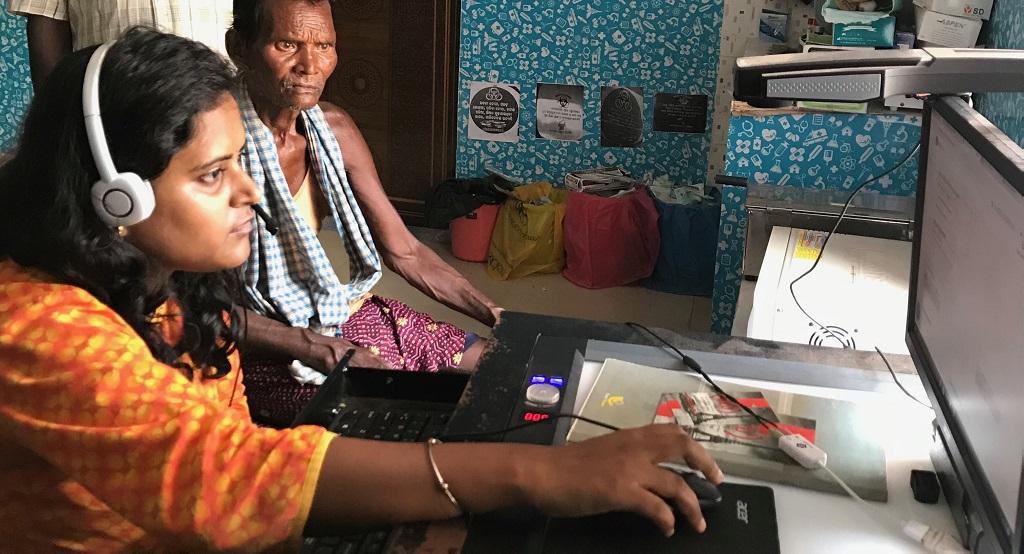 The ANM at the dispensary feeds in the patients’ symptoms into the software based on which the system connects to the best available doctor online at the time. Photo: Chinmayi Shalya

Donning a set of headphones, Priya Prusty diligently moves the mouse of her computer to select a name under the ‘patient’ tab and then goes on to select the available ‘doctor’. Sitting next to her is a man, who has come from a neighbouring village to consult a doctor for his stomach problem. In an instant, the doctor’s face appears on the screen and the consultation begins.

The patient was sitting at the recently set-up digital dispensary at Bamnipal village in Keonjhar’s Harichandanpur area in Odisha. Prusty, who is an auxiliary nurse midwife (ANM), connected him to a doctor 160 kilometers away in Bhubaneswar, via Internet.

The flow of patients is steady, about 30-40 everyday, said Prusty while taking a break. It’s about noon and patients have already consulted two general medicine doctors and a child specialist from Bhubaneswar, one gynaecologist from Kolkata and a skin specialist sitting in Rajasthan.

The dispensary has a small lab where tests for malaria, hepatitis, haemoglobin, dengue, HIV, strip-based tests such as pregnancy and urine tests and ECG can be done; and a small pharmacy that provides medicines free of cost. It has been set up through funds available with the District Mineral Foundation (DMF) Trust.

Non-profit DMF trusts have been established in every mining district of India to “work for the interest and benefit of people and areas affected by mining related operations”. DMFs have been set up following an amendment in the Mines and Mineral (Development and Regulation) Act, in 2015.

Currently, DMFs across the country have a cumulative collection of Rs 30,000 crore. Keonjhar is the topmost district in India with a current standing collection of more than Rs 3,000 crore.

The central and state governments have outlined certain ‘high priority’ areas, including affordable and accessible healthcare, on which this money must be spent on.

Healthcare accessibility in rural parts of Keonjhar district, where most of the mining takes place, is extremely poor. Only about four per cent villages in Keonjhar have a primary health centre (PHC) within the stipulated five-kilometre distance, according to Brookings Health Monitor, which is based on government data and standards. Locals tell that many PHCs in the district face shortage of medicines, resources and even ANMs and doctor.

“Getting good health staff in rural areas is a big challenge. To address this, one of the mechanisms adopted right now is digital dispensaries,” said Prasanna Venkatakrishnan from Keonjhar DMF, Project Management Unit (PMU).

Eight digital dispensaries have been set up by the district, through DMF so far on a pilot basis, in big mining-affected blocks such as Banspal and Joda and in marginally-affected Harichandanpur. The district has also engaged with Glocal healthcare, which specialises in rural healthcare services, in a public-private-partnership (PPP) model to deliver the service.

Infrastructure and equipments for each digital dispensary cost Rs 10 lakh. In addition, the DMFT pays Rs 165 per patient. In a place like Bamnipal, with a flow of about 40 patients daily, the recurring cost is Rs 24 lakh annually, including consultation, diagnostics and medicines.

The ANM at the dispensary feeds in the patients’ symptoms into the software based on which the system connects to the best available doctor online at the time. “The doctor prescribes the treatment or recommends basic tests. In cases where further examination or specialist intervention is required, they ask for a referral,” said a district official overseeing the initiative.

Barring delivery services and counseling services for family planning, nutrition etc, the dispensaries are providing most of the out-patient services that typically a PHC would provide.

“The idea is to ensure that the first line of healthcare is services are delivered to people, particularly in remote areas which currently have a dearth of human and other resources at the PHC level,” said Ashish Thakare, district collector at Keonjhar. “By using digital technology, this gap can be bridged to a certain extent through the dispensaries,” he said.

Seeing the success of the pilot project, Odisha government is expanding this to other districts in the state where healthcare services are poor.

However, there are certain operational challenges that the district must resolve going ahead.  First is improvement in primary healthcare services needs to be scaled across the district. Second, reliability and reach of internet services in rural areas is limited.