Conflict, inequality and complacency caused the stagnation and affected the poorest, most marginalised, those touched by conflict or forced from their homes, the most

More than one in 10 children in the world did not receive life saving vaccines for diseases such as measles, diphtheria and tetanus in 2018, owing to stagnation in global vaccination rates, according to a joint report by World Health Organization (WHO) and United Nations Children's Fund (UNICEF).

While conflict, inequality and complacency caused the stagnation, the children missed often included those at most risk — the poorest, the most marginalised, those touched by conflict or forced from their homes, the report found.

Since 2010, vaccination coverage with three doses of diphtheria, tetanus and pertussis (DTP3) and one dose of the measles vaccine is stuck at around 86 per cent. To prevent outbreaks, at least 95 per cent coverage is needed, according to WHO.

“Vaccines are one of our most important tools for preventing outbreaks and keeping the world safe,” Tedros Adhanom Ghebreyesus, director-general, WHO, said in a release.

“While most children today are being vaccinated, far too many are left behind” he added.

In 2018, almost 350,000 measles cases were reported globally, more than doubling from 2017. These outbreaks are the result of gaps in coverage, the report said. 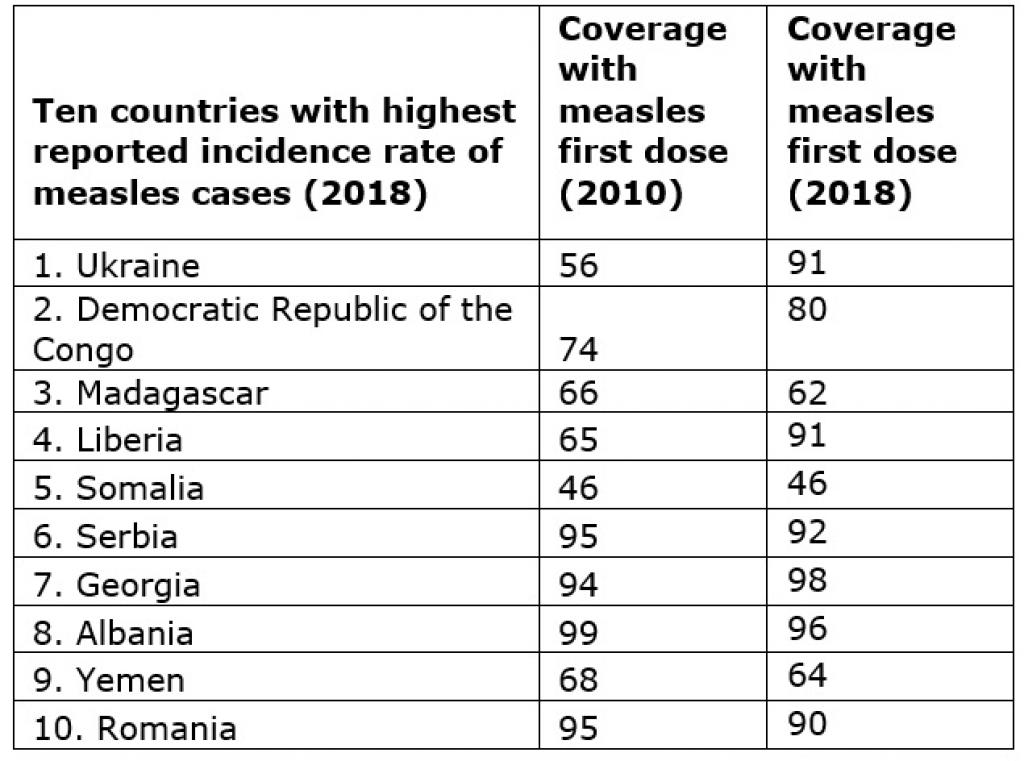 The vaccine has been adopted by 90 countries — home to one in three girls worldwide — till 2018. However, just 13 of these are low-income countries, leaving most girls at risk of cervical cancer less likely to have access to the vaccine, the report said.

Lack of trust has also emerged a major reason for stagnation of vaccination rates.

The use of vaccines has been linked to diseases such as autism and attention deficit disorder and many parents now refuse to get their children vaccinated. Some people do not vaccinate their children owing to their religious beliefs.

To force these “anti-vaxxers” to get their children vaccinated, governments across the world have also come up with various laws.

United States' New York recently passed a law to eliminate exemptions to school vaccination requirements on the basis of religious beliefs. While parents filed a suit to block the law, it was rejected by the State Supreme Court.

Sri Lanka, on the other hand, has eliminated measles, WHO reported on July 8. It has become the fourth country in WHO South-East Asia Region, after Bhutan, Maldives and Timor-Leste, to eliminate measles ahead of the 2020 regional target.

Sri Lanka reported its last case of measles caused by an indigenous virus in May 2016. Sporadic cases, reported in the last three years have all been importations that were quickly detected, investigated and rapidly responded to. The country has 95 per cent vaccination coverage.