India is not going to sequence 5 per cent samples due to high caseload, says National Centre for Disease Control 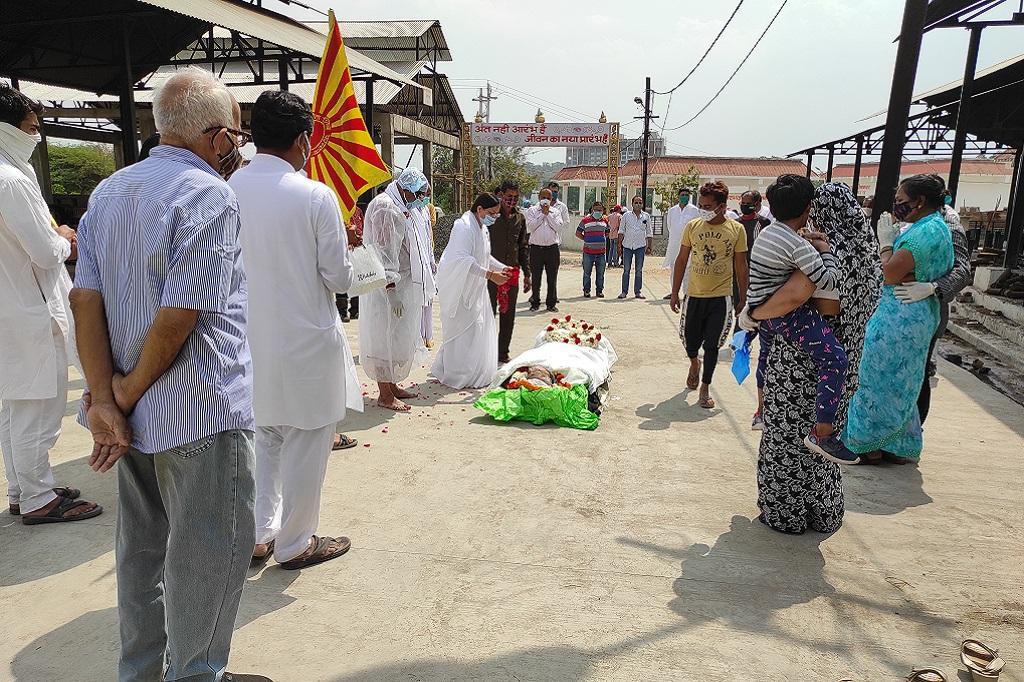 A dead body before being cremated at the Bhadbhada Crematorium in Bhopal. Photo: Rakesh Kumar Malviya

In a first, heads of the government’s top-notch institutes hinted that the second wave of the novel coronavirus (SARS-CoV-2) in India might have been driven by its variants, at a webinar April 23, 2021.

Sujeet Singh, director of the National Centre for Disease Control (NCDC) said it had been decided to sequence 15-30 samples every month given that sequencing was a cost-intensive exercise and that cases were rising.

Singh’s statement is a clear departure from the earlier stated goal of the government. The government had previously said it would sequence five per cent of all positive samples.

The ‘Indian variant’ of SARS-CoV-2, belonging to the B.1.617 lineage, has infected as many as 732 people across 13 states of the country, Singh said during the webinar. Two of the 732 persons were international travellers while the rest were Indian citizens, Singh added.

The B.1.617 lineage has two key mutations on the receptor binding domain of the spike protein of the virus — L452R and E484Q. This variant has a total of 13 more mutations but all of them are not in the spike protein that actually binds with cells to gain entry into the human body. The scientific literature says the E484Q mutation can possibly escape antibody neutralisation while L452R can increase the rate of transmission of infection.

Punjab’s surge has been driven by the UK variant. In the case of Maharashtra, the ‘Indian variant’ is the key factor. It has been found in more than 50 per cent samples there, Singh said. 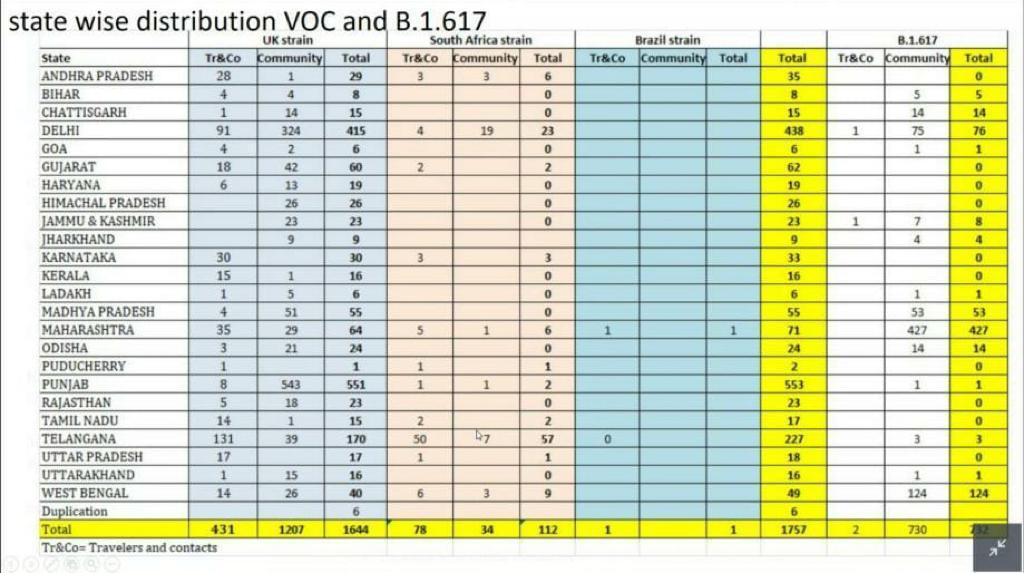 An analysis of the various SARS-CoV-2 variants circulating in India. Source: NCDC

The South African variant has been found in 112 samples in different states and the Brazilian variant in 1,757 samples.

The UK variant is 50 per cent more transmissible. It is not associated with greater severity. But increased hospitalisation and case fatality could lead to more severity and lethality.

Down To Earth asked the experts whether the ‘Indian variant’ was more transmissible and lethal. The question was not answered. However, virologist Shahid Jameel said “preliminary information suggests both Indian vaccines work against the Indian variant though a lot more research is needed.”

The Indian Council of Medical Research (ICMR) had tweeted April 22 that Bharat Biotech International Ltd’s Covaxin worked against all other variants but did not give any data or details. It said its scientists had written a research paper that “had been sent for publication”. Covishield — the Indian version of Oxford University and AstraZeneca Plc’s vaccine — works against the UK and Brazilian variants. But it has shown only 10 per cent efficacy against the South African variant.

The Indian government has been criticised for a low volume of genome sequencing. In fact, as of now, 15,133 samples have been sequenced which is less than one per cent of the total positive cases from January.

We have targeted 100 per cent samples of international travellers. Given that sequencing is a cost-intensive exercise and also the rising number of cases, it has been decided to sequence 15-30 samples every month from the sentinel sites. The sites have already been identified and stress is on the hospitals treating clinically severe cases to understand if the variants are also leading to more severity or lethality of the disease.

It is genome sequencing that reveals which variants are circulating in which geography. At the moment, it is being done by 10 labs in India that have collectively formed a group called INSACOG. Jameel, who is chairperson of the advisory group of INSACOG, added that five more labs will be joining in.

The ‘Indian variant’ was seen in genome sequences in December 2020, Anurag Agarwal, director, Institute of Genomics and Integrative Biology, said. But India was seeing a decline in cases by then. “We see hundreds of mutations every time we sequence. There was absolutely no reason to flag a variant or a mutation of unknown character in a declining phase of an outbreak,” Agarwal said.

One of the two mutations of the ‘Indian variant’ — L452R— was associated with a spike in cases in California in December. “But the world got to know this in January-February. When we saw it coupled with other mutations in Maharashtra, we flagged it,” he added.

Agarwal also spoke about the status of the variant. “It is halfway between Variant of Interest (VoI) and Variant of Concern (VoC).” The Union Minister of Health and Family Welfare, the Niti Aayog and ICMR had incidentally maintained that the variant is only a VoI.

The variants that cause increased transmissibility confirmed through epidemiological surveys on the field, lead to more hospitalisations and deaths, reduce capacity of antibodies to neutralise, reduce vaccine efficacy and diagnosis are known as VoCs. The others are called VoIs.

So far, four variants — UK, Brazil, South Africa and California — have been recognised as VoCs globally. There is no final word on the ‘Indian variant’ though it has been found now in eight countries, with 70 per cent of the cases in India itself.

National Institute of Virology Director Priya Abraham ruled out the possibility that RT-PCR kits are not able to detect the ‘Indian variant’. She said these kits can find all the variants. She then explained why tests were reporting false negatives, as reports from various parts of country increasingly suggested. These include:

These factors may lead to departures where one could land with a false negative reporting, Abraham said.