The National Pharmaceutical Pricing Authority's efforts to reign in the private healthcare sector have been scuttled once again. Who is to be blamed? 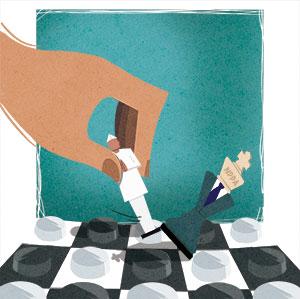 Gopendra Singh Parmar from Rajasthan’s Dholpur city travelled all the way to the Medanta Hospital in Gurugram, Haryana last December to ensure the best treatment for his son suffering from dengue. After 22 days, the hospital forcefully discharged his son after making him pay Rs 16 lakh. Two days later, his son died. Still mourning the loss of his 8-year-old son, Parmar says he is now worried about the future of his family and how he will repay the loan he was forced to take to pay the hospital. He only hopes that the administration steps in and helps him recover the money from the hospital that he claims took his son away.

While the police is yet to file an FIR against the hospital, a recent report by the National Pharmaceutical Pricing Authority (NPPA), government’s drug pricing watch-dog, triggered by a complaint filed by Parmar and three others who faced similar ordeal, has brought some respite to his family. The report, released on February 21, says private hospitals are “looting” patients to maximise profits. A few weeks later, on March 1, the agency released another report which says syringe and needle distri butors enjoy exorbitant profit margins—sometimes to the tune of over 1,000 per cent. That day, NPPA chief Bhupendra Singh was transferred to the National Authority for Chemical Weapons Convention. Close to a month on, the lone government agency to check malpractices of private healthcare sector continues without a head.

Mansukh L Mandaviya, Minister of State of Chemicals and Fertilizers, has told the media that there is “nothing unusual in his (Singh’s) transfer” and that a replacement will be hired by March-end. Health activists allege that the sudden move was taken due to a mounting pressure by the private healthcare lobby. “It is sad that the government decides to transfer NPPA head days after the agency exposes how hospitals are looting patient,” says Malini Aisola of the All India Drug Action Network (AIDAN), a civil society group which works on making healthcare accessible to all.

The report also claims that most hospitals have opened pharmacies to pressure manufacturers to print inflated maximum retail prices (MRP). “This is (a) clear case of market distortion where manufacturers after accounting for their profits print inflated MRP to meet the demands of a distorted trade channel,” it says.

The second NPAA report notes that distributors on an average earn 516 per cent profits in syringes and needles. The maximum profit margin is in the 50 ml hypodermic disposable syringe without needle which distributors buy for just Rs 16.96 and sell for Rs 97—a margin of 1,249 per cent. “The profit margins in the non-scheduled devices used in the three cases (syringes, cannula and catheters) are exorbitant and clearly a case of unethical profiteering in a failed market system,” the report says.

Under Singh, NPPA had slashed the prices of coronary stents by up to 85 per cent in February 2017 and knee implants by up to 78 per cent in August 2017. The agency had also recovered Rs 294.84 crore in 2016-17 as penalty from companies overcharging scheduled drugs, as per a Parliament reply by Mandaviya. The agency had also persuaded the All India Syringe and Needle Manufacturing Association to announce voluntary price caps. But the umbrella body of medical device manufacturers, the Medical Technology Association of India, is resisting this decision.

Gopal Dabade, a health activist and surgeon, says the medical lobby has been trying to destabilise NPPA since it was established in 2007. The agency’s role became crucial in 2013 when, acting on a Supreme Court order, it devised a formula to regulate pricing of scheduled drugs. In 2015, it released a list of 871 scheduled drugs under NLEM.

This made the industry even more uncomfortable, and it started claiming that NPPA hampers research and restricts patient’s access to good technology. At the same time, it began releasing “new expensive alternatives” by “altering dose combinations” and then roping in doctors to prescribe the expensive alternatives. “In 2013, NLEM list had 18 per cent of all the medicines available in the market. Today, it has dropped to 10 per cent,” says Aisola.

In 2016, the Ministry of Chemicals and Fertilizers unsuccessfully tried to dismantle the regulatory body which was stopped after health activists alleged that the government was siding with the private healthcare lobby. Former NPPA chief Ijneti Srinivas was also transferred in less than a year of assuming the office in 2014. Under his chair, the agency capped prices of 108 formulations, some of them non-scheduled. The industry lobby moved court against it and the government rolled back the changes. He was replaced by Singh in April 2015.

Health activists are now demanding that the government should make the agency autonomous and fix a minimum tenure for its head. This, they believe, is the only way to check the malpractices of the private healthcare sector.

(This story was first published in the April 1-15th issue of Down To Earth).