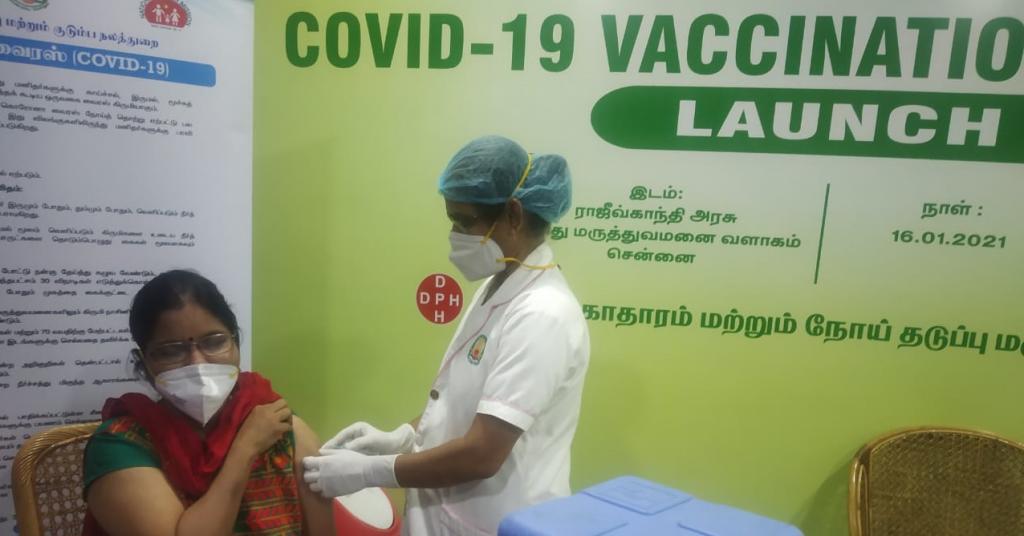 Tamil Nadu started its novel coronavirus disease (COVID-19) vaccination drive along with other states January 16, 2021 amid hesitancy among frontline and healthcare workers.

Only 6,156 people all over the state had voluntarily got vaccinated January 16 and 17, according to a government press release.

Only 2,945 people were inoculated January 16, against a target of 16,600. On January 17, many higher officials including the state health secretary, J Radhakrishnan got vaccinated to increase awareness among the public.

Two private hospitals, Apollo Hospitals and MGM Healthcare, have also initiated the vaccination drive and deans of Tamil Nadu medical colleges have got themselves vaccinated.

“The turnout was low on the very first day. But, yesterday, the process picked pace as doctors and other para medical workers showed interest in getting vaccinated,” P Vadivelan, officer on special duty in the cadre of the Department of Public Health and Preventive Medicine.

There are around 2,700 cold storage points in the state, including one state vaccine store and 10 regional vaccine stores.

“We have distributed vaccines to other districts on January 16 itself. With the facilities provided, primary health centres in rural areas have already began the drive. There was a glitch in the Co-WIN app on the first day. But now, people have started using the app,” Vadivelan said.

He also spoke about the daily target and schedules. “We don’t rely on daily targets. The process is completely voluntary. We are aiming for better results but are not pressuring the public. For Chennai, vaccinating 0.25 million people is the target and we are working on that.”

Tamil Nadu has planned to vaccinate 16 million people by this year with nearly 0.6 million health workers to be vaccinated in the first phase.

Nearly 5,874 Covishield and only 282 Covaxin doses have been used in the overall vaccinations across Tamil Nadu January 16 and 17.

GR Ravindranath, secretary of the Doctors’ Association for Social Equality pointed out key issues over the vaccination process: “All leaders including the chief and health minister should get vaccinated. The prime minister must allow state chief ministers to get vaccinated. But, the central government is not as supportive as it appears to be.”

“The prime minister wants to project himself as a world leader by showing immediate success in the vaccination drive. That is why, these drives have been processed so soon. But gaining public trust will certainly take time and our leaders should consider this by inoculating themselves,” he added.