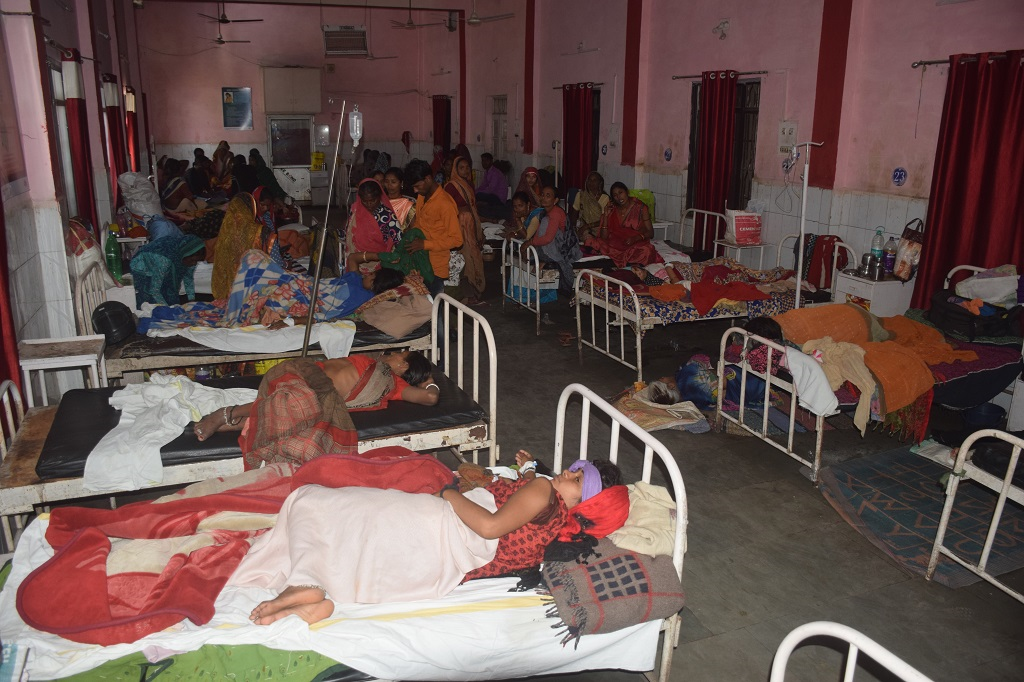 The maternal mortality ratio in Haryana's Nuh (formerly Mewat) district declined rapidly to 95 from 127 in 2018, according to district health officials. The district also boasts of an institutional delivery rate of 91 per cent, the department said.

The infant mortality rate, however, has reduced marginally, to 32 from 34.2 during the same period.

The ‘delivery hut’ in the Public Health Centre (PHC) of Ghasera village in the district looks abandoned from afar. From the inside, the ward is dingy and dark, the beds are worn out and paint is peeling off the walls.

Geeta Yadav has been working here as a staff nurse since 2015. From April 2021 to February 2022, around 2,700 deliveries were done in this facility, which has 10 staff nurses, four beds and a persisting electricity supply problem.

Before she joined, there were just two staff nurses and the same four beds, she said. “Back then, the centre would see about 100 deliveries a month. The figure has now nearly tripled, but the bed capacity has remained stagnant.” Women are discharged within six hours of giving birth, she added.

Ideally, we should keep them in observation for 48 hours even in case of a normal delivery. But we just don’t have the space.

The biggest issue in Nuh is the birth rate, she added. The district’s total fertility rate is 4.9, while that of Haryana is 2.1, according to Census 2011.

PHCs are the backbone of conducting deliveries in Nuh. Ghasera, Ujina and Sudaka villages recorded more births at PHCs than the district hospital in the past year.

Infrastructure issues have been addressed at the bigger centres in these places, but new challenges have cropped up.

At the Community Health Centre (CHC) in Punhana, four beds were occupied in the postnatal care ward by women who had given birth in the last 24 hours. Only one of them had gotten three antenatal care check ups through her pregnancy, while the others had gotten none.

All four of them were highly anaemic. All were in the 25-35 age group; one had three children while the others had eight each.

The CHC records four-five daily deliveries, with eight staff nurses, 12 beds and a gynaecologist who joined in March 2021 — infrastructure is no longer an issue. “Since last year, we have been conducting caesarean sections when needed. And in the last four years, we got an operation theatre and new born stabilisation-trained professionals,” Dr Kapil Dev, senior medical officer, said.

Most women don’t have bank accounts, so where will the money go? Under JSSK, they get direct benefits when they come to a healthcare centre for a delivery.

While the schemes have somewhat been a success in making institutional delivery more attractive, the real change in safe birth indicators came only after 2018 — when Nuh was labelled an ‘aspirational district’ by NITI Aayog.

Infrastructure has received a big push, with an aim to “quickly and effectively transform 112 most underdeveloped districts across the country”. Health officials believe this has been key in improving maternal and infant health of the district.

“Since 2018, five new PHCs and one CHC have been added,” the district’s Chief Medical Officer Dr Surender Kumar said.

Another district hospital and 17 new sub-centres have been approved for construction, and a proposal for six PHCs to be upgraded to a CHC has been sent, he added.

The staff at pre-existing PHCs was also strengthened around the same time. Delivery points are spread across one civil hospital and medical college, four CHCs and 17 PHCs, with each of them having a 24x7 functioning labour room.