The physical appearance of those with albinism is often conflated with erroneous beliefs and myths influenced by superstition, something that furthers marginalisation and social exclusion, leading to stigma and discrimination Photo: Wallpaper Flare

International Albinism Awareness Day is observed every year on June 13 to highlight the rights of those born with albinism and increase awareness of the genetic condition. The theme gains significance this year since the novel coronavirus disease (COVID-19) pandemic has resulted in the spread of misinformation against those who have albinism.

The physical appearance of those with albinism is often conflated with erroneous beliefs and myths influenced by superstition, something that furthers marginalisation and social exclusion, leading to stigma and discrimination.

In some countries, those with the genetic condition have been stigmatised and accused for spreading COVID-19, something that does not have a basis in scientific fact.

Killings, attacks, bullying and discrimination continue against people with albinism.

This day, hence, serves as a reminder that people with albinism continue to defy odds, overcome hurdles and face injustice with resilience.

‘Made To Shine’ — the chosen theme for this year’s International Albinism Awareness Day — celebrates the achievements and successes of individuals with albinism worldwide.

It is also a call for solidarity with those who have albinism and the challenges they face.

Albinism — a rare disease, according to the National Institutes of Health — is characterised by a lack of melanin pigment in skin, hair and eyes. Those with albinism are vulnerable to sun exposure, something that increases chances of skin cancer and severe visual impairment.

The condition is still not fully understood, socially or medically. Both parents must carry the gene for their child to have the condition.

Even though the parents carry the gene, they may not show any physical signs of the condition, said Sudhashree Pattanaik, a noted dermatologist from Odisha.

One out of every 17,000 people across the world have albinism. Africa and Europe have the greatest number of those with albinism.

In 2013, the United Nations Human Rights Council adopted a resolution that called for the prevention of discrimination against individuals with albinism.

The UN General Assembly proclaimed June 13 to be International Albinism Awareness Day on December 18, 2014, with it being observed for the first time in 2015. 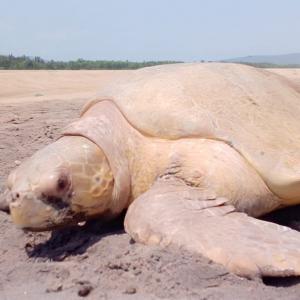 Albinism is widespread among animals as well and is caused by the absence of melanin in their bodies, said Sudhakar Kar, a noted herpetologist and former wildlife researcher in Odisha’s forest and wildlife department.

A baby albino crocodile was found in Odisha’s Bhitarkanika National Park in 1975. After her birth, forest officials kept the reptile in a pond at a crocodile rearing centre within the park.

The female baby crocodile was named gori (white) because of its colour. In 2012, forest officials discovered another albino crocodile in Bhitarkanika and kept the reptile in a pen as well, according to Kar.

Rabindranath Sahu the secretary of the Rushukulya Sea Turtle Protection Committee discovered the albino turtle, according to him.