Kumbh amid COVID-19: Protocol sinks as over 3 million take a dip 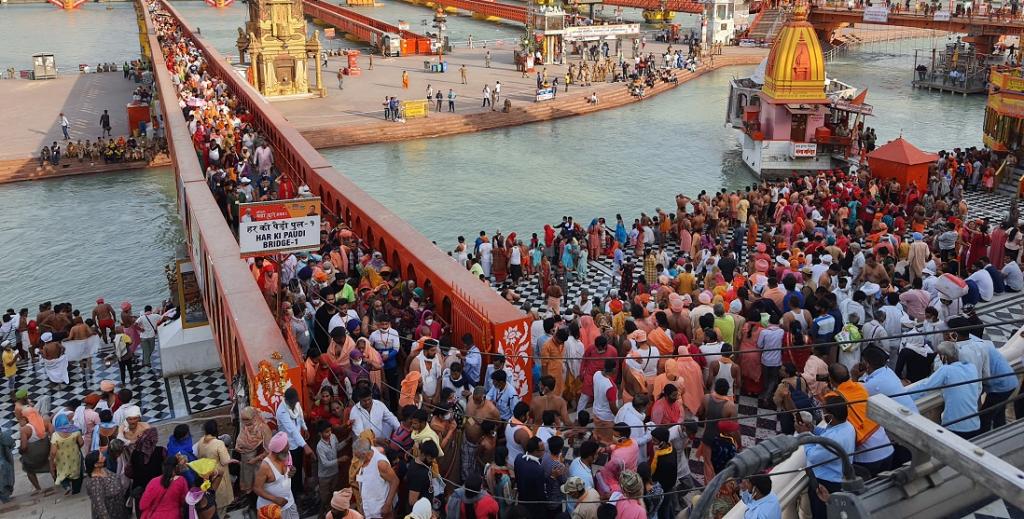 Crowds at the Har ki Pauri bathing ghat in Haridwar on the first day of the 'Shahi Snan'. Photo: Midhun Vijayan / CSE

Rules regarding novel coronavirus disease (COVID-19)-appropriate behaviour were openly flouted as millions bathed in the Ganga in Haridwar April 12, 2021 even as the second wave of the pandemic raged on.

The lackadaisical approaches of both, the administration and pilgrims, were on display in the buildup to the first Shahi Snan or ‘royal bath’, an auspicious day of the Hindu calendar.

The authorities had claimed that cameras with artificial intelligence would be installed at key points on the ghats or bathing sites that would monitor whether social distancing was being followed or not.

Ultimately though, these cameras could not be installed. Nor did any such surveillance appear on the ghats in the last three days.

The crowds started streaming into Haridwar two days before the royal bath. Down to Earth (DTE) was present at the sacred Har ki Pauri ghat on April 10 and witnessed rules like social distancing and wearing of masks being flouted on these days as well.

The Government of India, in its standard operating procedure (SoP), had urged children below 10 years of age and elderly people above 65 years of age to not visit the Kumbh. This was not heeded to, though.

A large number of such elders and children were seen moving on the 3-4 kilometre stretch of road from Haridwar to Har ki Pauri. People continued to stream onto the road throughout the day despite barricades set up and manned by the Central Industrial Security Force, police and the Rashtriya Swayamsevak Sangh.

Haridwar Chief Medical Superintendent AK Sanger told DTE that COVID-19 infection was definitely on the rise. “We are doing more antigen tests. COVID-19 infection is more common in people coming from outside. Random tests are being done in the border areas and in the fair area,” he said.

On April 11, more than 23,000 tests were conducted. Of these, 70 to 80 per cent were antigen tests. However, the Uttarakhand High Court has ordered that more than 50,000 corona checks should be done every day.

According to the Haridwar Medical Department, on April 11, 372 people in Haridwar were confirmed to be positive. The result of April 12 has not come yet.

The mahants (seers) of some akharas (religious sects) have also got COVID-19 infection. These include Juna Akhara (two positive cases), Niranjani Akhara (one positive case), etc. They have been kept in home isolation at camps.

According to Sanger, samples have been collected in some akharas after the royal bath. At the same time, the police personnel posted in the akharas, on the condition of anonymity, said their samples had been collected but added that they had not been told anything.

The next royal bath is on April 14 and April 27 respectively.