Livestock farming is a crucible for zoonotic disease; here is how

Artificial oceans of pigs and poultry in the hinterlands become mixing vessels for viruses from humans, livestock and wildlife, while other farmed animals simply act as bridging hosts 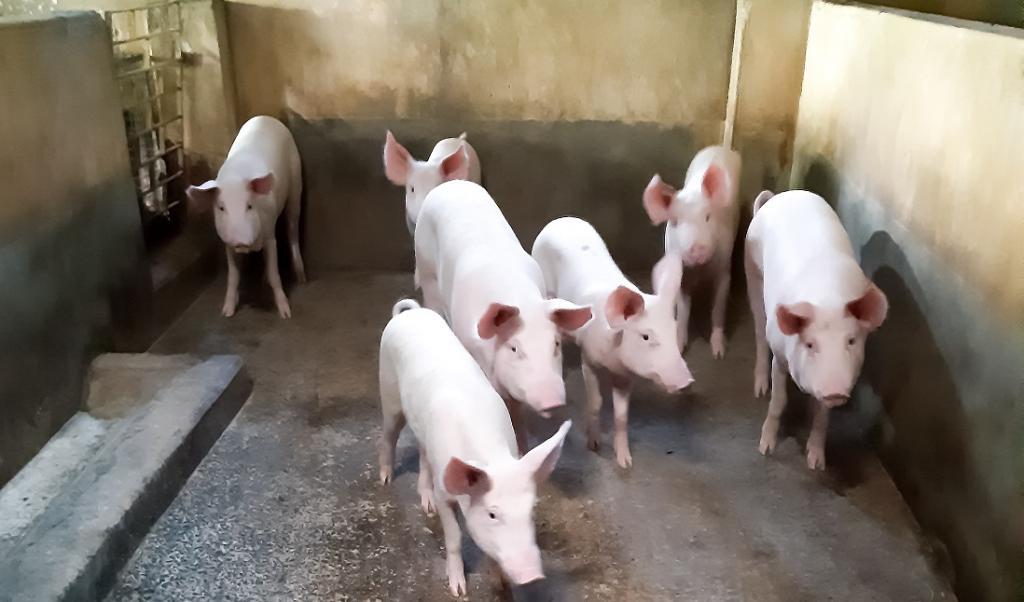 Livestock diseases have an enormous impact not only on animal health and the global food supply and economy, but also on human health.

As agriculture expands and intensifies to feed the growing human population, and natural ecosystems are converted to farm or range land, interactions increase among humans and domesticated and wild animals.

Artificial oceans of pigs and poultry in the hinterlands become mixing vessels for viruses from humans, livestock and wildlife, while other farmed animals simply act as bridging hosts, carrying the infection from wildlife to humans.

Once established in humans, these zoonotic pathogens quickly spread across our interconnected world, causing outbreaks or even deadly pandemics as humans have no immunity against the novel diseases. This has been well-demonstrated by the ongoing novel coronavirus disease (COVID-19) pandemic.

A UN report released just months after COVID-19 exploded into the world shows that in the last 170 years, nine epidemics among livestock have spilled over to people; six of them have emerged since the 1990s.

This frequent outbreak of zoonotic diseases in recent decades is clearly due to intensification of agriculture. The Guardian in an article on October 6 writes that over the past 50 years, the global population of poultry has multiplied six times to nearly 36 billion; the number of pigs has almost doubled to 952.6 million; and cattle numbers have grown from 1.1 billion to 1.5 billion.

In fact, a report “Emerging human infectious diseases and the links to global food production”, published in Nature Sustainability in June 2019, highlights that 77 per cent of livestock pathogens are capable of infecting multiple host species, including wildlife and humans.

Most of the increase in human and livestock densities are expected to occur in developing countries where disease surveillance, pest control, sanitation, and medical and veterinary care are limited, notes the Nature Sustainability report.

The maximum brunt of these is faced by poor farmers. “A billion poor livestock farmers bear the burden of zoonotic diseases. They are the ones who live with animals,” Habibar Rahman of the International Livestock research Institute (ILRI) tells DTE.

He adds that one in every seven animals suffer from one or other zoonotic diseases per year. Even if these are not transferred to humans, there is a 20 per cent production loss to the animal.

“This will create scarcity or shortage of animal sourced food like milk, meat and egg. We have to protect our animals from zoonotic diseases as this is a matter of nutritional and food security for humans,” Rahman says. 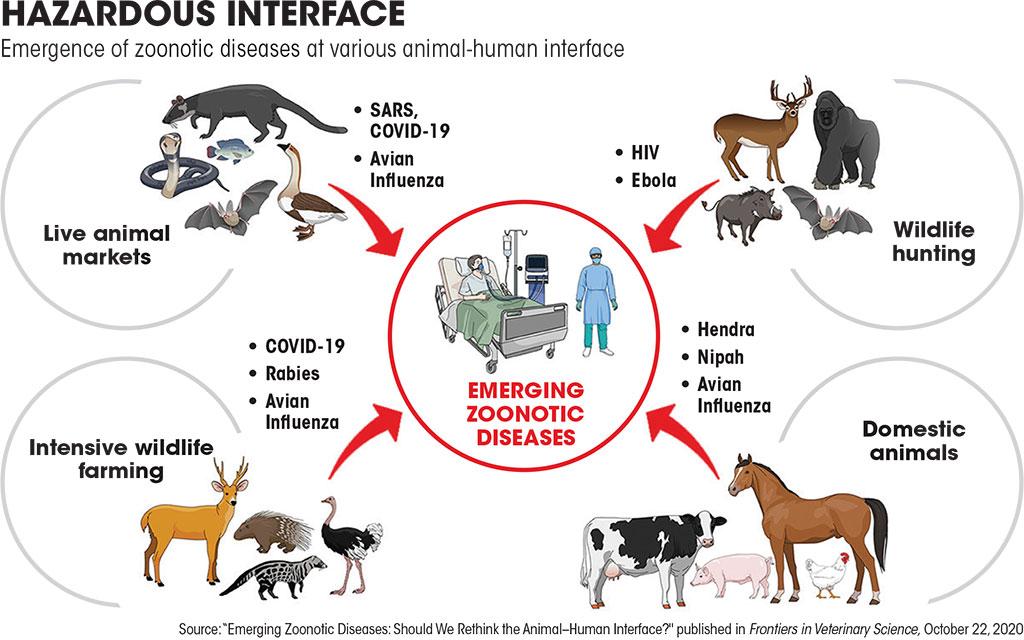 According to ILRI, India is among the four countries — the other three are Ethiopia, Nigeria and Tanzania — that suffer from the highest zoonotic disease burden, with widespread illness and death.

In fact, of the 13 livestock diseases monitored by the National Institute of Veterinary Epidemiology and Disease Informatics (NIVEDI), four are zoonotic.

These are anthrax (highly infectious bacterial illness that can affect a person’s skin, lungs or intestine when they come in contact with infected animals, eat contaminated meat or inhale the bacteria spores); babesiosis (a life-threatening parasitic disease that can transmit to humans via tick bite, blood transfusion or from an infected mother to her baby); fasciolosis (a parasitic worm infection that is acquired by eating contaminated watercress or other water plants); and trypansomosis or sleeping sickness (a parasitic disease that causes fever, fatigue, dullness and swollen lymohnodes and is transmitted by tsetse flies).

More such zoonoses are either endemic to the country or are reemerging. One such is buffalopox. In 2018, it infected 28 milkers in Maharashtra’s Dhule district, who had close contact with buffalos.

To pre-empt potential disease outbreaks, NIVEDI issues forewarning every month. The institute claims that its forewarning, which has above 90 per cent accuracy, has helped stakeholders take preventive measures in time. However, “there are [sic] expected to be under reporting and also non-reporting of cases”, it states in the October 2022 bulletin.

During DTE’s visit across Rajasthan, a veterinarian said on the condition of anonymity, “If we report about an outbreak, say of foot-and-mouth disease, it is seen as an inconvenience by the higher authorities who then accuse us of not properly carrying out vaccinations.”

Officials also cite lack of coordination in the disease reporting system. For instance, zoonoses like rabies and anthrax are tracked separately for livestock and for humans.

“In 2019, when lumpy skin disease entered India, the Centre approved goat pox vaccine as a preventive measure. The states were also asked to take strict measures in respect of quarantine and trade but the diseases were not handled in the required way,” he says.

To build a connected livestock disease programme that can integrate wildlife and human disease to inform about the movements and control of zoonotic diseases, the Department of Animal Husbandry and Dairying in 2020 launched the National Digital Livestock Mission (NDLM).

It aims to tag all the 500 million major livestock in the country with a unique 12-digit identification (ID) number, just like the Aadhaar card for people.

So far, 245 million animals have been tagged, with their details like age, breed, milk yield, vaccinations and dates of artificial insemination and delivery of calf, recorded in a central database.

This ID will serve as the foundation for all state and national programmes, including vaccination. Disease modelling and surveillance for prevention and control of livestock diseases will be done through mobile veterinary units, connected with toll free helpline number, 1962.

“Suppose a farmer calls the number for reporting a problem with the animal, an executive will be able to access the animal’s history using its unique ID and provide information based on that,” informs Malik. “If one village reports 10-20 cases of a similar nature, an alert will be generated to check if a disease is emerging,” he says.

Analysts appreciate the digital architecture of NDLM, but emphasise on the need for better infrastructure and diagnostic system.

“India already has mobile dispensaries for livestock diseases. They should be strengthened and made accountable to panchayats. Scientists should visit villages once or twice a month for sampling and awareness,” says Pratap Birthal, director, National Institute of Agricultural Economics and Policy Research under ICAR. He says vaccination should be done on the lines of polio eradication.

Besides, in the absence of regional diagnostic centres, veterinarians have to depend on the National Institute of High Security Animal Diseases in Bhopal, which takes 10-15 days to send the result, says Bardhan.

He says the lack of facilities and centralisation of diagnostic processes are the reason African swine fever could not be contained in the Northeast. The emerging diseases have provided a wake-up call.

Bardhan says with increasing trade there is also a chance of importing Rift valley fever from Africa. “It appears improbable now, but then, till few years ago, we did not think of dealing with lumpy skin disease,” he says.