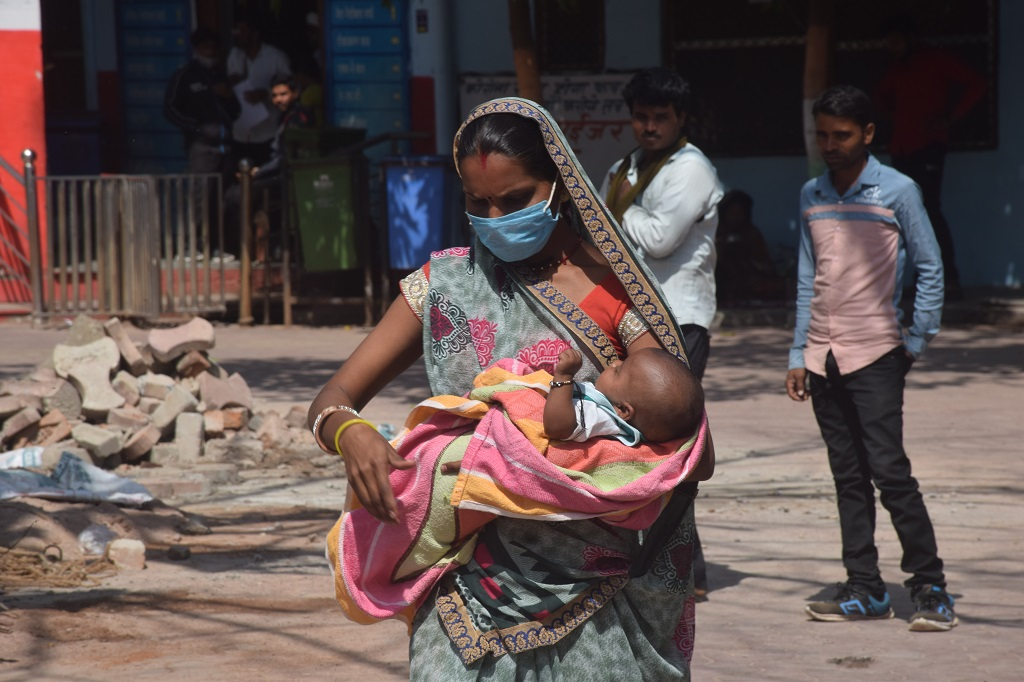 All the 28 beds in the maternal care ward in the Tikamgarh District Hospital in Madhya Pradesh are occupied. This has been the case for most of the past decade.

The driving force behind local women opting for institutional delivery has been the slew of government schemes that have incentivised it — either through conditional cash transfers or other benefits. However, the infrastructure is unable to keep up with the demand and safe births are not guaranteed.

Sarita (name changed), 19, who had given birth at the Tikamgarh District Hospital, was in distress. The child was born severely underweight, was vomiting and had been admitted in the sick new-born care unit for the past week. “I have no idea how my son is feeling,” she said.

With a capacity of 102 beds, four senior doctors, nine medical officers and 20 nurses, the staff is stretched thin. The hospital sees 30-40 daily deliveries on an average.

A nurse at the hospital said on the condition of anonymity:

Ideally, a mother should remain in the facility for 48-72 hours after a normal delivery for observation. But we are not always able to do that because there is just not enough space.

“So in the case of a normal delivery, we discharge the women within a day,” she added.

At the beginning of the last decade, all the women who required a caesarean section had to be referred to Jhansi Medical College — a two-and-a-half-hour drive. Between 2015 and 2020, the district hospital had only one doctor equipped who could perform a C-section. Today, that figure has increased to four, a hospital source said,

The local women give birth at hospitals but rarely seek care through their pregnancy. Of the 28 women in the ward, only one went for three antenatal care (ANC) check-ups during her pregnancy, while others went for either two or none.

Only half the women in the district get an ANC check-up in the first trimester, said Aditya Tiwari, district programme manager of the National Health Mission. In the absence of regular check-ups, chances of the baby being born premature or underweight are high, he added.

Take the case of Sarita: Her baby is currently in the SNCU, which has a total capacity of 20 beds and a 150 per cent occupancy rate.

Of all deliveries, 10-12 per cent of them are admitted to the SNCU for reasons ranging from premature deliveries to birth asphyxiation, Dr Kamlesh Sutrakar, SNCU in-charge said, adding that the neonatal mortality rate of the hospital is also in the same range.

“Women come to deliver in the hospital because of the money they get, but they have not been made aware about the proper nutrition they need,” Dr Sutrakar said, adding that 2-3 per cent of all babies in the SNCU are referred to the Jhansi Medical College due to complexity of a case.

A majority of the 1.1 million population of the district resides in rural areas. “Since women in rural areas have more children, they are more likely to be anaemic, while poor nutrition is another key concern,” Dr Priyanka Sharma, a gynaecologist at the district hospital explained, listing postpartum haemorrhage, hypertension and anaemia as leading causes of maternal deaths.

These are factors that explain why despite 89 per cent of all births taking place at health centres, other indicators of a safe birth remain high. The district’s neonatal mortality rate is 30, while the maternal mortality ratio of the Sagar division — which includes Panna, Tikamgarh, Damoh, Sagar, Chhatarpur and Niwari districts — is 189, said Tiwari.

“Every PHC and CHC has a staff shortage, some are running on half the strength required while others don’t have any nurses at all,” Tiwari said. Of the 22 PHCs, only half have a 24x7 labour room, and while the infrastructure of a Newborn Stabilisation Unit is there in Jatara and Prithvipur, it is not functional.

“Lack of expertise is an issue that has been plaguing us for a very long time. Institutional births are on the rise but there is a desperate need to reorient the staff so that they are well trained to handle complex cases,” said Dr PK Mahore, the Chief Medical Health Officer of Tikamgarh.

Several studies have concluded that an increase in institutional delivery doesn’t guarantee a reduced MMR, raising “questions about the quality of care offered at facilities,” a 2014 paper published in Science argues. Another study, published in 2013 in PLOS which assessed the association between institutional birth proportion and maternal mortality notes: “Women in rural areas reach lower level facilities which are ill-equipped to handle complications. These inadequacies present a challenge to a mother having a safe delivery, even if she reached a facility.”