Measles is back: cases reported in countries that had eradicated the disease

With outbreaks reported from across the world, measles' eradication by 2020 seems difficult 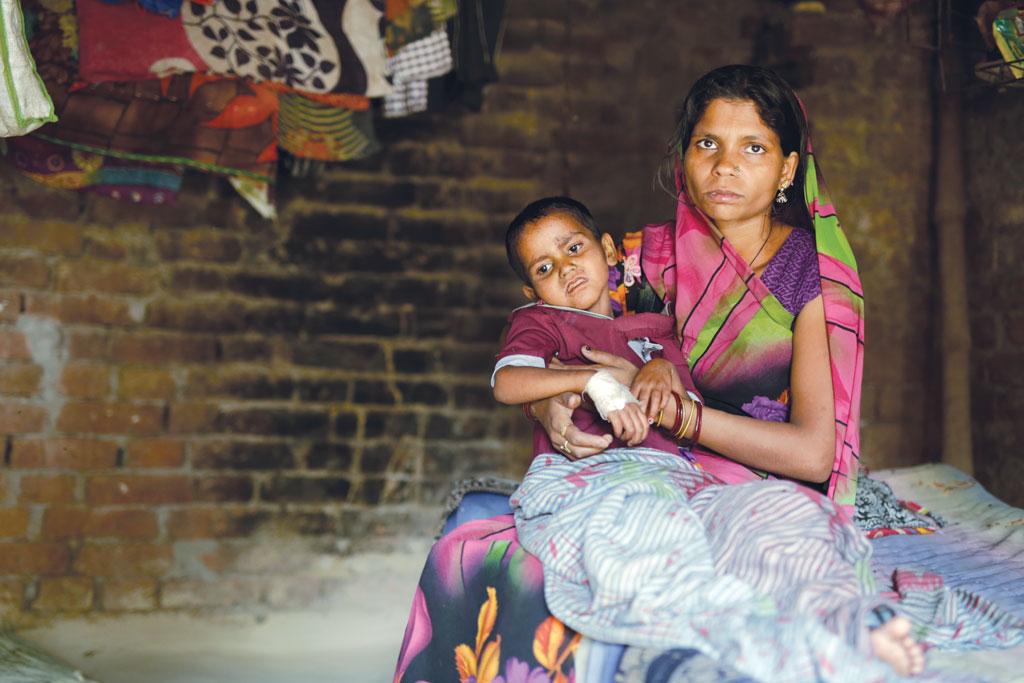 Narainpur Kanhauli, a small village in eastern Uttar Pradesh’s Jaunpur district is in the throes of an epidemic; one that is killing children. Hushna Mohammad’s two-and-a-half-year-old daughter Lucky was one of the victims. Her family was hoping that traditional remedies would cure her of the rashes. But she passed away on April 16. The family was trying to cope with the loss when Lucky’s cousin, one-and-a-half-year-old Khushi, daughter of Rashid Mohammad, developed the same symptoms and had to be rushed to the district hospital. She died on April 18. Bitty, two-year-old daughter of Jan Mohammad, Hushna’s brother, was the next victim. At least eight children of this extended family have been affected by the disease in the last month. But this is not the only family suffering from the disease. Among others is six-year-old Tuba, daughter of Aseem Mohammad. The child, known for her chirpiness in the community, was lying quietly on a bed when the Down To Earth team went to Narainpur on April 30.

Her mother Hadeesu complained that the child was neither eating nor drinking. The family had taken her to the district hospital but doctors referred her to the Banaras Hindu University in Varanasi. On May 3, Tuba also died.

These children belong to the marginalised Muslim Nat community. Five children of the powerful Yadav caste in the area took ill too but survived.

The area’s Chief Medical Officer (CMO), Ravindra Kumar says that the disease is measles, a vaccine-preventable disease caused by an airborne virus of the paramyxovirus family. When asked, the villagers said that nobody came to vaccinate the children. However, Bhagwanti Yadav, local health worker, said the villagers did not allow vaccination despite efforts by medical staff. “They hide the children when we come,” she said. When Rashid Mohammad was asked the reason, he said that the vaccine would make their children sick and impotent. CMO Kumar said that this unwillingness to vaccinate is why measles is common in Jaunpur and other districts of Uttar Pradesh.

The state is one of the focus areas of measles vaccination in India. An assessment carried out by the Union Ministry of Health and Family Welfare (MoHFW) for the year 2016-2017 shows that only 77.1 per cent of children under the age of one year received it. This is lower than the national average of 83.7 per cent.

India is not the only country reporting measles cases. A World Health Organization document shows that as many as 77 countries have reported cases this year. In Europe, Italy and Romania are the worst-affected. Romania reported 317 confirmed cases as of April 11. In Italy, 684 cases have been reported (see `An old enemy strikes again'). It is expected that the number of measles cases in Europe in 2017 would be more than 850 reported in 2016. In the United States, 61 people from 10 states reported measles between January 1 and April 22, 2017. It had been eradicated from the United States in 2000.

Australia too is witnessing an outbreak. Sydney’s western suburbs reported 16 locally acquired cases till mid-April. New South Wales, where Sydney is located, has reported 23 cases this year. Unlike these developed nations, cases in Africa and Asia are not making news. In all areas reporting measles, the cause has been attributed to lack of vaccination. 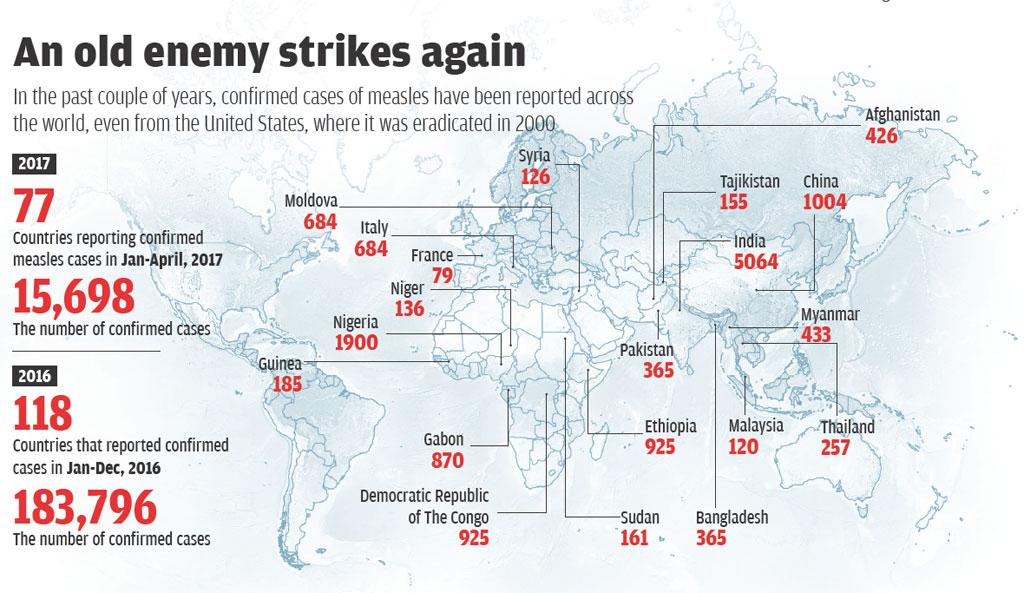 This does not come as a surprise as there is a massive global campaign against vaccines in general. It is often pointed out that diseases like measles and rubella were non-fatal before the advent of vaccines. They would occur in childhood and provide life-long immunity. Continuous exposure to the virus would work like booster doses and increase antibodies against the disease. This immunity would also pass from mother to child. With the coming of vaccines, this natural immunity was lost, explains a doctor, requesting anonymity due to pressures from the vaccine lobby. He believes that because of this, it would be impossible to meet the target of measles eradication by 2020 not just in India but globally. Meeting the target would be more difficult for India which accounts for 37 per cent of global measles deaths. This year, a total of 5,064 cases of confirmed measles have been reported from the country.

The government is trying to increase vaccination coverage. In the Rajya Sabha’s March session, Minister of State for Health and Family Welfare Faggan Singh Kulaste informed that the government had been making efforts to allay parents’ apprehension and create awareness through organisations such as the Indian Academy of Pediatrics, Indian Medical Association and Lions Clubs. Health workers and schools have been trained to communicate the benefits of vaccination through personal communication.

But in Jaunpur, it seems, nothing is working. The MR vaccine, which could have made a difference is not available in this area. Even if it were, it is doubtful the populace would have used it. For Narainpur then, the trauma continues.

This story was first published in the May 16-31, 2017 issue of Down To Earth magazine under the headline "Measles is back".