Not even a glimmer of hope for health worldwide, warns report

Epidemic of chronic diseases, social inequalities and COVID-19 will worsen the future of global health 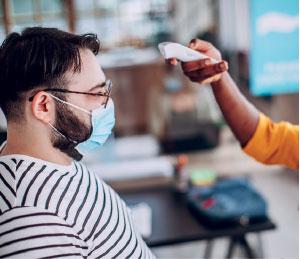 As if the novel coronavirus disease (COVID-19) pandemic was not enough, there is more bad news on the health front. The latest Global Burden of Diseases, Injuries, and Risk Factors Study, prepared by the Institute for Health Metrics and Evaluation, a United States-based research centre, shows that people are now living in poorer health for more years than ever before.

Between 1990 and 2019, disability due to poor health has risen from 21 per cent of total disease burden to about 34 per cent.

The researchers link this to the fact that though life expectancy has increased by 10 years across the world, the increase in healthy life expectancy — the number of years a person can expect to have good health — has risen by only 6.5 years during this period.

The group analysed 286 causes of death, 369 diseases and injuries, and 87 risk factors in 204 countries and territories, and found that increasing incidences of chronic diseases is behind the rise in years lived with disability.

In 11 countries, more than half of all health loss (measured by disability-adjusted life-years or DALYS that combines the years lost due to disability, illnesses and early death) is due to non-communicable diseases (NCDs) and injuries. Only six countries have seen the numbers of years spent in poor health decrease between 1990 and 2019.

Over the past decade, there has been an increase in exposure to risks like obesity, high blood sugar, consumption of alcohol and use of drugs. For instance, metabolic risks (high body mass index, or BMI, high blood sugar, high blood pressure, and high cholesterol) have risen by 1.5 per cent a year since 2010.

Metabolic risks accounted for nearly 20 per cent of total health loss worldwide in 2019 — 50 per cent higher than in 1990. They are also responsible for a huge number of deaths globally — high blood press ure contributed to one in five deaths (almost 11 million) in 2019; high blood sugar to 6.5 million; high BMI to 5 million; and high cholesterol to 4.4 million deaths.

“Most of the risk factors are preventable and treatable, and tackling them will bring huge social and economic benefits. We are failing to change unhealthy behaviours, particularly those related to diet quality, calorie intake and physical activity, in part due to inadequate policy attention and funding for public health and behavioural research,” says Christopher Murray, director, Institute for Health Metrics and Evaluation (IHME), University of Washington, USA, who led the research.

Unfortunately, there is often a bitter opposition by industry if efforts to control risk factors such as high sugar foods or red meat are taken. The industry suggests that as the food per se is not bad, the decision of consumption and the amounts consumed should be left to people. However, providing inform ation has not been found enough.

“Given that individual choices are influenced by financial considerat ions, education and the availability of alternatives, governments should collaborate globally on initiatives to make healthier behaviour possible for everyone. At a time when there is a major risk to population health from factors such as obesity, government should draw lessons from the decades of tobacco control programmes and take action through regulation, taxation and, maybe, subsidies,” says Emmanuela Gakidou of IHME.

Another major aspect revealed by the report is that most of the improvement in health indicators in recent years has occurred in children. The top 10 contributors to disease burden over the past 30 years include six causes that largely affect older adults:

The fact that elderly have poor health indicators has fuelled COVID-19 deaths.

The report points out that social and economic development is important to overall health and there is a need for a much broader approach that pays more attention to all the drivers of population health.

“Given the overwhelming impact of social and economic development on health progress, doubling down on policies and strategies that stimulate economic growth, expand access to schooling, and improve the status of women, should be our collective priority,” says Murray.

“COVID-19 is an acute-on-chronic health emergency. And the chronicity of the present crisis is being ignored at our future peril. NCDs have played a critical role in driving more than 1 million deaths caused by COVID-19 to date, and will continue to shape health in every country after the pandemic subsides. As we address how to regenerate our health systems in the wake of COVID-19, this Global Burden of Disease study offers a means of targeting where the need is greatest, and how it differs between countries,” says Richard Horton, editor-in-chief of The Lancet, which published the report. 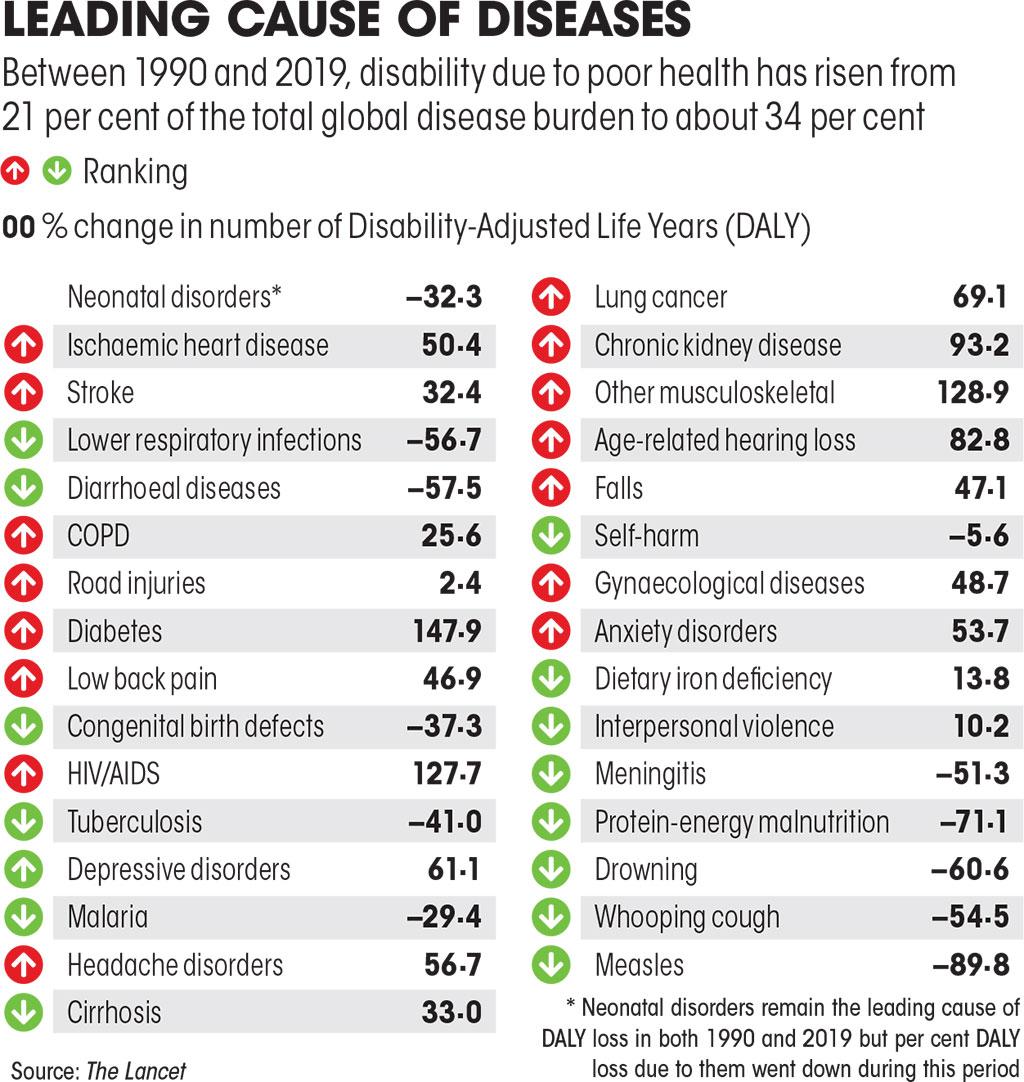 No country would benefit more from urgent action than India where 58 per cent of the total disease burden now is due to NCDs, up from 29 per cent in 1990. Premature deaths due to NCDs have more than doubled from 22 per cent to 50 per cent. This is despite the fact that India has been active in trying to reduce the burden of NCDs for a long time now.

In 2010, the Union government launched the National Programme for Prevention and Control of Cancer, Diabetes, Cardiovascular Diseases and Stroke. In line with WHO’s Global Action Plan (2013-2020) to prevent and control NCDs, India was the first country to develop specific national targets and indicators aimed to reduce the number of premature deaths from NCDs by 25 per cent by 2025.

Then the National Multi-sectoral Action Plan for Prevention and Control of common NCDs (2017-2022) provides a clear blueprint to tackle NCDs.

On the ground, implementation has been poor and the current pandemic has worsened the situation now and for the future. “In Haryana, there is a huge shortfall in targets of opportunistic screening for NCDs, a key strategy of the National Progra mme for Prevention and Control of Cancer that has been affected by the ongoing COVID-19 crisis,” says Rajib Dasgupta, chairperson, the Centre of Social Medicine and Community Health, Jawaharlal Nehru University, New Delhi.

The current situation has compromised primary healthcare and we need “catch-up rounds” of screening for both diagnosis and recognition of complications that may have ensued in the past six months.

“We also need focused analysis of long-term public health effects, including worsening cardiovascular disease outcomes, fewer cancer screenings and deteriorating mental health. All these can lead to greater excess mortality in the months and years ahead,” he adds.

One of the biggest weaknesses in dealing with chronic diseases is India’s failure to invest adequately on NCDs. As per a commentary in Nature Asia on May 14, 2019, though India has been the largest recipient of overseas development assistance for health, little of it has been spent on NCD prevention and control. As a result, NCD care slipped into the domain of the profit-driven private healthcare industry, it says.

There is also a paucity of estimates on the government spending on NCDs and injury (NCDI). Researchers Indrani Gupta and Avantika Ranjan with the Institute of Economic Growth, New Delhi, have analysed budget documents of the Centre, states and Union Territories for the expenditure on chronic diseases and injuries. They report in PLoS ONE in September 2019 that the total spending on NCDI by the government is less than 0.5 per cent of GDP.

Though NCDs contribute more than 50 per cent of the disease burden, spending on the diseases is a little more than one-fourth of the total healthcare budget. Recent trends in NCDI expenditure by the Union ministry of health and family welfare (MOHFW) show that the share of NCDI in total health spending has increased steadily over the past four years, from 14 to 20 per cent between 2012-13 and 2016-17.

“To combat any disease, including NCDs, it is not sufficient to be merely aware about it; every intervention would require matching funds, be it promotion, prevention or treatment,” says Gupta. Cost-effective and low-cost interventions are available, but scaling them up requires more funds. With such meagre public financing of the health sector, it is not surprising that not much has been achieved for NCDs, adds Gupta.

“NCDs are the rising public health challenge all across the diverse landscape of India where wide disparities in life expectancy, disease profiles and health system capacity account for variations in the speed and scale in health transition,” says K Srinath Reddy, president of the Public Health Foundation of India, a non-profit in based Delhi.

We need to strengthen our healthcare systems to respond to the full range of health challenges. In particular, both rural and urban primary healthcare systems must be invigorated with adequate investments in skilled and technologically enabled health workforce, infrastructure and medical supplies. This, he says, will help in prevention, early detection, timely care and rehabilitative services which can reduce disease burden.

This was first published in Down To Earth’s print edition (dated 1-15 November, 2020)