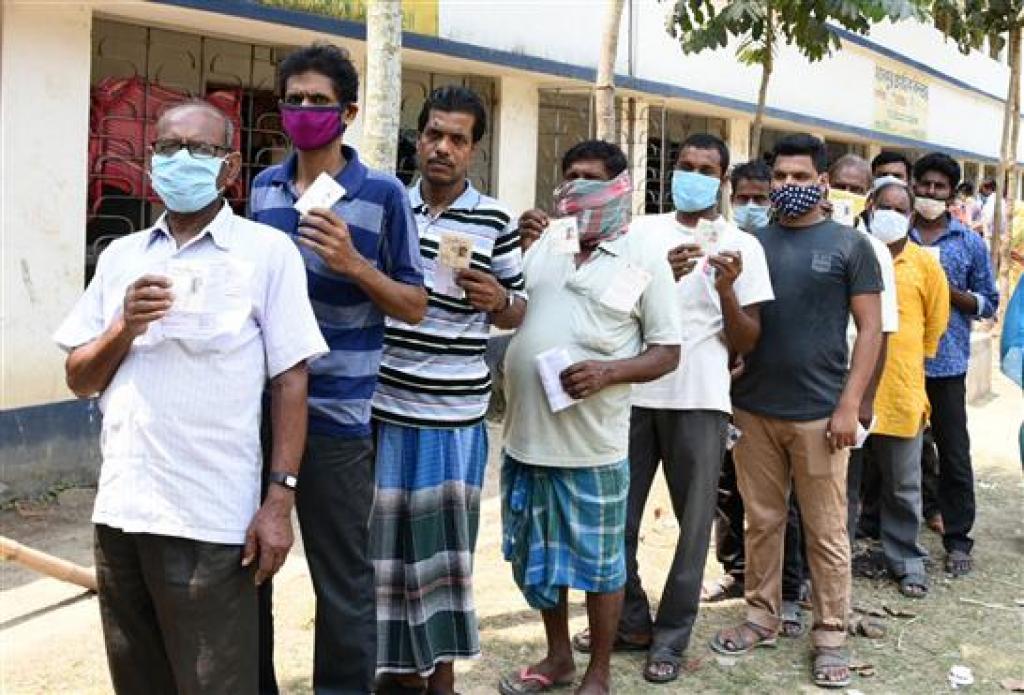 The eight-phase poll schedule — one of the longest assembly elections in India and implemented so that “the novel coronavirus disease (COVID-19) protocols could be maintained” — has ended up doing the opposite, claim public health experts. The poll schedule has led to an exponential rise in the number of cases.

The voting kicked off March 27 and will wind up April 29. The result will be announced May 2. While voting has terminated in 135 seats over four phases, it is left for anther 159 across four phases.

The state recorded 216 COVID-19 cases on February 26, when the poll schedule was announced by the Election Commission (EC) of India. The number shot up to 5,892, an increase of 27 times, within month-and-a-half.

A bench headed by chief justice of Calcutta High Court April 13 asked the state to ensure the compliance of norms laid down by EC in “the strictest possible manner”.

The EC convened an all-party meeting April 15 to discuss the issue.

While announcing the schedule, EC said the month-long voting was needed to maintain COVID-19 protocols. It also notified a 32 per cent increase in the number of booths. The commission, however, did not showcase any formal correspondence with any public health institution or expert in support of its decision.

“Such a schedule — that require so many meetings and road shows — maximises viral exposure. They should have been avoided,” Hiralal Konar from Joint Platform of Doctors told Down to Earth.

“We wrote to EC about three weeks ago saying that meetings and campaigns have been expediting COVID-19 spread, particularly because no political party is adhering to any COVID-19 norms. But the commission did not respond,” said Konar.

He pointed out that the movement of people, including paramilitary forces, star campaigners and their associates, has aided the spread of the contagion.

Manas Gumta of Association of Health Service Doctors wrote to the chief secretary of the state demanding “penal actions …for the people violating the norms to convey distinct message to all concerned, especially in the midst of election campaigns by the political parties”.

“There has been a total disconnect between health institutions and the EC. Did they consult any public health expert before finalising the poll schedule?” asked physician Kunal Sarkar.

Sarkar pointed out that emergence of a second wave had become imminent in February in Maharashtra, and that the commission should have made note of it for West Bengal.

Another disconcerting fact was the spread of the contagion from Kolkata and surrounding areas to the entire state during the period, said experts.

Court ordered compliance to norms; meetings flouting as a norm

The division bench comprising Chief Justice Thottathil B Radhakrishnan and Justice Arijit Banerjee April 13 ordered that “district magistrates of all districts in West Bengal shall ensure that all guidelines laid down by the Election Commission of India and the Chief Electoral Officer, West Bengal … are strictly implemented … if necessary, with the aid of the police authorities”.

The order, a copy of which is with DTE, added that “stringent measures must be taken against persons who fail, neglect or refuse to obey the COVID-19 protocols” and made wearing of masks mandatory at all gatherings.

It ordered liberal availability of sanitisers and obligatory maintenance of safe distancing.

The bench said all district magistrates and chief electoral officer would be “personally responsible for ensuring that the COVID-19 guidelines are scrupulously followed”. It directed the administration to resort to the provisions of Section 144 of the Criminal Procedure Code, 1973, “to avert a deadly disaster”.

The bench also ordered compliance to EC’s guideline dated February 26, which stated that “district election officer and district superintendent of police should ensure the number of attendees does not exceed the limit prescribed by State Disaster Management Authority for public gatherings”.

According to the Centre’s norms since September 2020, only 100 people can be allowed to congregate indoors as well as outdoors, a senior official in the state government said.

“It’s ridiculous. We find the prime minister and home minister regularly meeting thousands. The chief ministers and other leaders are doing the same,” the official added.

The next hearing is scheduled for April 19, when the chief electoral officer would be directed to file an affidavit regarding measures taken for implementation of guidelines.

The judicial verdict, however, seemed to have a little effect on ground on April 14, a day after the order was passed. Several large meetings were conducted and all COVID-19 norms were all tossed out of the window.

“Sonar pathor bati hoyna (gold and stone do not mix). Elections are all about people. You have to connect physically with them. Despite our best efforts, it is virtually impossible to maintain COVID-19 norms,” said a Trinamool Congress candidate who did not wish to be named.

“The EC has to take responsibility. It scheduled the polls,” stated Debasish Kumar, another TMC candidate.

A member of parliament from Bharatiya Janata Party, Subhas Sarkar, said: “It’s unfair to only blame the election schedule for the rise in COVID-19 cases, for the cases are increasing in states where there are no elections.”

“What’s the point of calling an all-party meeting now; the worst has already happened,” said another health expert.