Bariatric surgery to treat obesity is gaining ground. But the potential side-effects after the surgery are often overlooked 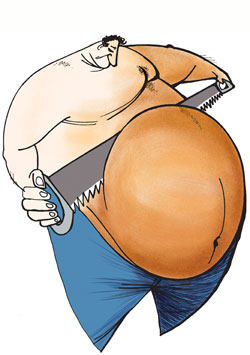 India is the third most obese country in the world after the US and China. As Indians try to deal with the associated health effects of obesityÐobstructive sleep apnea, Type-2 diabetes, and osteoarthritisÐa cure called bariatric surgery is gaining currency. The surgery restricts food intake and decreases absorption of food in stomach and intestines. Over 10,000 such surgeries were performed last year alone in India. The figure may rise up to 50,000 per year, says Arun Prasad, vice president, Obesity and Metabolic Surgery Society of India.

But new scientific evidence shows that the surgery itself is risky. About 40 per cent patients opting for bariatric surgery suffer from dumping syndromeÐa collective term for sweating, flushing, light-headedness, palpitations, desire to lie down, upper abdominal fullness, nausea, diarrhoea and crampingÐeven before they are discharged from hospitals. According to the American Society for Metabolic and Bariatric Surgery, the number of reported leaks in the stapled areas of the stomach varies between one and five per cent after surgery. Internal hernias, hair loss and gall stones are other complications that can also occur (see box: The day after).

Pregnant obese women with a prior bariatric surgery have an increased risk of intrauterine growth restriction, says a paper published in the Journal of Maternal-Fetal and Neonatal Medicine in July. On August 4, the journal Alcoholism Clinical and Experimental Research revealed that bariatric patients, who had undergone the gastric bypass procedure, are at an elevated risk for alcohol use after surgery. A study published in the Journal of the American Medical Association in 2012 suggests an increase in alcohol abuse (tendency to increase alcohol intake) after surgery, as it affects the release of hormone dopamine, a key player in drug abuse circuitry. The National Institutes of Health, USA, also supports this finding. Research also indicates that bariatric surgery patients might be “overrepresented” in substance abuse treatment facilities though they said that their findings were not conclusive.

At an international conference held in New Delhi in July this year, bariatric surgeons pointed out the absence of standardisation in the procedural techniques of surgery, which increases the risks of indecision and slip-ups by surgeons. In India, there are no published post-operative records of patients. Lack of such data conceals the true picture of the status of surgery patients. Moreover, surgeons often negate the guidelines for this surgery, says Deep Goel, weight loss surgeon, BLK Super Speciality Hospital, Delhi. The question as to who should decide on a qualifying patientÐa doctor, a government official, or a patientÐremains unanswered, says US-based Robert Rutledge, pioneer of mini gastric bypass surgery.

Two years ago, a weight-loss surgery could not save Keith Martin, a resident of London, who died from pneumonia following a lengthy battle with his 400 kg weight. The surgeon had operated upon him following the guidelines of the National Health Service (NHS), which allows patients with body mass index (BMI) between 35-40 kg/m2 or above and Type-2 diabetes, but the surgery proved to be ineffective. Rutledge says that people with a greater BMI of about 60-70 kg/m2 face more complications.

Weight loss reversal post-surgery is also common. Satish Kumar, consultant endocrinologist at Narayana Health City, Bengaluru, says patients, who underwent bariatric surgery three to five years ago, are putting on weight again as they were unable to follow nutritional guidelines associated with bariatric surgery. Doctors call it a consequence of unhealthy diet after surgery. Leading bariatric surgeons say while hunger is hormonal, desire to eat is emotional. Bariatric surgery has no control over the latter.

The problem is that there are few studies that document the long-term effects of weight loss surgery. The surgery does not guarantee that a patient will lose all of his or her excess weight or keep it off in the long run. Worse, sexual life of teens may also be disturbed post-surgery. K S Kular, surgeon at Kular Hospital, Ludhiana, says that fertility among female population increases after the surgery. Uncontrolled instances of sexual intercourse could intensify the possibility of unwanted pregnancy in teens. While many surgeons might disagree for an invasive procedure at a tender age, others agree. “This discrepancy has no justification, it’s a surgeon’s choice,” says Goel.

It is time to assess the safety of the surgery as these procedures are expensive. The cost of this surgery in India ranges between Rs 1 to Rs 5 lakh. Little protection from insurance for this surgery makes most people pay from their own pockets. In India, there is also a conflict on whether to view bariatric surgery as cosmetic or non-cosmetic. The Medical Council of India states that bariatric surgery is a gastrointestinal non-cosmetic surgery. However, insurance experts consider it as cosmetic surgery. “If you take a look at the bariatric surgery cases in India, almost 95 per cent are cosmetic in nature. So insurers refuse to accept a claim for such a surgery,” says Kapil Mehta, managing director, SecureNow Insurance Broker Pvt Ltd.

Moreover, bariatric surgery is not a ‘one and done deal’ as pre- and post-operative expenses are very high. Prior to the surgery, patients need to bear the expenses of consulting psychologists and nutritionists to help them prepare for the surgery.

Post-operative expenses include life-long expenditure on nutrient supplements and regular follow-ups with the doctor. Major outlays emerge in cases of body contouring and operations of hernia ulcers and gall stones that develop after the surgery. Weight loss reversal invites the expenses for a revision surgery with no benefits of compensation for the failure of the previous surgery.

About 50 per cent patients in India do not undergo this surgery due to high cost, says Prasad. However, doctors believe that complications due to obesity are more dangerous than that of post-surgery and thus it is an effective cure. Obesity offers both choicesÐsurgery or no surgeryÐand none is ideal. The choice of prevention or cure is ours.