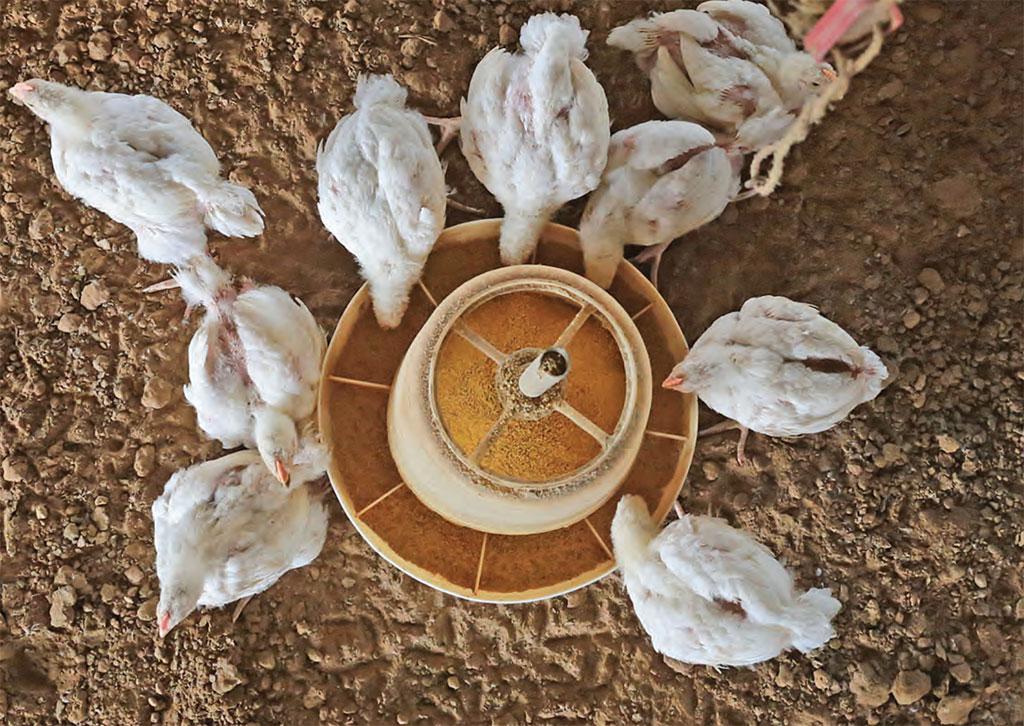 Divansh Parul’s mill in Mohali, Punjab, produces nearly 10 tonnes of poultry feed every day. He adds a sack of supplement containing antibiotics to the feed as routine practice. The product is bought by customers like Irshad Ali, who owns a poultry farm in Bulandshahr district of Uttar Pradesh, but is not aware about the presence of antibiotics in it. “I give it to all the birds in all seasons for growth, especially during their first 14-15 days,” says Ali.

But studies have linked the use of antibiotics in poultry feed to development of antimicrobial resistance (AMR) in humans through contact with animals, consumption of meat or environmental exposure to soil and water contaminated by animal excreta, and has become a looming public health threat. However, those who sell poultry feed laced with antibiotics in open market or online are not breaking laws because there virtually aren’t any.

“We don’t need licenses for feeds as there is no regulatory authority,” says a senior representative of the Compound Livestock Feed Manufacturers Association of India, requesting anonymity.

Poultry feed is a thriving business in India, with 63.8 per cent of the feed manufactured in the country catering to poultry, followed by dairy (29.6 per cent) and aquaculture (5.8 per cent), as per the global feed survey of 2019 conducted by Alltech — a private multinational company headquartered in the US. The survey says there are around 1,400 feed mills in India.

All the companies accepted that their feeds contain antibiotics or medicines. Animal husbandry officials and academicians in six important poultry-producing states of India — Andhra Pradesh, Haryana, Karnataka, Punjab, Tamil Nadu and Uttar Pradesh — also confirmed that a variety of antibiotics, such as ciprofloxacin, levofloxacin, erythromycin, nalidixic acid, neomycin, kanamycin, avilamycin, apramycin and flavomycin, are administered to poultry through feed for growth promotion, in response to a questionnaire by CSE.

Ciprofloxacin and levofloxacin belong to the class of fluoroquinolones used to treat tuberculosis in humans.

CSE research found that feed supplements laced with antibiotics are also available in the market. Many of these, such as erythromycin, ciprofloxacin, furazolidone and doxycyclines, are important in clinical practice for treating humans.

There are also antibiotics such as tylosin and enrofloxacin which are not used directly in humans, but the antibiotic classes they belong to — macrolide and fluoroquinolones — are important for humans and can cause cross-resistance.

These classes are also categorised as highest priority critically important antimicrobials (HPCIAs), as per the World Health Organization (WHO), and are also being used by companies.

“Tylosin is the same class of antibiotics as azithromycin and clarithromycin that are particularly important for patients with severe infections like pneumonia and typhoid,” says Sumit Ray, chief of the department of critical care and ICU at Artemis Hospital, Gurugram. 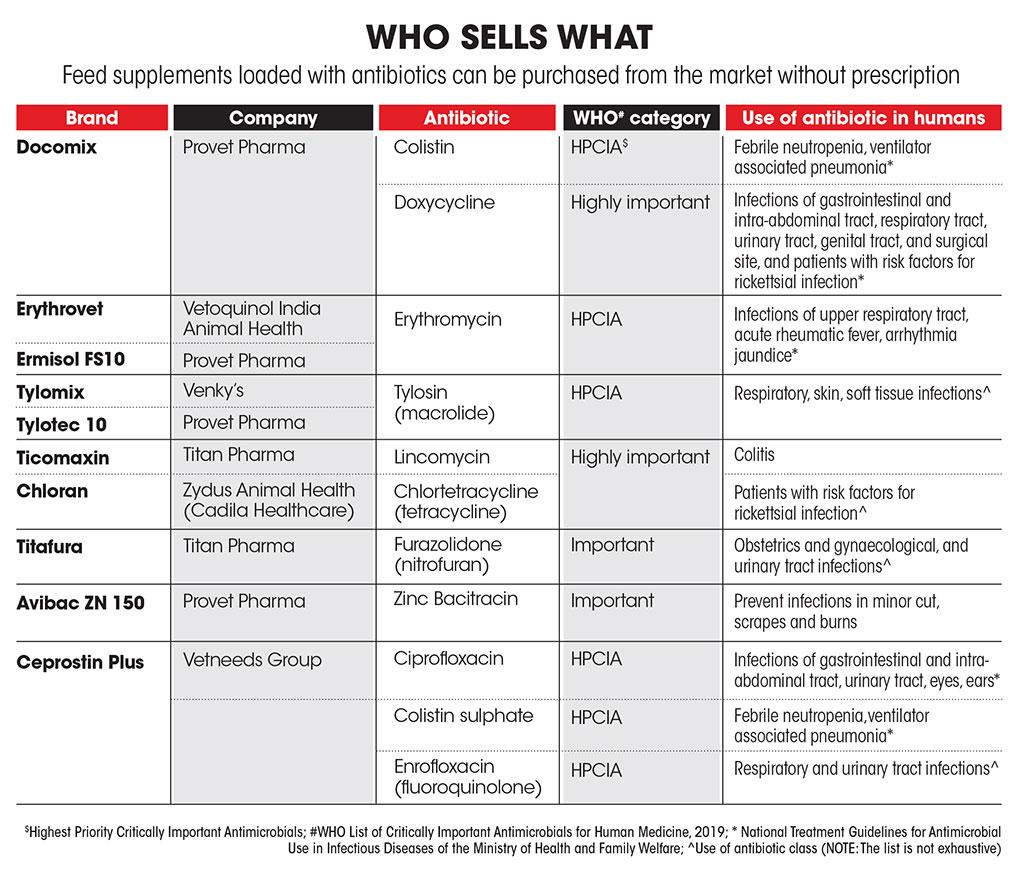 Antibiotics are under the purview of the Central Drugs Standard and Control Organization (CDSCO) under the Ministry of Health and Family Welfare (MoHFW). In the Drugs and Cosmetics (D&C) Act, 1940, antibiotics are typically placed under Schedule H which makes it mandatory that they be sold only under prescription.

However, when antibiotics are added to feed, the resultant product no longer remains under the purview of CDSCO or any other authority.

“Feeds containing antibiotics are like borderline products. They contain drugs and antibiotics which are not claimed to be intended for treatment. There is no clarity on the definition or provisions for such products,” a senior CDSCO official told CSE, requesting anonymity.

Due to this loophole, state drug authorities have to resort to judicial routes to address the misuse of antibiotics. “We have filed and lost cases on feed supplements containing antibiotics,” a Karnataka drug control official told CSE.

Though there are no regulations, there are advisories and guidelines. The Bureau of Indian Standards (BIS) provides norms for various animal feeds, such as cattle, fish and poultry. The poultry feed specifications (IS 1374) of 2007 mention that use of antibiotic growth promoters with systemic action are not recommended.

But these are all advisories and mostly ignored. BIS is now considering to ban use of all medically important antibiotics in feed as additive. The Food Safety Standards Authority of India is also considering regulation of feed, but it pertains to only cattle feed.

MoHFW banned use of colistin and its formulations in food-producing animals and animal feed supplements in July 2019. But this addresses the issue of antibiotic misuse in food animal sector only partially.

To contain AMR, in line with how other countries are dealing with it, antibiotics should not be allowed in feed. We should begin with phasing out all antibiotics medically important for humans. CDSCO should amend the D&C Act to ensure that antibiotics are not available without prescription for any use in human and veterinary sector.

Additionally, the D&C Act should be modified to give necessary powers to drug officials so that antibiotic misuse in feeds can be regulated. This will also help CDSCO regulate the import of antibiotic-laden feed supplements, which otherwise is not under its purview. CDSCO should also regulate the addition of loose antibiotics to feed separately.

BIS should make the poultry feed specifications mandatory and develop necessary standards for other sectors. To complement the above, MoHFW should consider banning all medically important antibiotics for humans from use in feed or feed supplements.

It should also ensure that colistinladen feed supplements are not marketed or sold, as CSE found during its research despite ban. To support these measures, DAHD should encourage farmers to adopt better farming practices.

With inputs from Amit Khurana