Don't quit at Quito: Follow the health pulse of the New Urban Agenda

The new report, 'Health as the pulse of new urban agenda', released by the WHO in Quito, has outlined the guiding health principles that should shape cities 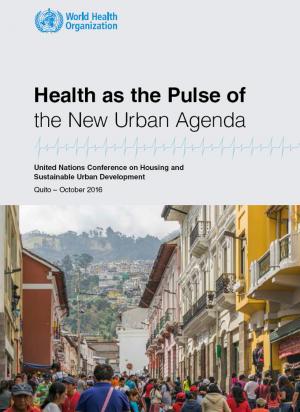 This time, the World Health Organization (WHO) proactively intervened to ensure that the New Urban Agenda was adopted by 193 countries during the ongoing Third United Nations Conference on Housing and Sustainable Development, Habitat III Summit, in Quito this week.  The new report—“Health as the pulse of new urban agenda”, released by the WHO in Quito, has outlined the guiding health principles that should shape cities. It asks governments—“how can policies and decisions at the city level expand opportunity for and protect the health of the 54 per cent of humanity now living in cities?”

The new report underscores the importance of using health as the measure of progress of the New Urban Agenda for the next 20 years. Carlos Dora of the WHO, who has led this consultation process, points out how the intervention of the global health community has helped. The earlier draft of the New Urban Agenda had barely mentioned health. But now the final draft is comparatively more explicit on the health connection. But the challenge remains in getting all sectors and stakeholders to understand the health linkages of non-health sector interventions. Successful implementation of the new urban agenda will “hinge on a clear understanding of how health can act as a driver of inclusive, sustainable development,” states the report.

The WHO asks governments to go beyond health care to also mitigate the effect of urban development on public health. Among all aspects of urban agenda under the scanner—waste, water, sanitation, buildings, good food. Air pollution mitigation also gets the priority focus.

The coming decade will see increasing numbers of people at risk as increasingly large number of people will live near pollution sources in cities. Already, more than 80 per cent of the global urban population is breathing air that does not meet WHO guidelines. It is the urban policies that lead to increased air pollution, and cause premature deaths from stroke, heart attacks, and cancers. For instance, cardiovascular disease and cancer are now the two leading causes of deaths in India’s urban areas that are aggravated by air pollution. A great part of the solution will have to come from the way we design and develop our cities.

Only health indicators can help city governments to know how people can benefit, if urban infrastructure is designed to reduce health risk.  This connection is still not clear to many—how lack of access to public transport and safe spaces for walking and cycling lead to more car use and sedentary behaviour and therefore increase exposure to air pollution and traffic injuries. This adds enormously to the health burden.

Therefore, cities need health promoting urban policies that will not allow sprawl but will promote compact, high density and high quality urban design to improve mobility, walkability and therefore health and wellbeing. The report states that efficient public transport and a cycling network lower the risk from air pollution, reduce traffic deaths, and promote more physical activities while improving access to education and jobs. High quality and well-connected transport systems can lower burden of non-communicable diseases by reducing air pollution—much less than that caused by private cars. Those who walk and cycle more have less underlying diseases and suffer less premature deaths.

The report moots the idea of "Right to the city" that requires access to spaces that support healthy lifestyle, promotes social cohesion and equity while providing economic benefits. Including vulnerable and poor is critical to this strategy. Land use planning has to promote social connectedness and facilitate healthy activities. The WHO has made an explicit link with equitable access to parks and green spaces for mental and physical health and health equity.

According to the WHO, mental ill health is the single largest cause of long term medical care, and a major driver of health care and other social costs. “Landscape design and management solutions that expand access to parks, gardens, bodies of water, forests and other green areas are needed to protect both physical and mental health,” it says. This conforms with the sustainable development goal of 2030 that has asked for “universal access to safe, inclusive, and accessible, green and public spaces, in particular for women and children, older persons, and persons with disabilities.”  Well-designed cities can help all including the vulnerable to spend less time commuting in their vehicles, and be more productive, creative and socially engaged.

The report is straight forward in its recommendation—“The local planners need to frame parking and urban core to reduce vehicle miles travelled. This will reduce pollution and also sedentary time for commuters.”

Make health the pulse of urban planning and policies

The global health and air quality community has thus underscored the importance of adopting a people centred “right to health” framework. Cities need health-based targets like meeting the air quality standards or meeting the indoor air quality guidelines of the WHO; and also health impact assessment tools to de-risk urban infrastructure and services. This gives people the right to use urban public spaces that promote health and not the health risks.

There are now emerging global evidences of local and neighbourhood level policies in cities that are adopting health mainstreaming for local area planning and implementation. In Bristol in England, communities are practising the use of “health lens” in neighbourhood planning. Public health officers and local municipalities work together to develop several tools to support local communities in using of health lens “to identify local physical elements that either detract from health or promote health in the areas where they live.” Thus, lived experience is being brought into planning.

There are other instances as well. In the city of Kirikkale in Turkey, healthy public spaces are being created to “increase happiness, reduce stress, and enhance resilience of communities.” This is combined with better quality and high density housing.  Similarly, the city of Ljubljana in Slovenia is implementing fully accessible public transport, public buildings and public toilet facilities along with a city centre tactile map and other facilities to reduce risk for those with disability and elderly. Nashville in Tennessee has adopted a health based scoring criteria to guide selection of transportation projects for funding. This has helped to increase the number of projects for cyclists and walkers.

The new report is also scathing in its criticism of the national and city policies that so far have encouraged adoption of dirty technologies that add to the pollution woes. It has criticised policies that encourage diesel vehicles to reduce carbon dioxide emissions which is a global warming gas. The report states categorically that “that they should know that diesel engines are a major source of dangerous particulate pollution, including black carbon that is a strong warming agent.” It adds that such single-minded pursuit of green house gas reduction has compromised the health of many urban residents, while exacerbating near-term climate change. “Cities should consider restricting the use of diesel engines for both private passenger and commercial vehicles in dense urban centres. “Diesel exhaust is a carcinogen and emits more small particles—the vehicle pollutant most significantly associated with stroke, heart and respiratory diseases and deaths”.

It remains to be seen how the New Urban Agenda will resonate in India. Is our government prepared to attach primacy to health as the defining factor for urban development that also reaps economic benefits? India is at the throes of an epidemic of non-communicable diseases of heart, stroke and cancer that imposes enormous costs on society. Heart ailments are responsible for half of the disease burden caused by air pollution in India. Moreover, much older estimates of National Cancer Control Programme (NCCP) show that over 700,000 new cases and 300,000 people are set to die every year in India. By 2026, more than 1.4 million people will be falling in the grip of the disease. These numbers have increased now. NCCP lists greater exposure to environmental carcinogens as an important reason.

It is encouraging that the new WHO report has also recognised and showcased the recent initiative of India’s Union Ministry of Health and Family Welfare that has adopted the recommendations of its steering committee to develop a health-centred strategy for air pollution control. The WHO has acknowledged that India’s health ministry has proposed a new integrated framework for managing air pollution that prioritises tracking people’s actual exposure to dangerous pollutants and has asked for cross sector coordination across government agencies to sources of air pollution. This includes urban development.

This now demands clear process and mechanism to make it work and especially in informing the urban renewal process. Several national policies as well as Master Plans in cities such as Delhi have taken on board the principles of urban planning and design, and, land-use and transport integration that asks for retaining and reshaping of compact and high density development in cities, inclusive spaces to integrate poor and vulnerable, equitable access to open green spaces, improved accessibility to reduce motorised trips and pollution, active transportation for healthier life and well-being among others.

These principles and norms now need a roadmap and timeline for urgent roll out and implementation. This has to gather momentum. If there is inertia in the system then only public health concerns can be the accelerator of change and scale. A health-centred approach to urban planning and development can build strong policy and public support for such initiatives. There is no other option to reduce the scary health burden.

Clearly, health and well-being will have to be the driver of change to shape healthy cities of the 21st century.