The number of fluorosis cases in Sonbhadra district, Uttar Pradesh, is overwhelming. Despite having full knowledge of the causes, the state government is in comatose 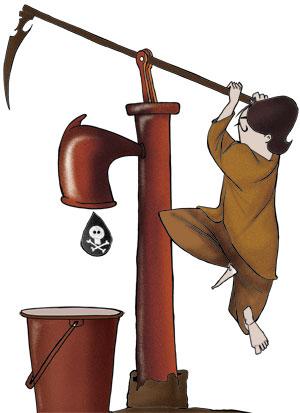 On a recent visit to Sonbhadra in Uttar Pradesh, we were stunned by the number of people suffering from various diseases. Almost every child we met was afflicted by dental fluorosis—a chronic condition caused due to consumption of water contaminated by fluorine compounds. It causes typical black/brown spots on teeth, gastro-intestinal discomfort, pain in the muscles, thickening of bone density and calcification of ligaments, which may cripple a patient. Most adults had gastro-intestinal problems and pain in their body. We could see innumerable people walking with the aid of a stick.

It is no surprise then that 250 villages in the district have excess fluoride in groundwater, out of which 150 have levels beyond the permissible limit. The Central Pollution Control Board (CPCB) in 2013 categorised the district as “critically polluted”. Most of the patients are poor—the district is home to as many as 16 scheduled tribes—and cannot afford treatment. Some affluent patients have spent up to I7 lakh at private hospitals, even though there is no treatment of skeletal fluorosis and prevention is the only answer. Out of helplessness, many are depending on ojhas—exorcists/spirit healers. Rajeev Ranjan, a doctor practising at a primary healthcare centre in the district, says due to poor nutrition, the impact of fluorosis is more severe.

What is perplexing is that the government and the health machinery have been sitting on the problem, despite knowing the perpetuators. The region has been undergoing rapid industrialisation for many decades. Hundreds of aluminium, chemical, mining and cement factories have sprung up altering not only the region’s landscape, but also causing irreparable damage to the geo-hydrology and ecological balance. Indiscriminate dumping of waste by these industries has further polluted not only surface waterbodies, but also groundwater.

The region is also known as the “energy capital” of India as several dams have been built on its rivers. Coal ash from thermal power plants is another source of fluoride. Fluorine is the most electronegative of all known elements and is known to exist in the form of fluoride compounds in geological rocks, from where it leaches into groundwater. The process of building these dams has exacerbated the problem.

The source of water for most residents is either the river water or groundwater, both of which are polluted with excess fluoride. Jagat Narayan Vishwakarma, who petitioned the National Green Tribunal (NGT) on the issue, says: “Agreed, groundwater has fluoride, but if the same is found in rivers, streams and ponds then it undoubtedly is coming from the industries.” In 2014, the NGT constituted a core committee to monitor the potential hazards of industrial development. It also constituted five sub-committees to quantify the industrial impact and to assess the impact of pollution on water resources, land resources, air quality and health.

The report of the committee says over 35 million tonnes of fly ash is generated annually by the 10 thermal power plants located in the region. Fly ash contains fluoride and it can also leach into groundwater as well as contaminate surface water. During our visit, we found that the ash pond of the Obra Thermal Power Plant was overflowing and contaminating the river Renu, a tributary of river Son, and nearby agricultural fields.

The NGT report also says that over 2,250 tonnes of spent pot lining (SPL) is generated every year by the aluminium industry in the region. SPL, an extremely hazardous waste product, contains fluoride and has to be disposed of in a secured landfill. But due to poor monitoring SPL has been found to leach from the landfills into the nearby water sources. “Hindalco Aluminium should immediately install an online fluoride monitoring analyzer in the discharge from the industry and the control should be with the CPCB/SPCB,” says the report, suggesting there are reasons to implicate the aluminium industry for fluoride contamination in the area.

Nearly all villages we visited did not have a functional Village Level Water and Sanitation Committee, which is required to be set up as part of the National Rural Health Mission to educate residents about health and nutrition. In 2008-2009, the Government of India initiated the National Programme for Prevention and Control of Fluorosis, but Sonbhadra was not covered initially. It was covered only in 2015-16, but implementation is yet to begin. Though several CSR programmes are functioning in some areas, we found that the deflouridation plants were not working.

Though there are several and multiple regulatory authorities, both at the Central and state levels, their work is yet to make any impact on the lives of the fluorosis-affected people of Sonbhadra. Clearly, the pollution control board and groundwater authorities have failed in their duties, and even the Gram Sabhas have done little to address the issue. Meanwhile, the hapless victims of Sonbhadra suffer silently.

The authors work with the Public Health and Environment Justice Initiative at the Vidhi Centre for Legal Policy, a Delhi-based non-profit