Availability of junk food is changing children's diet in India

Packaged food is fast replacing balanced diet among schoolchildren, especially in urban India, warns the latest study by Centre for Science and Environment 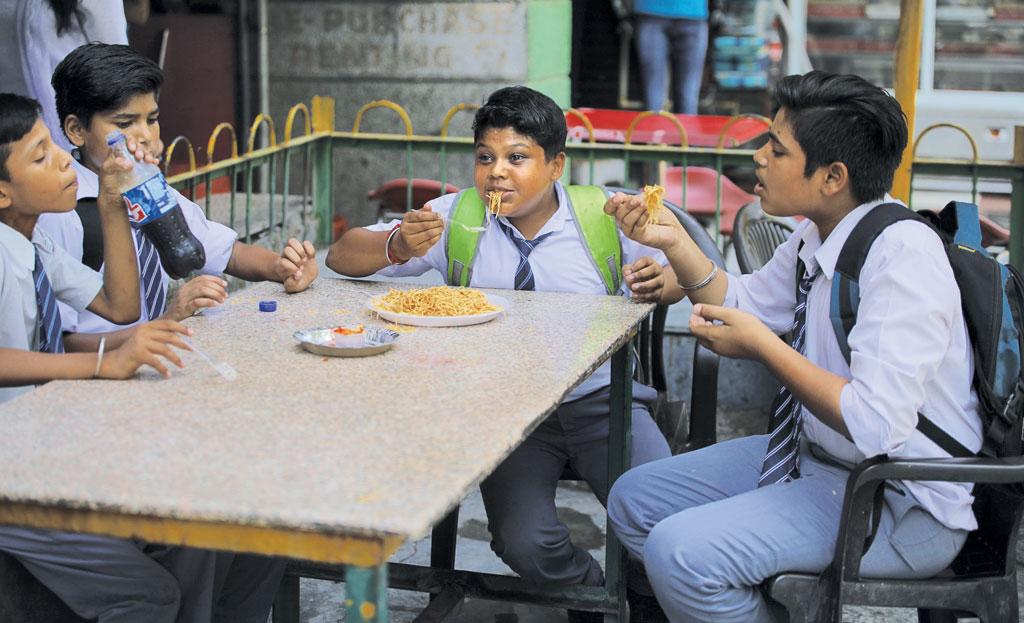 Despite the Delhi High Court order, the Food Safety and Standards Authority of India is yet to enforce guidelines restricting the availability of junk food in and around schools (Photo: Vikas Choudhary)

Our schoolchildren are increasingly becoming overweight or obese. In the absence of a consolidated study, certain sporadic surveys conducted in different parts of India over the past decade suggest that 2.9-14.3 per cent children in the country could be obese and 1.5-24 per cent overweight. The problem has particularly assumed a public health concern in urban areas. A 2011 study by Jehangir Hospital in Pune and UCL Institute of Child Health, London, shows that 30 per cent of children living in urban areas are obese or overweight. In a 2017 study published in the Indian Journal of Public Health health experts in Gujarat say 33 per cent of children studying in affluent schools of Rajkot are obese or overweight.

Childhood obesity is a matter of serious concern because children who are overweight or obese grow up to be overweight or obese adults, says Aanuja Agarwala, dietician at the All India Institute of Medical Sciences in Delhi. Besides, child-hood obesity is also a forerunner of metabolic syndrome, poor physical health, respiratory problems and non-communi cable diseases (NCDs) like hypertension and glucose intolerance (type-II diabetes). NCDs typically occur later in life. Till three decades ago, they were not a paeditrician’s concern. But they are now beginning to appear among children, says Rekha Harish, head of paediatrics department, Govern ment Medical College, Jammu.

What could be the reason for this recent surge in obesity and NCDs among children? Experts like Seema Gulati, chief project officer (nutrition) at the Diabetes Founda tion of India, say excessive consumption of food high in salt, sugar and fat is the main culprit for obesity and NCDs among children. Does this mean our children have stopped eating right? Has their lifestyle undergone a sea-change in recent decades? To understand this, the Centre for Science and Environment, Delhi-based research and advocacy organisation, recently conducted an online survey, Know Your Diet (knowyourdiet.org). Over 13,200 children in the age group of 9-17 from 300 schools across the country participated in the survey and provided information related to their daily habits. About 90 per cent of them were from urban areas.

Worse, older children are more likely to consume packaged food. As per the report, 59 per cent of the children between 14 and 17 years consumed packaged food or beverages at least once a day. The share drops to 51 per cent and 35 per cent in children in the age groups 11-13 years and 9-10 years respectively. “I could monitor my son’s diet till he was 12 years old. But now, his intake of chocolates and colas has increased,” says Nandita Lakshmanan, mother of a 15- year-old. “He now drinks 1.5 litres of colas every week,” adds Lakshmanan, a public relations consultant in Bengaluru. 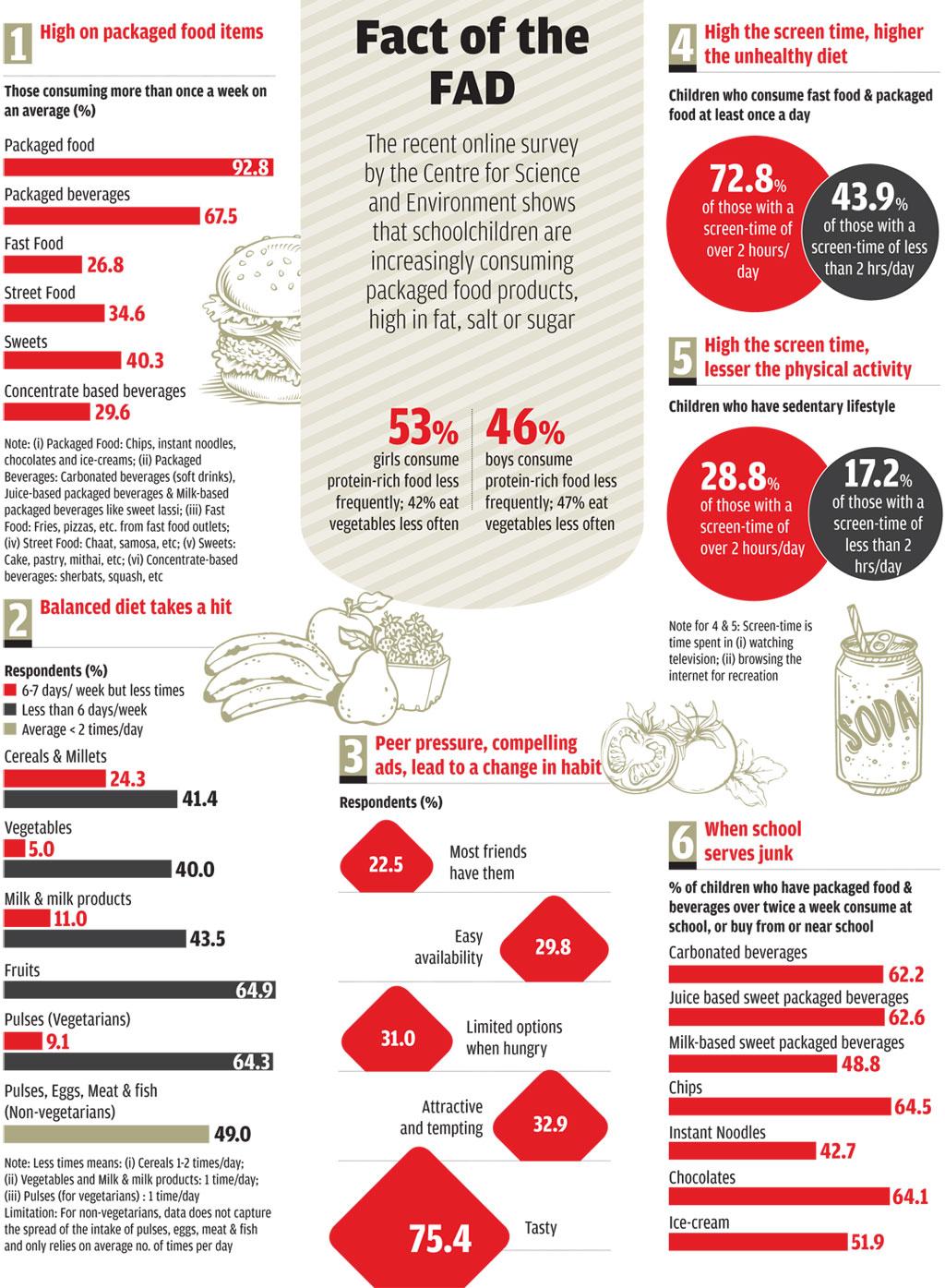 The survey also exposes high depen dence of children on packaged break-fast cereals and milk-food drinks. Some 83 per cent of schoolchildren consume milk with milk-food drinks, such as Bournvita, Complan and Horlicks, while 69 per cent consume cornflakes or strawberry flakes. Breakfast cereals are processed and packaged foods which contain chemical food additives which can be harmful to health. Hence, these packaged cereals should not be preferred over freshly made options like idli and poha. On the other hand, milk-food drinks contain very high amounts of sugar. For example, a serving of Bournvita (20 grams) contains 14.2 g of sugar. This is sufficient to exhaust over half of one’s daily upper limit of added sugar as recommended by the World Health Organization. “High consumption of sugar is also bad for the teeth. Bacteria in the mouth convert sugar into acid which demineralises the enamel and leads to tooth decay,” says Sangeeta Saikia, who heads the dental department at Guru Gobind Singh Hospital, Delhi.

According to the CSE survey, the consumption of non-packaged HFSS food is low when compared with packaged HFSS products. 35 per cent children consume street foods like samosa more than once a week. This is also the rate at which 40 per cent consume sweets, such as mithai and cake; and 30 per cent consume concentrate-based beverages like sherbat and syrup.

A wholesome and balanced diet comprising minimally processed food is desirable for good health, says H P S Sachdev, paediatrician at Sitaram Bhartia Institute of Science and Research, Delhi. However, CSE survey shows that the frequency at which children in urban India are eating nutritious food is far from ideal.

What dictates their choice

The survey also delves into the reasons responsible for the eating habits of schoolchildren. Even though 91 per cent children carry lunch from home, 40 per cent carry packaged food to school almost daily. “Junk food is popular among children because it is tasty, convenient and easily available. The convenience factor is so crucial that sometimes parents request us to allow children to carry packaged food from home,” says Anu Bhatia, vice principal, St Edmund’s School, Jaipur. The school has recently restricted the availability of most unhealthy food items in the school.

Advertisements are an important trigger. “Children make for a highly impressionable audience and marketers use it to lure them towards unhealthy food,” says Harish Bijoor, an expert in brand and business strategy. These campaigns create the perception among children that packaged HFSS food is tasty and tempting. In reality, they are high in fat, salt or sugar and ultra processed. 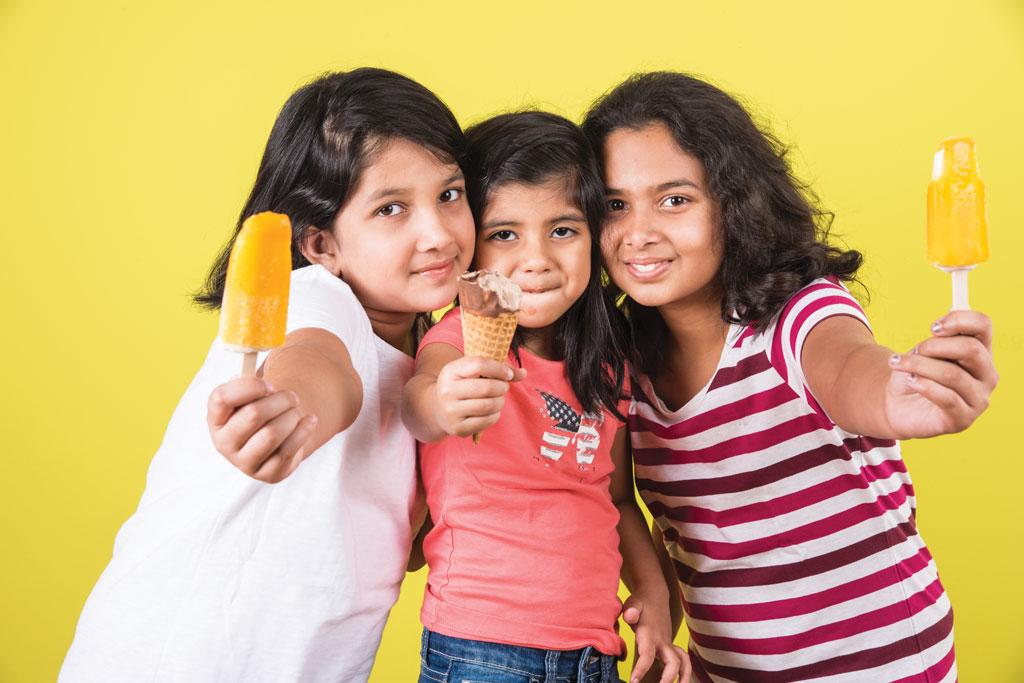 The worse factor is schools are playing a major role in making HFSS food available to children. In February 2015, while hearing a case by Uday Foundation for Congenital Defects and Rare Blood Groups, the Delhi High Court had directed the Food Safety and Standards Authority of India (FSSAI) to enforce its guidelines to restrict the availability of HFSS food in schools and nearby areas. It has been two years but the guidelines are still in the draft stage. They restrict the availability of common HFSS food items, such as chips, sugar-sweetened beverages and instant noodles, within schools and in 50 metres around it. The guidelines also suggest that a canteen policy should be implemented based on colour coding. Green category (healthy) foods should constitute 80 per cent of the food items available in the canteen; red category (common HFSS foods) should not be made available in schools; and yellow category (foods that should be eaten sparingly) could be made available in small portions and less frequently. After the order, states like Punjab, Nagaland and Maharashtra banned junk food in schools. But the CSE survey shows that the reality is grim. A large percentage of children, who consume packaged food more than twice a week, eat it at schools or buy the product from school canteens or stores located in the vicinity. CSE researchers say it is high time FSSAI enforced these guidelines.

There is also a need for restrictions on endorsement of HFSS packaged food by celebrities. Even though the Food Safety and Standards Act, 2006 has provisions to prohibit advertisements that are misleading, it does not monitor the ads directly. Food advertisements are largely self-regulated through the Advertising Standa rds Council of India which is an industry association but does not have any punitive power of its own.

Given the rising burden of obesity and NCDs, endorsement of HFSS food by prominent sports icons, actors and TV personalities must not be allowed in the country. There should also be strict regula tions on the broadcast timings of adverti sements, particularly those promoting HFSS products, that target children. Such regulations are already being followed in other countries. Brazil, for instance, prohibits any form of marketing commu nications intended to persuade children and adolescents to consume a product or service using strategies, such as celebrities, comics or animations. In Ireland, celebr ities, characters and personalities from children’s programmes cannot be used to advertise food products targeting children. Norway prohibits the marketing of food and beverages directed at children under 18 and advertising in connection with children’s programmes on TV, radio and teletext. In South Korea, TV advertising for specific food categories is restricted to children under 18 before, during and after programmes shown between 5 pm and 7 pm and during children’s programmes.

While India needs to learn how to regulate food advertisements, it also needs to strengthen its nutrition labelling laws. There should be laws mandating labelling of salt, added sugar, saturated fat and trans-fats. Per serve nutrient information should be mentioned along with percentage contribution to the recommended daily allowance (RDA). An easy-to-understand front-of-pack labelling system to display the most important information like energy, salt, sugar and fat and percentage contribution to RDA should be developed (see ‘Claims we buy’, Down To Earth, 16-31 January, 2017).

Above all, parental guidance and intervention can refrain children from being lured towards HFSS foods. Angad Datta, 12-year-old student in Gurugram, says he loves pizzas, burgers, chips and chocolates. “Since junk food is not available in my school and my parents are very strict about my diet, I eat it only occasionally,” says Angad whose journalist parents ensure that he is also involved in cooking to understand healthy eating behaviour.

This story was first published in the August 1-15, 2017 issue of Down To Earth magazine under the headline "Spoilt for choice".