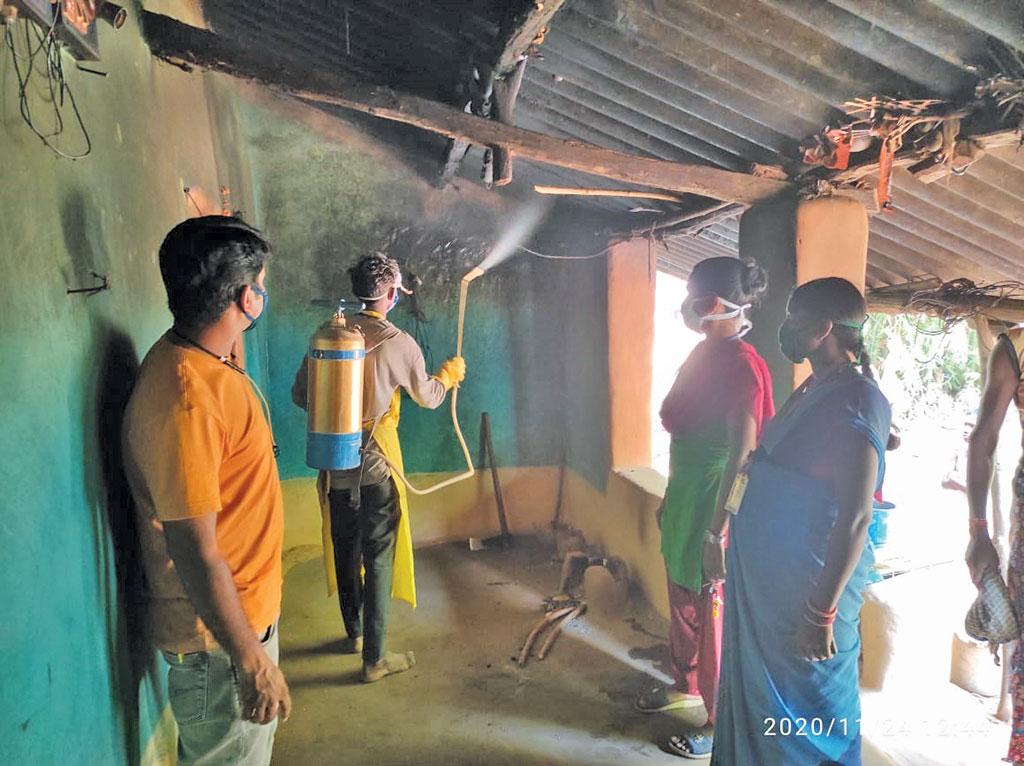 One of the activities to control malaria was extensive DDT spraying (Photograph: Priya Ranjan Sahu)

At 8 pm every day when people in Dogiguda prepare to go to bed, it’s time for accredited social health activist (ASHA) Seema Haldar to take a round of the village in Odisha’s Malkangiri district. She moves from one house to another hitting a gong with a stick making a loud metallic sound. The sound is a reminder for residents to put up their mosquito nets before going to bed.

Haldar has been doing this for the past several months. “I am happy my efforts are showing results. Earlier, there used to be around five malaria cases every month in the village. Now there is none as people are using the mosquito nets,” she says.

Amid the gloom of the novel coronavirus disease (COVID-19) pandemic, Malkangiri — counted among India’s worst malaria-affected districts— is on a trajectory to be malaria-free. The district has been witnessing a gradual reduction in cases over the last four years.

But since July this year, the number of cases began to drastically go down — there was a 63.18 per cent decline between July and October, as compared to the same period in the previous year. According to the district administration, there will be “zero” malaria cases in the district by December.

“The malaria control achievement has happened due to proper planning at the top and effective implementation at the ground levels with the convergence of several departments,” says Sandhyarani Hota, Malkangiri district’s chief medical officer.

Malkangiri is one of the most backward districts in the country. According to the 2011 Census, it has a population of over 0.61 million, of which 57.8 per cent people belong to tribal communities.

Over 61 per cent of the population lives below the poverty line. The district’s Infant Mortality Rate (IMR) of 50 per 1,000 is higher than Odisha’s 41 and India’s 32. Many experts cite malaria as one of the contributors to high IMR, along with malnutrition.

For a long time, the district was a malaria hotspot, contributing to over 40 per cent of Odisha’s cases. Health officials say that’s because Malkangiri is home to several ecological conditions that enable mosquitoes to breed — hilly areas, stagnated water, high humid temperature and an annual rainfall of 1,700 mm.

According to the National Vector Borne Disease Control Programme, at least 18,687 malaria cases were recorded in Malkangiri in 2014, which increased to 29,610 cases in 2015. In 2016, over 27,000 cases were recorded in the district. District health officials, in fact, admit that the actual figures could have been much higher.

As per public health estimates, 10 per cent of the population is usually found to be fever cases. In that case, in Malkangiri, around 67,000 persons should be screened for malaria rapid diagnostic test (RDT) considering its population.

“But we have been testing 160,000 people every year on an average,” says a health department official. Anganwadi (child day care centre) and ASHA workers were engaged in surveillance and distributing medicines and medicated mosquito nets called LLINs (long-lasting insecticidal nets) to the people. These initiatives started showing results.

But there was a hiccup. The administration was alarmed when there was a sudden spike in cases in the first three months of 2020 —3,589 cases as against 1,582 in 2019. Door-to-door surveys revealed that just 34 per cent people were using LLINs. “Many people used the LLINs, instead, to catch fish in the swampy agricultural fields or nearby streams,” says Ashalata Biswas, an anganwadi worker.

The district administration then changed the strategy and launched “Zero Malaria”, where several departments including health and family welfare, women and child development, revenue, forest and agriculture were involved to make the campaign more effective.

ASHA and anganwadi workers, teachers and foresters were engaged in door-to-door surveys to check if people were using LLINs and destroying mosquito breeding grounds. Biswas says the strategy worked in dual ways — controlling malaria as well as combating COVID-19. “We convinced people about the benefits of using LLINs and they cooperated,” she says.

Due to these efforts, the use of LLINs went up to 84 per cent by June and this led to a drastic drop in malaria cases. Officials say that now almost all people in inaccessible areas use mosquito nets. Regular meetings organised by Gaon Kalyan Samitis (village welfare committees) alerts to put up nets, DDT spraying, extensive RDT and bush cutting have become the new normal.

Nila Khila, a resident of Batriatala village, says due to the anti-malaria drive, her village has become malaria-free; no cases were reported in the past few months. Khila says it is important that these activities and surveillance continue so that Malkangiri becomes a model for the rest of the country in transforming highly-endemic malaria districts to “Zero Malaria”.