The business of malnutrition 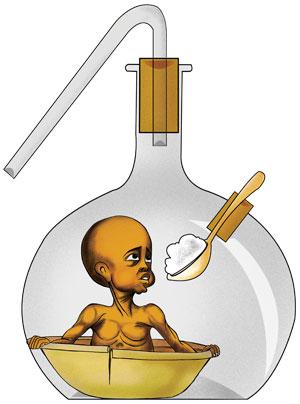 A curious case has emerged in Karnataka. Well-known companies, including Biocon, Jindal Steel and Scania, are supplying spirulina granules to undernourished and malnourished children enrolled in anganwadis (child daycare centres) under the Integrated Child Development Services (ICDS), in direct contravention of a 2004 Supreme Court order which said, “Contractors shall not be used for supply of nutrition in Anganwadis.”

Worse, no government agency has approved the use of spirulina either as a drug or as a nutrition supplement. On the contrary, there is evidence to show that it is not safe. Over 15 years ago, a study by the National Institute of Nutrition, Hyderabad, on preschool children fed spirulina for vitamin A deficiency was abandoned mid-way because the levels of beta carotene (precursor to vitamin A) in children fed spirulina dropped to less than 40 per cent during the trial period.

Spirulina is an algae that grows on lakes and ponds. If the water contains heavy metals such as mercury or lead, the spirulina algae absorb the metals. When harvested and dried as a supplement, the metals continue to remain inside the supplement. Studies reveal that improperly processed spirulina contain significant amounts of cyanotoxins, which can accumulate in the body over a period of time. One study reported the presence of lead up to 5.1 parts per million in a sample from a commercial supplement. It is important to remember that for children there are no safe limits for toxins and heavy metals in food, and, it is unethical to give such foods to children.

The World Health Organization says cyanotoxins and heavy metal toxicity can cause irreversible nerve, bone and tissue damage. The Chinese State Food and Drug Administration reported that lead, mercury, and arsenic contamination is widespread in spirulina supplements, and recalled all spirulina products in 2012.

Pre-school children require between 1,000 and 1,500 calories every day. The food calories must come from a variety of food sources so that children get all the nutrients such as proteins, vitamins and minerals. Most cooked foods consumed by children have an energy density of less than one calorie per gram of food. This means that pre-school children require 1 kg of cooked food from milk, rice, dal, eggs, fruits, nuts, flesh foods and vegetables with an extra dose of oil/fat, and even sugar every day to meet their nutritional needs. It is, therefore, laughable that two grams of spirulina daily can provide enough macro or micronutrients necessary for a child’s needs, as claimed by the companies. Worse, since the introduction of spirulina, government agencies in Karnataka have become irregular in providing normal foods to children.

The story of companies going to bed with corrupt health practices dates back much earlier in Karnataka. For instance, Christy Friedgram Industries (CFI) used to supply raw material to ICDS between April 2009 and May 2012 at a cost of Rs 600 crore annually. In April 2012, CFI was investigated by the Karnataka Lokayukta police for fraudulent practices in the supply of supplementary nutritional foods to anganwadis in connivance with officials from the Department of Women and Child Development (DWCD). Investigations revealed that CFI was supplying roasted and powdered cereal mixes with salt or sugar, which were stale and rancid. Most children refused to eat these cereal mixes. Parents too complained and wrote detailed letters to authorities about their children falling sick after consuming the food provided by CFI.

Soon after the CFI fiasco, the Karnataka government signed a contract with mining company Vedanta to provide mid-day meals to 200,000 schoolchildren in four districts in April 2012. This was viewed by experts as part of Vedanta’s public relations exercise in the wake of bad publicity surrounding its mining operations in Odisha.

In July 2013, a six-year-old child, Meghala, died due to severe acute malnutrition in D J Halli in Bengaluru. At a public meeting held in December that year, DWCD officials informed the jury that the Spirulina Foundation from Tumkur had approached them in early 2013, offering to distribute spirulina free of cost to pregnant women and children in anganwadis.

The fact that spirulina would be distributed “free of cost” was taken as adequate reason by DWCD to grant permission. The jury took objection to this, and said children from poor communities are not guinea pigs, and any intervention that lacks an evidence base should not be introduced in the community. “Clinical trials must be conducted and necessary laws must be put in place for such interventions,” says Clifton D’Rozario, a member of the jury. The Justice N K Patel Committee, constituted by the Karnataka High Court following a public interest litigation, advised the Karnataka government not to introduce new supplements just because they are free, and called for a clear treatment protocol. Subsequently, Bruhat Bengaluru Mahanagara Palike, the local authority, stopped supplying spirulina to mothers and children.

Against this backdrop, the state government’s decision to take “help” from Biocon to supply spirulina has come as a shock. The government defends its decision saying its pilot programme, carried out in association with the Jindal Steel Works (JSW) Foundation in Sandur taluk in Bellary district, had brought down malnutrition levels from 33 per cent to 8 per cent. But there is no validated evidence to back this claim. The DWCD has even set aside Rs 3.6 crore from the state’s budget to supply two grams of spirulina for 180 days to 25,000 children in Karnataka, as part of the Balposhna scheme “as recommended by JSW”.

The fact that corporate firms have independently started distributing spirulina to undernourished and malnourished children enrolled in anganwadis since 2012 raises several disturbing questions. Can firms such as Biocon, Spirulina Foundation and JSW independently access anganwadis and unilaterally distribute spirulina? Will they be held liable in the event of adverse drug reactions, death or disability among children who consumed spirulina? Does Biocon have a formal permission from the ICDS to distribute spirulina to children, particularly to children who are malnourished and already vulnerable to organ damage?

The trend of balanced meals being replaced with fortified biscuits and spirulina tablets seems to be driven by vested corporate interests. The government is abdicating its responsibility to guarantee food and health rights to its people by entering into partnerships with the commercial sector. Corporations are only too happy to capitalise on malnutrition by supplying pre-mixed food packets to anganwadis, and trumpeting their “social responsibility” even as they create markets for their fortified foods, says Radha Holla of the International Baby Food Action Network and the Breastfeeding Promotion Network of India.

A report by the Supreme Court Commissioner’s office in November 2012 says that “the contractor-corporate lobby has a firm grip over the ICDS ration supply business, worth Rs 8,000 crore”, with specific reference to Karnataka, Uttar Pradesh, Meghalaya and Maharashtra. The commissioners recommended an independent investigation under the apex court’s supervision to investigate the “possible nexus between politicians, bureaucrats and private contractors in the provisioning of rations to ICDS, leading to large-scale corruption and leakages”. Only political will can ensure children, especially from poor and marginalised communities, are protected against this corporate-driven agenda of making a business out of nutrition.