Long-term exposure to organophosphate insecticides puts the farming community at a higher risk of developing diabetes, shows a study 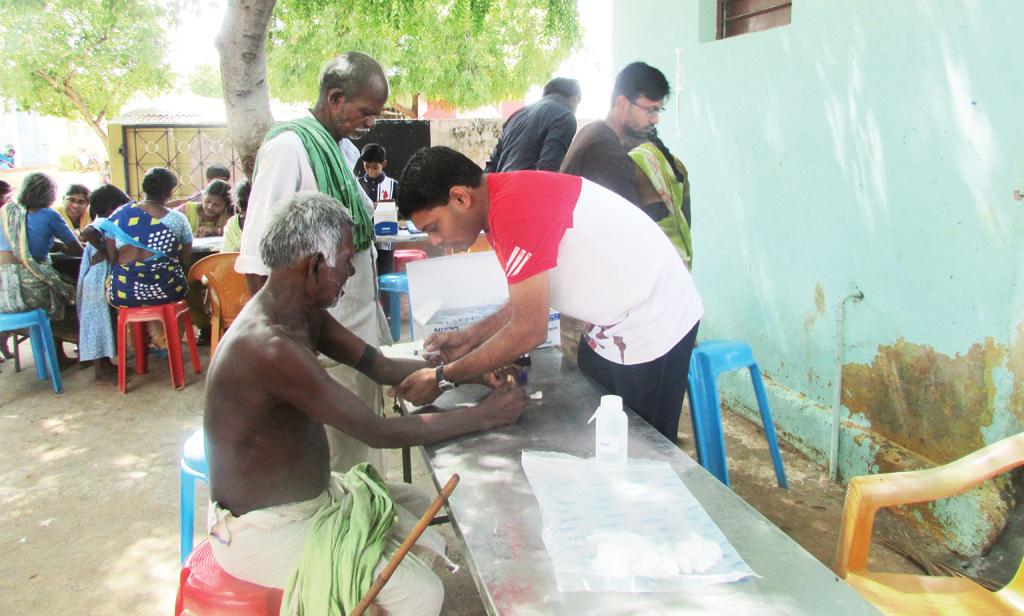 IN 2011, a 15-year-old girl from Madurai was admitted to hospital for diabetes ketoacidosis. It is a life-threatening condition that develops when cells in the body are unable to get the sugar (glucose) they need due to the lack of insulin. Krishnan Swaminathan, an endocrinologist and president of the Coimbatore-based Kovai Medical Centre and Hospital, saw that the girl was not responding to treatment. “We reinvestigated the case and found high residues of an organophosphate (OP) insecticide in her blood and urine samples. When we asked her parents, they told us she had consumed the insecticide because she had scored less marks in her school examination,” he says. Derived from phosphoric acid, OPs are a popular class of pesticides. They are also notorious as the poison chosen by farmers to commit suicide.

Around the time, the case of a 12-year-old boy suffering from a similar condition was reported from Mysuru, Karnataka. The boy had eaten tomatoes from a field without washing them only a few hours earlier. Swaminathan says that it was due to this impact of the chemical on the body’s insulin function that he first thought there could be a link between OP exposure and diabetes. The observations in these cases formed the premise of a study conducted by a team from the Madurai Kamaraj University to investigate the high prevalence of diabetes being reported from rural areas. “Chronic exposure to organophosphate not only induces diabetes but also leads to impaired glucose tolerance (type II diabetes) in both humans and mice,” says Ganesan Velmurugan, lead author of the paper published in the January issue of Genome Biology. Previous studies had shown a high prevalence of diabetes in rural Tamil Nadu, but this is the first study to link pesticide exposure to the disease.

The researchers surveyed 3,080 people from seven villages in Thirupparan-kundram block of Madurai district. Participants were above the age of 35 years. Almost 55 per cent of them were from the farming community and were, hence, more likely to be exposed to OPs. Based on the blood test results, it was found that the prevalence of diabetes among the farming community was three times higher (18.3 per cent) than that in the non-farming community (6.2 per cent), despite the low level of typical risk factors such as obesity, high cholesterol and physical inactivity.

Take the case of Sakthivel, a 50-year-old farmer from Vadapalanji village near Madurai. He grows vegetables such as tomatoes, okra, snake gourd and bitter gourd, in addition to paddy, on his 0.8-hectare farm. Once every week, he sprays his own farm and those of others with pesticides. He dislikes wearing a mask or gloves and even skips wearing protective boots. Until his blood was tested by the researchers in 2016, he was unaware that he was suffering from type II diabetes. Sakthivel is neither obese nor does he have a family history of the disease. Like others diagnosed with diabetes during the survey, he has now been put on metformin, a common diabetes medicine, and a strict diet.

To confirm whether chronic exposure to OPs leads to diabetes, the researchers fed insecticide-laced water to a group of mice for 180 days, which is equivalent to 12-15 years of human life. They found that the mice showed a slow and steady increase in their blood glucose levels, resulting in significantly high levels after 180 days. 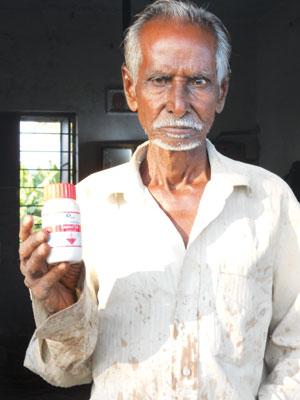 Just like nerve agents used in chemical warfare, OPs inhibit the function of an enzyme called cholinesterase, which ensures proper functioning of the nervous system. But researchers were surprised to find no changes in levels of the enzyme in the treated mice. They then investigated whether gut microbiota may have a role to play in the developing of diabetes. They transplanted faecal material from OP-fed animals to a new set of mice and found that the latter exhibited significant glucose intolerance and developed diabetes. The authors also noticed changes in the gut microbiota, including higher numbers of OP-degrading bacterial enzymes. Degradation of organophosphates produces short-chain fatty acids—specifically acetate—which in turn lead to the generation of glucose, elevated blood sugar levels and glucose intolerance.

The findings of the study assume importance as India is the diabetes capital of the world. As of 2015, more than 69 million people in the country were estimated to be living with diabetes (see ‘Diabetes Capital’). Changing diets, sedentary lifestyle, and a genetic predisposition to developing the disease are expected to result in an increase in the number of type II diabetics to 79.4 million by 2030. With factors such as the increasing and indiscriminate use of pesticides now coming into play, diabetes no longer remains an urban preserve.

But which factor is more responsible for causing type II diabetes is still not well-understood. “Before we conclude anything from a single study, many more such studies should be undertaken to establish the problem and to substantiate the findings,” says S Ramakumar, a diabetologist with Apollo Hospital, Chennai.

The potential health impacts of chronic exposure to OPs have been indicated in many studies. In 2015, the International Agency for Research on Cancer declared that organophosphate insecticides such as tetrachlorvinphos, parathion, malathion, diazinon and glyphosate are carcinogens. Other studies have shown that organophosphate exposure is associated with neurodegenerative disorders such as Parkinson’s disease and Alzheimer’s disease and metabolic disorders such as diabetes and hypertension. It is also known to cause neurological disorders in infants and young children. What makes OP exposure worse is the lack of awareness about safety gear among farm workers.

In Sundarajpuram village near Madurai most farmers do not take precautionary measures such as wearing masks and gloves while spraying insecticides. “I do not often wear a mask or gloves because it is inconvenient. Sometimes, I forget to wear them,” says 67-year-old Subramanya, president of the local farmers’ association. Others say that though pesticide sellers inform them about the precautions to take, they do not follow them. OPs are sprayed by diluting them in water. They are, hence, easily absorbable through direct exposure to skin, mucosal linings and respiratory tracts.

After countries started regulating or banning DDT (dichlorodiphenyltrichloroethane), an organochlorine insecticide, in the 1970s due to its effects on the environment, OP insecticides came to be used widely across the world. OPs account for 40 per cent of the global pesticide market. 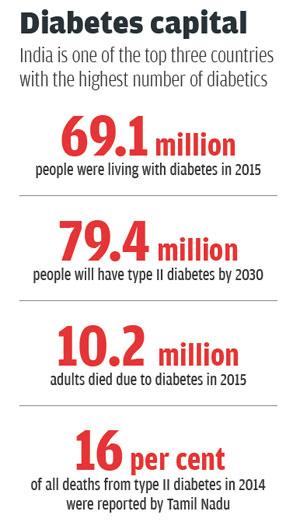 Though many studies have called for OPs to be banned, they continue to be used in many countries. In India, pesticide use is regulated by the Central Insecticides Board and Registration Committee (CIBRC) and the Food Safety and Standards Authority of India (FSSAI). As of October 20, 2015, the CIBRC has completely banned two OP pesticides and regulated the use of four others. Of the four are methyl parathion, which is banned for use on fruits and vegetables, and monocrotophos, which is banned for use on vegetables. Yet, they are used extensively by farmers in Tamil Nadu, says Velmurugan. In fact, he had filed an RTI against some of the state’s agricultural universities, which listed these banned pesticides on their websites and even recommended their use.

But the response to his queries was not satisfactory. Kalpana Ramasamy, assistant professor at Agriculture College and Research Institute of the Tamil Nadu Agriculture University tells Down To Earth that though agriculture universities are now recommending green-labelled pesticides (a green label means “slightly toxic”) to farmers, a complete ban will not be successful until an alternative to OP pesticides is found. According to a 2016 report by the Federation of Indian Chambers of Commerce and Industry, 60 per cent of India’s crop protection market is occupied by insecticides. The study’s authors insist on the importance of spreading awareness about the effects of OP insecticides, especially in an agrarian country like India. “One must educate farmers about measures such as washing and soaking vegetables before use and wearing appropriate gear before spraying the pesticide. If awareness is not created now, in the next 10 years, the burden of this problem will be immense,” says Swaminathan, an author of the study.

To deepen their understanding of the impact of organophosphate exposure, the researchers will investigate the molecular mechanism and genetic interactions of gut microbiota to devise diagnostic and therapeutic strategies. The team has, in collaboration with Kovai Medical Centre & Hospital in Coimbatore and the Indian Institute of Technology, Chennai, collected a large set of human blood and urine samples from rural, semiurban and urban regions to study the impact of all kinds of chemicals. They are also collaborating with Madesh Muniswamy, scientist at Temple University, Philadelphia, USA, to study the effect of chemicals on the function of mitochondria, the organelle of the cell responsible for energy production, in people suffering from diabetes and cardiac diseases.

This story was published in the March 1-15, 2017 issue of Down To Earth magazine under the headline "Toxic Spray".