India cannot eradicate tuberculosis unless it treats the infection in cattle. The country accounts for 23 per cent of the global TB burden 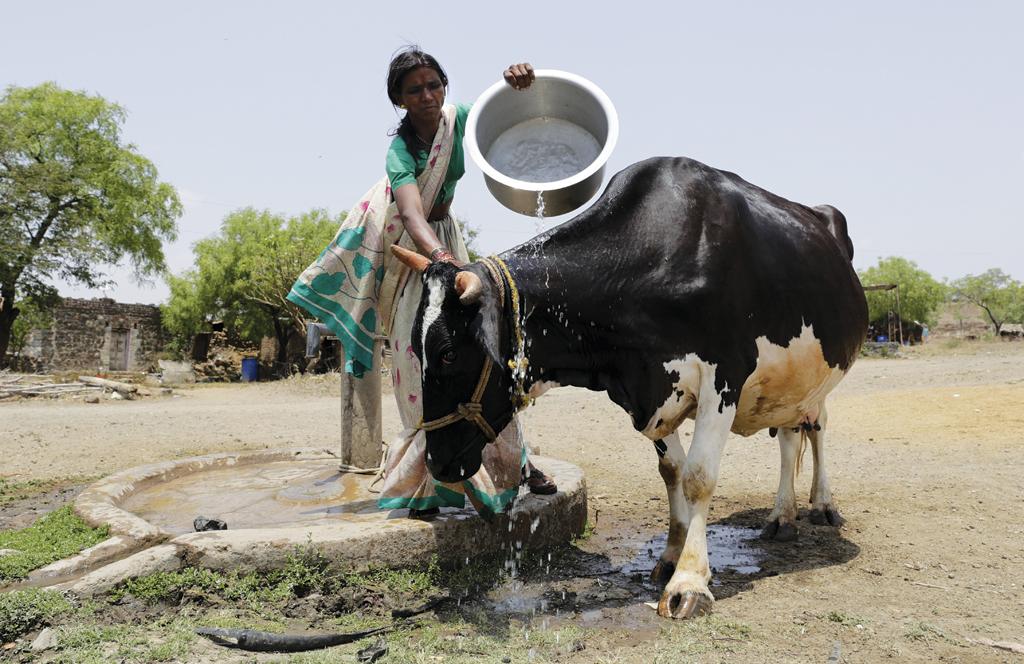 Bovine TB could be responsible for up to 10 per cent of TB cases in humans (Photo: Vikas Choudhary)

For a world free of tuberculosis, the World Health Organization has set a few targets: reduction of incidence rate by 90 per cent and deaths by 95 per cent by 2035 from the 2015 levels. To comply with the targets India—that accounts for 23 per cent of the global TB burden—has adopted newer strategies and tools. It is also coping with challenges like emergence of drug-resistant TB. It may still fall short of the targets because the strategies ignore a crucial factor—transmission of TB from animals, especially cattle.

Mycobacterium tuberculosis is a pathogen that primarily causes TB in humans.

Occasionally people also get infected with M bovis, the primary pathogen of bovine TB. But this burden of zoonotic TB (transmitted from animals to humans) remains underestimated, says a review of studies published in The Lancet Infectious Diseases in September. Authors of the review call for a critical evaluation of zoonotic TB, especially in areas where TB is endemic and where people live in close proximity to infected animals or consume raw dairy products. Earlier in 2012, the International Livestock Research Institute had estimated that bovine TB could be responsible for up to 10 per cent of human TB cases.

These studies are alarming for India, which accounts for 52 per cent of the global cattle population and where cattle are an integral part of rural households. In the absence of a national agency to document the prevalence of bovine TB, let alone study its transmission to humans, existing research paints a disturbing picture.

A study published in Veterinary World in 2010 shows high prevalence of bovine TB in dairies in Himachal Pradesh. The researchers from Dr G C Negi College of Veterinary & Animal Sciences, Palampur, screened 440 cows from six dairies and found 63, or 14.3 per cent, of them suffering from the disease. In one farm, 34 per cent of the cows had TB. While the study does not specify the bacteria that caused TB in the animals, another research, published in Transboundary and Emerging Diseases in 2013, says M tuberculosis is also capable of causing bovine TB. The researchers examined autopsy lung tissue samples of 30 TB-suspected animals from a dairy in North India, and found that eight of them were infected with M tuberculosis. This suggests possible adaptation of the bacteria in cattle and subsequent cattle-cattle and cattle-human transmission, concludes the study.

Such bi-directional transmission capability of the bacteria duo poses a serious challenge to the eradication of tuberculosis. Experts say even if the disease is eradicated, it can stage a comeback from animals either through M bovis or M tuberculosis. However, there is little awareness of how the bacteria infect several host species. 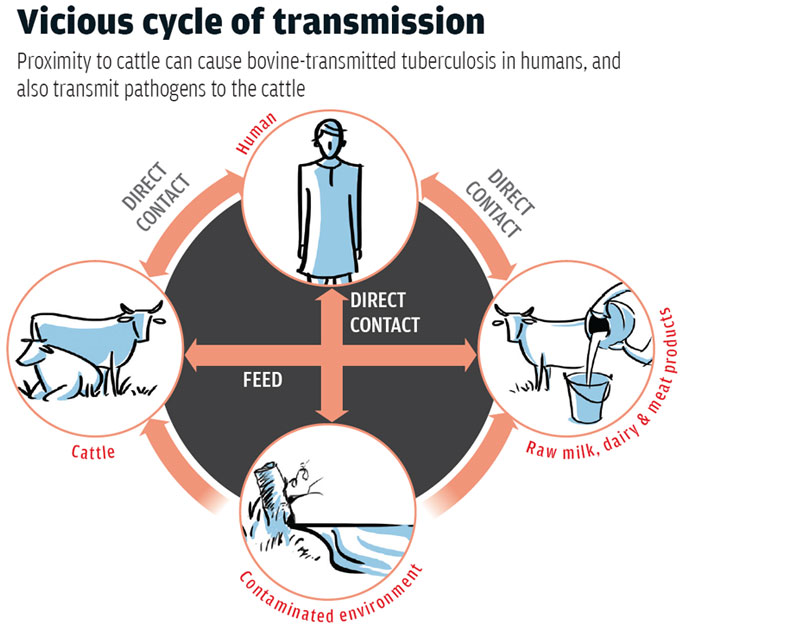 Sarman Singh, who heads the division of clinical microbiology and molecular medicine at the All India Institute of Medical Sciences in Delhi, says M bovis can infect humans living in close proximity to infected cattle or consume contaminated, unpasteurised dairy products. Increasing consumption of raw milk is leading to increasing cases of intestinal TB, and most of these cases are caused by M bovis, he adds.

Though direct transmission of the bacteria from animal to humans through air is thought to be rare, it can spread from person to person when people infected with the disease in their lungs cough or sneeze.

Animals usually get infected with M tuberculosis while feeding on contaminated grazing area, shows a research published in the Indian Journal of Medical Research in 2008. The researchers analysed 768 specimens from 161 cattle from a farm of Meerut Cantonment, Uttar Pradesh, and found that over 28.5 per cent of the milk samples and seven per cent of pharyngeal swabs taken from the animals tested positive for M tuberculosis. Maybe, the animal handlers had TB, and they passed on the disease to the cattle by indiscriminately spitting and urinating in the grazing area, note the authors. This was demonstrated in a study conducted for a decade by J M Grange, a scientist from the Centre for Infectious Diseases and International Health, Windeyer Institute for Medical Science, London. It showed that a farmer infected 48 healthy cattle in four herds by urinating in their shed.

Singh says research suggests that the prevalence of bovine TB in humans in India is around 1 per cent, where as 6-7 per cent captive animals (this includes livestock, animals in zoo and pets) are infected with human TB. And this calls for an urgent control and prevention strategy.

Until the 1920s, bovine TB was regarded as a major disease of domestic animals in developing countries. They have managed to contain its spread through systematic implementation of prevention and control measures that include tuberculin skin test and subsequent slaughter of infected animals, and followed up with sanitary surveillance in slaughterhouses. Singh says hygiene is the most crucial controlling measure. In many European countries, the entire herd is culled even if one animal is detected with TB.

While India needs to learn from international experiences, it also needs to overcome several challenges. For instance, there is no protocol to test and slaughter infected animals. Even the diagnostic tests are expensive. In the absence of sufficient veterinary experts and research on the epidemiology of zoonotic TB, the disease remains scot-free.

Mitesh Mittal, who was part of the 2013 study and works with Secunderabad unit of the Defence Institute of Bio-Energy Research, says that it is time India had a protocol for diagnosing the Mycobacterium strains and encouraged research to develop the vaccine against bovine TB.