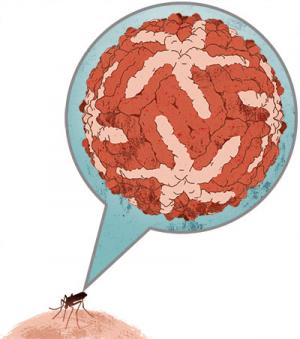 Kerala is on high alert after a seven-year-old boy from Malappuram district died of West Nile infection on March 18. The incident has set alarm bells ringing among the country’s health authorities. The child is the first human casualty of a virus that had so far caused only sporadic incidences of fever in the country. No other case was reported from Kerala or any other part of the country following the incident till the magazine went to print. Is it an isolated incident or the beginning of an outbreak?

The boy was suffering from fever and flu-like symptoms when he was brought to hospital. “The virus seemed to have affected his nervous system and this led to complications due to which he suffered a cardiac arrest and succumbed to it,” says Sakeena K, district medical officer of Mallapuram. The Directorate of Health Services has since asked all public and private hospitals to report any suspicious case of West Nile infection. “Hospitals will strictly monitor all cases of fever with vomiting, headache or disorientation and if required, collect necessary samples and send them for testing to the National Institute of Virology,” says Sarita RL, director, Kerala Health Services. To assess the situation, the district collector organises weekly review meetings.

The Union health ministry has dispatched a multi-disciplinary team from the National Centre for Disease Control (NCDC) to Malappuram to study the prevalence of the virus.

West Nile Virus mostly confines its transmission to birds and mosquitoes. Birds act as carriers and amplifying host for the virus, with crows more susceptible to it, while Culex mosqui toes are the usual vector. Though transmission of the disease to humans is occasional, the virus has caused human infections across the globe since it was first isolated from a woman in West Nile district of Uganda in 1937. “Every year, the US reports hundreds to thousands of cases of West Nile fever,” says Nathan Grubaugh, researcher at the Yale School of Public Health who tracks mosquito-borne diseases. Estimates show 7 million people in the US have contracted the disease since 1999; over 2,100 have succumbed to it.

Though the infection has so far been rarely reported in India, health experts are worried because there is no specific treatment or vaccine for it. As per the US Centers for Disease Control and Prevention (CDC), only 20 per cent people infected with the virus develop fever; the rest remain asymptomatic. “Though fever develops into the more severe neuro-invasive form of infection in a few patients, symptoms are prominent among the elderly and those with compromised immune system,” says Grubaugh. Complications can occur leading to meningitis and the patient can succumb to the illness. Besides, India is home to several mosquitoes, such as C tritaeniorhynchus, C vishnui, C bitaeniorhynchus, C univittatus, C pipiens fatigans and Aedes albopi ctus, that act as the vector.

To identify reservoir of the virus (organisms that can act as a source of further infection), the State Surveillance Unit and the Vector Control Research Centre of the Indian Council of Medical Research (ICMR) at Kottayam collected samples of mosqu itoes and dead crows from around his house. The samples were sent to the National Institute of Virology-Kerala unit, in Alappuzha, but tested negative for West Nile Virus. The team now plans to study more samples.

While NCDC has not shared its findings, with both the birds and mosquitoes testing negative for the virus, it is not clear how the child contracted the disease.

However, as a preventive step, the state health department has started administering Japanese Encephalitis (JE) vaccine to 18-month-olds in Alappuzha and Thiruvananthapu ram districts that report high incidences of acute encephalitis synd rome (AES) cases, an acute inflam mation of the brain that can be caused by infections by several viruses. It is also trying to secure a nod from the Union health ministry to extend the programme to Malappuram and Kozhikode . “West Nile Virus belongs to the family flavivirus and is thus closely related to viruses that cause JE. So, taking vaccination for JE can protect one from contracting West Nile infection,” says Asha Raghavan, surveillance medical officer (Kerala) at WHO. Since Culex mosquitoes become more active in summer, the state has also stepped up its mosquito management programme.

Will this deter the virus?

The virus has made its presence felt in the country a few times earlier too. The National Health Portal (NHP), main- tained by the Union health ministry, says West Nile Virus is highly prevalent in India. Infections were reported from Tamil Nadu’s Vellore district and Karnataka’s Kolar district in years as far back as 1977, 1978 and 1981.

Several studies analysed by Down To Earth suggest that virus is usually present in areas that frequently report cases of AES. According to NHP, the virus was first documented in the Northeast in 2006 from four districts of Assam that are known endemic areas of JE. A study published in the Journal of Medical Virology in March 2019 reports that in Madhya Pradesh, the virus was found in the cerebro-spinal fluid samples from 75 children suffering from AES. Researchers have also found West Nile Virus in the blood samples of patients during a 2011 AES outbreak in Kerala. In fact, 235 patients tested positive for West Nile Virus, compared to 179 for JE, says a study in Indian Journal of Medical Research in July 2017.

A study by Kolkata researchers throws an interesting insight. At the Kolkata virus unit of ICMR, that functions as apex referral laboratory for detection of dengue and chikun gunya, the researchers analysed 574 blood samples that tested negative for dengue and chikungunya; 224 of them tested positive for West Nile Virus. Though the researchers had employed two advanced laboratory techniques to identify the virus, ELISA could find it in 14.5 per cent samples, and RT-PCR in 24.56 per cent samples, says the study published in Transa ctions of the Royal Society of Tropical Medicine and Hygiene on April 1, 2017. Does this mean we have been ignoring its presence all along?

(This article was first published in Down To Earth's print edition dated April 16-30, 2019)