Women in a settlement in the north-eastern peri-urban part of Indore learnt that gentle, perseverant negotiation was the best way forward 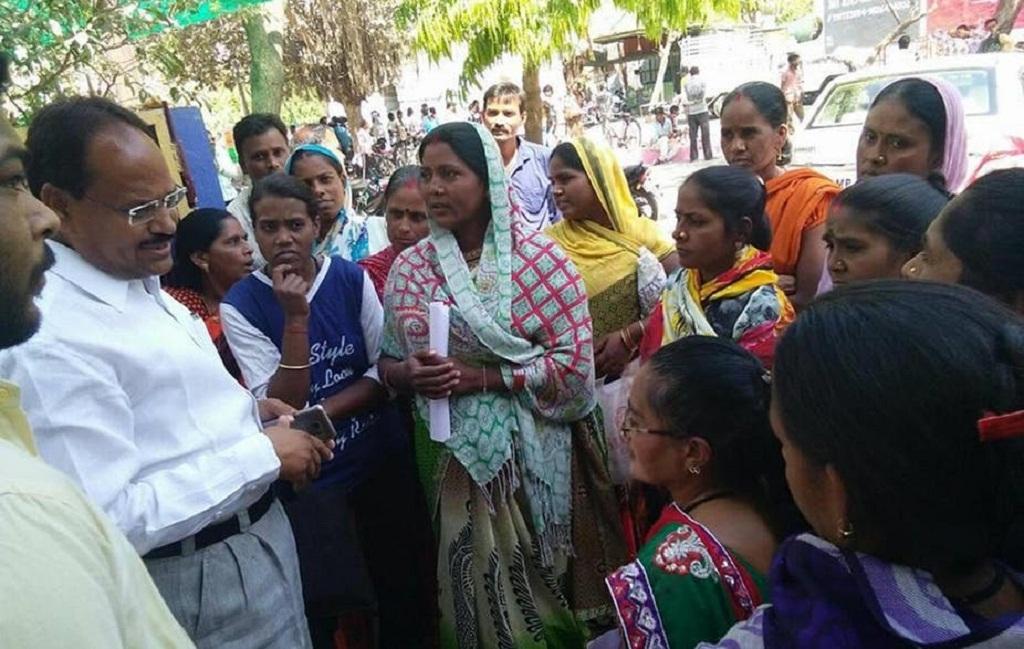 Women presenting their demands to the elected ward of their district. UHRC

How do you convince your local municipality officer that yes, you have every right to access clean water, walk on paved streets or have streetlights at night so you can feel safe? And how do you do that when you are not only living in an Indian slum, but you’re also a woman with no formal education?

This is exactly the case we studied in Indore, the most populous city of Madhya Pradesh, a western-central state of India. According to the census of India, the population of Indore was 2 million in 2011 and has since increased to 2.8 million inhabitants in 2018. About 30% of that population lives in slums, which are growing rapidly.

According to the latest census, there are about 13.7 million slum households in all of India, of which 4.9 million are neither recognised nor notified. Considered as informal, such settlements are often deemed illegal by authorities, especially when newly formed. This supposed “illegality” presents challenges to the residents, adding housing instability and fear of displacement to their struggle of finding livelihood while trying to settle down in a new city.

At the same time, several government policies such as the National Urban Health Mission mandate the inclusion of listed and unlisted slums as well as vulnerable populations for services pertaining to living environment such as water supply, sewage, electricity and streets, all of which impact health.

The Indian government does not formally designate any human habitation as “illegal” in policies. However, officials and elected municipal representatives often consider slums de facto “illegal”. At the same time, slum dwellers being recognised as voters with a basti (slum) address on voter cards shows that the illegality can be overcome.

Service provision can be quite slow for many segments of the population and often exclude weaker and vulnerable sections of the society. Consequently, continuous proactive efforts are necessary to “pull” services from the government so that they reach the vulnerable habitations.

An attractive strip of land

The north-eastern peri-urban part of the city of Indore has attracted a population of poor migrants from Rewa and Khargaon districts in Madhya Pradesh and from Uttar Pradesh and Bihar (northern Indian states). Initially about 20 to 30 families moved and developed a settlement in 2014. Previously consisting of a fairly small strip of land and a brick kiln, it served as a site for open defecation and garbage dump for residents of other slums in the vicinity.

It was only when the land was purchased by a real estate broker, who cleared and levelled the site, that this until then unnamed-area started gaining the attention of migrants. The newly emerging settlement presented the possibility of lower-cost housing relative to other slums in Indore and the opportunity to earn livelihood working in nearby factories, construction sites and market places.

Migrants started settling in the area amid unpaved paths, with no electricity or running water. Unpaved streets hampered the movement of residents to and from the settlement and were a hazard for children playing outside. The lack of electricity and water forced residents to travel long distances to fetch water, and left them with no fans in Indore’s 40° or 45° Celsius peak heat-waves and no lights in the dark.

Women standing for their rights

How would the new residents face up to these challenges? Often, civic authorities dismiss their demands by saying “there is no scheme presently” and “there are no orders right now”.

Women of the emerging settlement learned about the activities of our organisation, the Urban Health Resource Centre (UHRC), which mentored and trained women’s groups with 12 to 15 members in neighbouring slums to help them access various services.

In early 2015 members of these newly formed women’s groups discussed with more established groups in the neighbouring bastis as to what actions they had undertaken to obtain municipal services. They learned that gentle, perseverant negotiation was the best way forward.

Through UHRC’s training and with the help of women from other, more established groups, residents of the new area acquired knowledge and skills about writing petitions in the local language, Hindi, and submitting them to the ward councillor, the municipal corporation and at the district public hearing. At the top of the list were improvements such as paving streets and running water. When the ward councillor rejected their application, saying their basti was “illegal”, the women asserted their rights as citizens and highlighted the value of their votes in elections.

A petition was submitted in December 2016 followed by several in-person representations to the ward councillor in the next six months and several written reminders. In November 2017, when the ward councillor visited the neighbourhood, the residents gently urged him to have the bore-wells installed. As a temporary measure, the community informally accessed water by paying families of the adjacent older slums (who had their private bore-wells) at a monthly rate of INR 100 per family.

The mentoring role of previously established groups is analogous to the emergence of informal solidarity networks in Greece when the government introduced austerity measures owing to an economic collapse beginning 2009-10.

These informal solidarity networks played a crucial role in helping people overcome difficulties caused by austerity measures and economic instability. The support and guidance of more established community groups helped UHRC learn that the presence of stronger groups has a “ripple” effect on neighbouring settlements. We also learned that soft skills such as tact and a no confrontational approach toward authorities, negotiations through community requests sustained over a long period of time can bring services to informal settlements and help overcome the notion of “illegality” held by officials.

The strategies in place eventually successfully “pulled” services from the municipal corporation and benefited a population of 1,575.

Created in 2007, the Axa Research Fund supports more than 500 projects around the world conducted by researchers from 51 countries. To learn more about the work of Dr. Siddharth Agarwal, visit the dedicated site about The AXA Outlook Award action research entitled “Knowledge and Action Bridge towards Community Risk Assessment and Resilience Building” which is implementing actionable solutions to overcome slum level challenges by foregrounding community wisdom.