Why India's local health traditions need to be formalised

By Rajeev B R 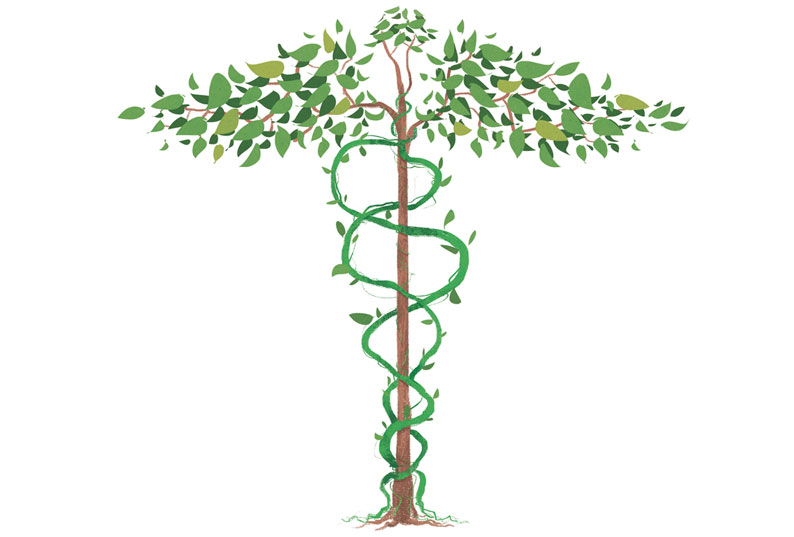 A few months ago, Tony, a colleague of mine in Gudalur—a small tribal town in Tamil Nadu’s Nilgiris district—complained of mouth ulcers. He whined about black circles, lack of sleep and loss of appetite. Maadhan, another colleague from the local Adivasi community, advised him to eat the tender fruits of manathakkali (Solanum nigrum), a wild herb. Tony ate the ripe fruits diligently for two to three days and the ulcers eventually disappeared. Normally, as a biomedically trained dentist, I would have prescribed an anaesthetic ointment and vitamin supplements. I did not realise the cure for the ulcers was right in the garden attached to my workplace.

Tony’s ulcers happened at a time when I was enquiring, as a part of a research project, about the legitimacy of the Local Health Tradition (LHT) practices among Siddha vaidyars (healers) and Adivasi healers in Tamil Nadu. The study aimed to understand “LHT’s revitalisation”.

In Tony’s case, the herbal treatment received was primary and affordable healthcare. There is community support for LHT in Gudalur, which perhaps, has kept this tradition alive, as must be the case in many other parts of India. In Tamil Nadu, LHT is practised by pacchamarundhu vaidyars (“green” or herbal medicine healer) among the Adivasis, and by paramparika Siddha vaidyars (traditional Siddha practitioners) elsewhere. For both types of healers, knowledge has been passed from one generation to another: healer families protect it as their intellectual property. In many places, I found that paramparika vaidyars enjoy a special social status entirely attributed to their ªpower of healingº which gives them traditional legitimacy.

Analysing Tony’s experience, besides other related research and interviews with healers, intricate nuances of the LHT practice came to the fore. Earlier last year, an Adivasi community worker accompanied me to the residence of an elderly healer in a remote tribal hamlet near Gudalur. He noted that ªmany people here, mostly tribals, still go to healersº. He also observed that the older the healer, the larger his/her patient following. The healers represent a parampara or tradition. According to a healer from Vellore, several Siddha traditions trace their origins to the wandering mendicants who passed it to the family of the Siddha vaidyars centuries ago. The traditional legitimacy which the lineage offers reinforces the thought that the older the practitioner, the richer the knowledge, and thus, the stronger the following.

Parampara denotes a succession of teachers and disciples in traditional Indian culture. It is the tradition of relationship and mentoring where teachings are passed on from a teacher to the student. The knowledge transfer and training is rigorous and starts as early as four years in the case of Siddha vaidya. The knowledge is transferred orally with emphasis on observation. Siddha vaidyars spend the early years as apprentices until they are ready, as opposed to a Siddha doctor who earns a Bachelor of Siddha Medicine and Surgery after five years of college education. The parampara is held in high regard and enjoys immense community support.

Healers typically do not demand monetary compensation for consultation— they accept whatever is given to them. Sometimes, clothes and fruits are given by a recuperated patient, or payment is made for the preparation of medicines. Healers don’t get monetary gains from healing—an important distinction from quacks.

For tribals, an Adivasi healer who is a member of their community will often enjoy greater acceptance than a western biomedicine-trained doctor. They are socially relevant in rural society and are the immediate point of contact, forming the fundamental part of primary healthcare. A successfully-treated patient refers the healer to more of his/her peers, as I learned from an elderly non-tribal healer in Gudalur who treated patients in far-off towns and cities. Healers are sympathetic to patients’ emotions. There is an unexplained vishwasam (faith) in the healers among patients. The healers are service-oriented and see the healing as a punyam (virtuous deed).

Further, Adivasi healers are rarely antagonistic towards hospital care. As one elderly Adivasi healer mentioned, “No one went to the hospital. It was all in the house, whatever happened. If nothing could be done, then we used to go to the hospital.” Integration is practised at the community level and encouraged by these healers, even though it may be neglected or dissuaded in official policy. In contrast, Siddha vaidyars often emphasise the inadequacies of western medicine and even codified systems like the Siddha degree.

Notwithstanding these differences, all healers acknowledge the distinct nature of their practice. As anthropologist Helen Lambert says, based on her work on haad vaids (traditional bone doctors), many LHT are experience based, where training is based on practice and observation rather than textbook or school learning. Haad vaids like pacchamarundhu and parramparika Siddha vaidyars are primary healthcare providers. They have been part of the public health system across the country, yet they operate on the margins as a subaltern practice because of regulations by the Indian medical boards. This is primarily due to state neglect of LHT and increased investments in western biomedicine.

What does this mean for legitimacy?

For the state, legitimacy is derived from certification from institutionalised training and standardised practices. So LHT is outside the strict legitimacy boundary for the state. But healers respond to the demands of legal-rational authority/legitimacy from various angles.

Our research suggests that the stronger a health tradition’s legitimacy, the greater the confidence in practice. In this scenario, some healers don’t seem to see the necessity for legal-rational authority. Others see its potential role in complementing the existing practice which has traditional legitimacy. As a Chennai healer put it: ªIf registration was there I could have practised it on a bigger scale. You can’t drive a vehicle without a licence,” he says.

Yet another healer didn’t seem to care about registration; he attributed his legitimacy to the success of his treatment evidenced by patients’ referral. For the traditional healers in Tamil Nadu, Kerala and Karnataka, legitimacy has come from myriad sources: the authenticity of the knowledge system they possess, allegiance to a larger organisation (like Tamil Nadu Paramparika Siddha Vaidya Sangam), and favourable results of treatment, which got them a loyal following. So most of the traditional healers have traditional legitimacy where the authority is legitimated by the sanctity of the tradition.

However, the compulsory state professionalisation of medicine has pushed LHTs on the margins. Those belonging to this marginal space practise esoterically. There is an urgent need to formalise LHTS within the health system. LHTS are locally relevant and appropriate in a resource-strained system providing remedies within the vicinity just as seen in Tony’s case. The conversion of these details into a policy prescription is challenging because of the fluid nature of the traditions. The current slogan of policy documents on revitalisation of LHTS need to take these traditions’ vibrant nature into account and not literal impositions of standards and practices alien to such traditions.