While the total number of cases in India declined in 2018, there was a bump in less susceptible states like Uttar Pradesh

On World Malaria Day, as India joins the world in renewing its commitment to eliminate the disease from the country by 2030, policymakers have a worrying situation: a rise in the number of cases in states not so prone to the disease.

Take the case of Uttar Pradesh. The number of malaria diagnosis more than doubled there to 65,000 in 2018 from 30,000 a year ago, according to data from National Vector Borne Diseases Control Programme (NVDCP). India's most populous state is considered one of the less susceptible to the mosquito-borne disease.

On the other hand, there have been fewer cases in states that have traditionally been malaria-prone, such as Odisha, Jharkhand, Chhattisgarh, Madhya Pradesh, Maharashtra and those in the North East, according to World Health Organization (WHO).

Lakshadweep witnessed the highest percentage increase — a swell of 400 per cent — in 2018. There were also increases in Tripura and Himachal Pradesh. Overall, though, there was a drop in the number of cases.

“States which are malaria-prone are taking malaria control programme seriously and showing results. But others like UP and Bihar don’t because they think it is not a disease which affects them much,” said PL Joshi, former director of NVBDCP.

Another reason why malaria is spreading in low-incidence states could be the continuous influx of mobile and migrant populations from neighbouring moderate or highly endemic states and bordering countries, says National Framework for Malaria Elimination in India.

India has the third-highest burden of malaria cases in the world and contributes to more than 89 per cent cases in the south-east region.

The incidence of malaria was more or less static till 1993. “After a more or less static situation of malaria for a decade up to 1993, there have been focal outbreaks since 1994. During 1994, Rajasthan, Manipur and Nagaland reported outbreaks. During 1995, Assam, Maharashtra and West Bengal experienced outbreaks. In 1996, Rajasthan and Haryana were subjected to it and in 1997, Gujarat and Goa reported the disease outbreaks,” read Status of Malaria in India report authored by Shiv Lal, former director of National Anti-Malaria Programme.

“During 1998, there were focal outbreaks in Bhandara district in Maharashtra, and Calcutta in West Bengal. Goa has been recording increasing malaria incidence continuously for a few years,” the report added.

Experts are now worried about pan-India incidence of malaria. They also say eliminating malaria by 2030 would be a big challenge as diverse climate patterns are one of the driving factors.

“India’s expansive geography and diverse climate supports ideal environments to sustain malaria parasites and their vectors. The climate varies from tropical monsoon in the south to temperate in the north, but has four major climatic zones: mountain climate, tropical wet climate, tropical dry climate, and subtropical humid climate,” says a paper titled Malaria in India: The Center for the Study of Complex Malaria in India. 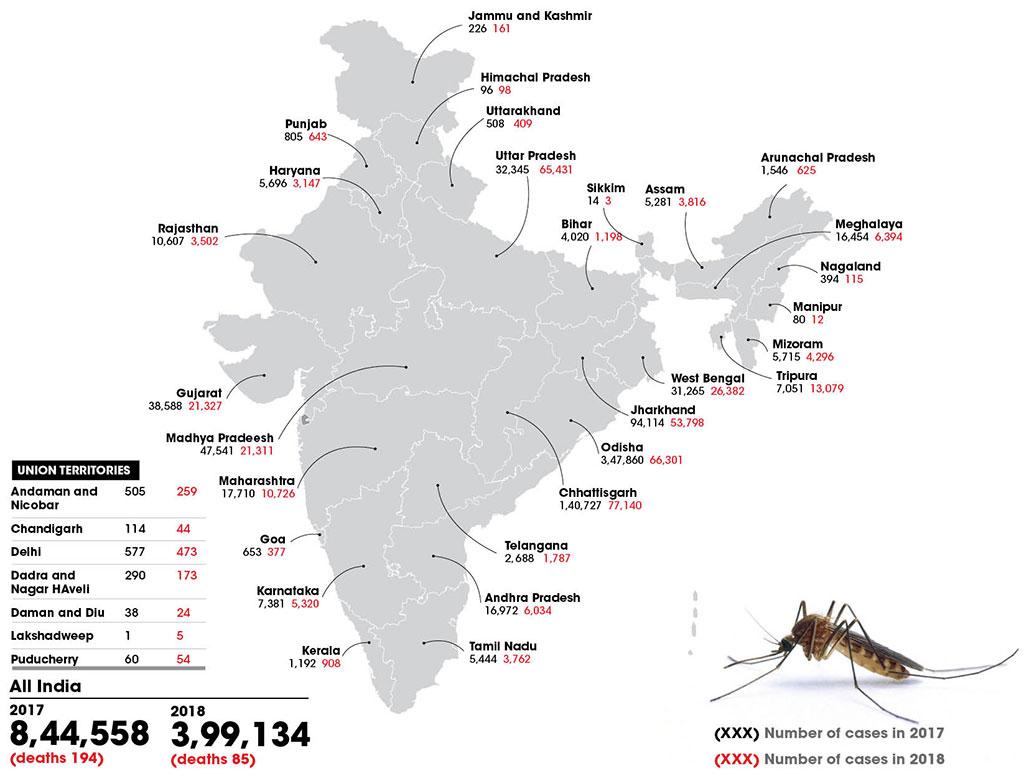 Much needs to be done to improve the surveillance system. “Surveillance is at the heart of the malaria elimination programme, not only to assess transmission intensity in each district and thereby stratify it for interventions but also continue to monitor impact of interventions,” explains another paper titled Eliminating Malaria in India by 2027: The Countdown Begins published in August 2018.

The authors say a malarial case is still not designated so still there is a positive blood smear test which may not be possible in far flung and resource-hit areas. Therefore, the authors say even if the rapid diagnostic test has confirmed malaria, it should be counted as one.

Also, many of the malarial cases land up in private health facilities and despite malaria being made a notifiable disease last year, the implementation remains poor.  Moreover, drug resistance will have to be carefully monitored as part of the elimination programme and coverage of key interventions like distribution of insecticide-treated bed nets, spraying insecticides and awareness activities remain less than 50 per cent, say the authors.