Healthcare in Malwa in shambles 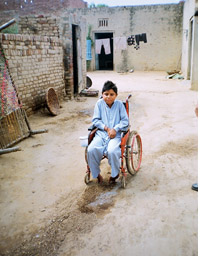 Punjab's Malwa region, south of the Sutlej river, grabbed national attention a couple of years ago when its steeply rising cancer graph came to light. Studies had revealed the link between heavy pesticide use and the disease. Little has changed since then. Medical facilities remain dismal and farmers are still ignorant about the dangers of pesticide overuse.

"The Malwa region is a cotton belt and pesticide use is the highest here. The farmers here have been using pesticides for decades and the fallout is becoming evident in the rising number of cancer cases," explains G P I Singh, head of the department, Community Medicine, Dayanand Medical College, Ludhiana. Malwa consumes 75 per cent of the pesticides used in Punjab, as per the 2007 State of Environment Report (soer) prepared by the Punjab State Council for Science and Technology and released on August 28. The state, in turn, uses 17 per cent of the total pesticides applied in India (see box: Toxic treatment). Although pesticide use in Punjab came down from 6,900 tonnes in 2003-04 to 6,000 tonnes in 2005-06, officials say it is likely to increase due to a mealy bug attack this year. "While last year we had to spray only five times, this year we have already sprayed 16 times," says a farmer in Bathinda.

Ferozepur, Faridkot, Muktsar, Bathinda, Mansa and Sangrur, six of the nine districts in Malwa, are the worst affected. Bathinda, with a population of 1.2 million, heads the list with 711 cancer cases, according to the latest statistics--of 2005--available with the state health department. This means nearly 59 cases per 100,000 people. While the government points out this is lower than the national average--70 per 100,000--social workers in Malwa say the actual number of cancer cases are much higher. Officially, there have been 2,472 deaths from cancer in Bathinda, Muktsar, Faridkot and Mansa in the past 10 years. But Umendra Dutt, executive director of Faridkot-based ngo Kheti Virasat Mission, says there would have been at least 10,000 deaths in the region.
In Bathinda, Jajjal village, with nearly 500 households, leads the pack with 85 cancer cases reported in the past 10 years. In almost every street you will find a cancer patient. Gurjant Singh Premi has witnessed eight cancer deaths in his family. Doctors have diagnosed a hole in his lungs. He also complains of kidney trouble. Despite this he sprays pesticides on the cotton crop. Octogenarian Karnail Singh and his wife Balbir Kaur stopped going to Bikaner's Acharya Tulsi Regional Cancer Centre. "The medicines were too strong and we became too weak to travel. So now when we are in pain we take painkillers," says Kaur.

In neighbouring Malkana, 11 cancer cases were reported in the past one year--three patients died. Doctors say several patients also complain of allergy, asthma and joint pain. "The number of women suffering from cancer in the uterus has gone up. There have been several instances of children either being born handicapped or becoming handicapped," adds Jasvinder Singh, a doctor. Jajjal's Jagdev Singh, 14, was normal three years ago; now he is bound to a wheelchair. He would complain of weakness in his legs, eventually becoming immobile. Doctors diagnosed a spinal cord problem. Gurudarshan Singh dropped out of school two months ago after he lost sight in the left eye. "Soon his right eye was affected. Doctors said there were holes in the retina," says his mother Gurpreet Kaur.

Three of labourer Chinder Kaur's four children are handi handicapped. Two were born with physical deformities, while the youngest lost his capacity to move his legs at 8 months. G P I Singh explains: "Cancer is just one of the fallouts of pesticide use. 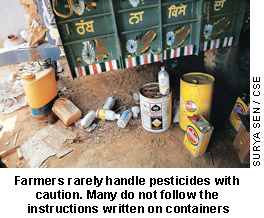 soer acknowledges the threat posed by pesticide use and water contamination. It refers to a study carried out in Malwa by the Centre for Science and Environment (cse) in 2005 and another conducted the same year by the Post Graduate Institute of Medical Education and Research (pgimer), Chandigarh (see 'Residue of a revolution', Down To Earth, June 15, 1999). After cse raised the issue in 2005, the Punjab government constituted two committees. The one headed by the chief minister has not met in the past two years. The pgimer study had confirmed that heptachlor levels in both tap water and groundwater in Bathinda's Talwandi Sabo block were higher than permissible limits. Heptachlor is a chlorinated insecticide which is persistent in the environment and accumulates in the food chain. Its use is severely restricted under the Stockholm Convention on Persistent Organic Pollutants. Besides heptachlor, pesticides aldrin and endosulfan were also detected in the blood samples of cancer patients in Talwandi Sabo and Rupnagar's Chamkaur Sahib block. Aldrin can affect the nervous system.

soer also enlists several studies conducted in the past three decades indicating high incidence of pesticides in groundwater, vegetables, breast milk samples and animal produce. The state pollution control board confirmed the presence of pesticide residues in water and sediments of the Sutlej, Beas and the Ghaggar rivers. It was the highest in the Sutlej.

pgimer had recommended steps to mitigate pesticide impact but action seems restricted to paper work. We suggested training farmers for the safe use and disposal of pesticides," says J S Thakur, Department of Community Medicine, pgimer. Monitoring drinking water for pesticides and heavy metal by the health department, setting up a cancer registry at local levels and monitoring bodies under the Food and Drug Administration to check mercury and arsenic contamination were other suggestions. "It has been two years but none of our suggestions has been put into action," says Thakur.


When dte approached Sukhdev Singh, director of the state health services, he refused to speak on the pretext that he could not understand any language other than Punjabi. Questions were, however, fielded by Navneet Kanwar, project officer, National Cancer Control Programme. He was quick to point out that "we held a lot of health camps". But that was two years ago. Contrary to government claims that health workers were appointed in Malwa, local people have not seen them. Jasvinder Singh of Malkana said there was a camp once but no one was examined. "They just spoke and left. They did not even answer our queries," he said. "There was some talk of setting up equipment and appointing specialists at Talwandi Sabo block but nothing has happened. The former chief minister, Amarinder Singh, had announced financial aid to cancer patients but none of it has reached them."

A visit to Jajjal confirmed this. Its dispensary was locked. Locals said it opened once a week, but only for a couple of hours. "We haven't seen a doctor in the village and there are no medicines apart from analgesics," says Shanti Devi, a villager. The programme officer said the Cancer Control Programme was centrally funded and they had received no funds for any other health programme. Passing the buck to pgimer, she added: "We are trying to make it the nodal agency for the Regional Cancer Centre. In fact, the centre has given Rs 22 lakh to pgimer this year and it is likely to begin health education in various districts."


Although the officer agreed that there should be regular health camps, she added it was the responsibility of the agriculture department to train farmers on the use of pesticides. The Integrated Pest Management (ipm) division of the department claimed several programmes were being held to train farmers. But people deny receiving training. "Some people from pesticide companies do visit us but just to ensure sale of pesticides," said Jagmail Singh of Channu village in Muktsar.

An agriculture development officer, Ranjodh Singh Bains, said since 2005 ipm had covered 280 villages in the state. "The target in 2008 will be to cover 1,000 villages. All this was done under the ipm project sponsored by the Sir Ratan Tata Trust, Mumbai," Bains informed (See box: ipm for whom?).

Farmers, however, still handle pesticides carelessly. Senior scholar G S Dhaliwal and his colleagues at Punjab Agricultural University (pau) had conducted a study in Jalandhar and Moga in 2005 to find out how aware farmers were about the implications of excessive use of pesticides. They found that 28 per cent of the respondents were unaware of the instructions written on the pesticide containers and over 50 per cent did not follow them. DTE came across instances where the farmer emptied a pesticide pack and threw it into the canal supplying water to the villages. The majority of the farmers did not dispose of empty containers, some stored food grain in them.

And it is not just pesticides. Even the groundwater in Malwa is contaminated with arsenic and mercury. The Department of Entomology and Soil Sciences, pau, which studied the status of pesticide residues in water, soil and crop samples in Jajjal and two other villages of Bathinda, however, ruled out that the contamination could be due to pesticides.

N S Tiwana, executive director, Punjab State Council for Science and Technology, says the Department of Water Supply and Sanitation formed a task force in August to study the impact of arsenic. But promises mean little to the people suffering a toxic environment.