In population of endangered camel species 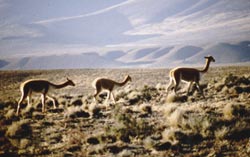 the vicuna, a delicate high-altitude cousin of the llama which inhabits the Peruvian hills of the Andes, is on the comeback trail. Its numbers have now reached 149,000 -- up from only 25,000 about 40 years ago. The figures were divulged recently by the Peru government-run National Council on South American Camelids (conacs). This animal, prized for its wool, was put on the list of the Convention on International Trade in Endangered Species (cites) in 1975.

The vicuna (Vicugna vicugna) cannot reproduce in captivity. It lives in areas unsuitable for conventional agriculture or livestock practices. Thus, the only way to ensure its survival is to protect its natural environs. The Peruvian indigenous communities had been handed over the management of the species in 1987. Today, apart from its presence in Peru, another 15,000 can be found in Bolivia.

Rony Garibay, a conacs expert, reveals that the annual growth in the vicuna's population is more than 8 per cent now. conacs believes current conservation practices could raise the animal's numbers to 300,000 within a few years. Vicuna specialist Antonio Brack Egg predicts that there could be a million of these animals in Peru by 2021. "It is not an excessive figure, because it is estimated that in the times of the Inca, there were around 2 million vicuna," he says.

In 1965, the international community was alarmed by estimates that there were only 25,000 surviving members of this species. The animal was pushed to the brink of extinction by poachers -- at us $437-650 per kg, the vicuna's wool (10.8 to 11.4 microns thick) is one of the most expensive fibres globally.