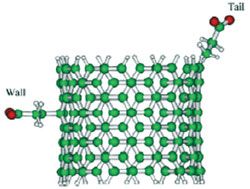 THE recent accident at the Fukushima nuclear plant in Japan has left governments across the world worried over the safety of nuclear energy and its waste. As radioactive materials contaminated water, soil and air, technology to clean up the waste came to the forefront.

The process is the first step towards removal of toxic waste from the power plants. But the materials are in short supply. Since they have a complex structure and the interaction between these substances and uranyl are not well understood.

Now researchers at the Bhabha Atomic Research Centre (BARC), Mumbai, have found an alternative to safely dispose of the waste. They say modified carbon nanotubes can be utilised for the purpose. Previous studies have shown that carbon nanotubes are efficient in the recovery and separation of radioactive elements. But these nanotubes have poor solubility in water and this restricts their use.

The researchers from BARC took carbon nanotubes and modified them by adding organic compounds like ethyl acetate. These organic groups give the nanotubes special shapes—armchair and zig zag—which help them bind better to radioactive materials.

The team studied the efficiency of these modified nanotubes to remove uranyl species with the help of computer simulations.

Due to functionalisation, the overall negative charge of the carbon nanotubes became larger and this helped bind to the positively charged uranyl complex more strongly as compared to the neutral form.

They found that binding of the uranyl species to the functionalised nanotubes depends on the pH of the solution. When pH is low, uranyl binds to nanotubes through physical adsorption—weak attachment to the surface without making any chemical bonds. It is at moderate pH, the modified nanotube binds effectively to positively charged uranyl species. “As the radioactive elements are toxic and highly soluble in water, one needs to find ways to convert them into non-toxic forms,” says Swapan K Ghosh, lead researcher. The team is working on how the modified carbon nanotubes can be used to remove other toxic heavy metal ions. “We are also trying various other modifications in the nanotubes,” he adds. The study was published in the June 23 issue of Journal of Physical Chemistry A.