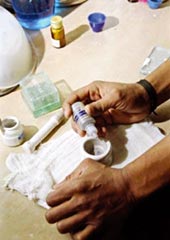 the use of mercury (Hg) in India's healthcare sector constitutes a major threat to public health. While merely 1 gramme (gm) of mercury is enough to contaminate a lake bigger than 8 hectares, an average hospital in Delhi releases about 3 kilogrammes (kg) of the metal annually, according to a recently released study. Regulations such as the Hazardous Waste (Management and Handling) Rules, 1989, notified by the Union ministry of environment and forests (moef), do not specifically cover mercury emissions by this sector.

The study, Lurking Menace: Mercury In The Health-Care Sector, conducted by New Delhi-based non-governmental organisation Toxics Link, reveals that dental practices in the capital alone lead to the discharge of as much as 51 kg mercury annually. "The findings of our six-month-long study are disturbing. For instance, thermometer breakage releases about 70 gm of mercury per month by one hospital," points out Anu Agarwal, programme coordinator, Toxics Link.

A major contributor to contamination is spillage from frequent instrument breakages. Healthcare staff are not trained to deal with it. The common practice is to either throw these devices in bins or incinerate them, releasing mercury into the environment. Leakages also occur during in-house calibration of sphygmomanometers. Besides, dental amalgams release about 10 microgrammes into a patient daily.

Are alternatives to mercury equipment too expensive? Ravi Agarwal, coordinator, Toxics Link, argues: "The cost-effectiveness of mercury equipment is a myth because it does not take into consideration indirect expenses like spill clean-up exercises, which could cost several thousand dollars." Significantly, M Subbarao, additional director, moef, has said his ministry will look at Toxics Link's report and might amend the 1989 rules.