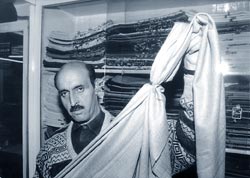 The Jammu and Kashmir (J&K) High Court (HC) has asked the state government to regulate the trade of shahtoosh shawl-making and shearing of Tibetan antelopes in such a way that the art and livelihood of artisans is protected. Earlier, the high court had passed an order directing the J&K government to enforce a ban on the sale and manufacture of shahtoosh shawls (see: 'Sharp reminder', September 30, 2002). Shahtoosh is obtained by shearing the endangered Tibetan antelope or chiru .

The previous ruling of the high court was in response to a plea made by New Delhi-based non-governmental organisation Wildlife Protection Society of India (WPSI). "The new order weakens the earlier one," says Belinda Wright, executive director, WPSI. "We are going to file an appeal in the Supreme Court as early as possible," adds Wright.

Tracing the history of the case, Wright explains: "Initially, we issued a legal notice to the Union ministry of environment and forests in 1995. This was followed by a public interest litigation petition (PIL), filed in the high court in 1998. Three years later, the court called on the state government to enforce the law and protect the chiru . We then petitioned the high court to enhance the ruling and completely ban shahtoosh trade because the state authorities had not taken any action. Meanwhile, the J&K government went ahead and prohibited shahtoosh trade on its own." Wright finds it "strange that the high court has come out with such an order since the ban is already in place". The Tibetan antelope now figures in schedule I of the Wildlife (Protection) Act of 1972, in Jammu and Kashmir. As per this, trade in any of its products is completely banned.

Artisans are expectedly opposed to this stringent measure. They contend that the animal is not killed for harnessing wool, and that shahtoosh is collected from high-altitude areas where the chiru sheds the wool. "The chiru is not killed in India. In any case, this was never the premise on which the PIL was based," says Ashok Kumar of Wildlife Trust of India. He was with WPSI when the case was filed.

In its 68-page judgment, the hc observed that it was the plight of the artisans that had moved the court. "We are of the opinion that the interest shown by society should not end with the interest shown on the animals. There are other serious consequences which are likely to arise and have, in fact, arisen...". The ungulate is also listed in Appendix I of the Convention on International Trade in Endangered Species, to which India is a signatory.