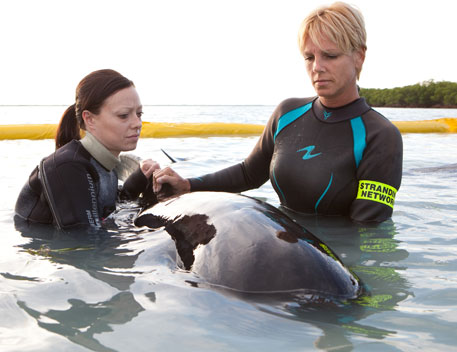 Dolphins and whales are dying in alarmingly large numbers in the northern Gulf of Mexico for the past one-and-a-half years or more. Between February 2010 and October this year, at least 586 cetaceans (dolphins and whales), mostly dead, have been found washed ashore. The death rate, this year, has been the highest in the past ten years.

The US government has declared the event as an unusual mortality event (UME). The National Oceanic and Atmospheric Administration (NOAA), under the US department of commerce, is investigating the event to determine the cause of  mortality and to minimise it. The recently released report of NOAA shows that 265 cetaceans were stranded in 2010; their number was 326 this year till October 30. In contrast, the average number of stranded cetaceans was 70 per year between 2002 to 2009.  All the stranding incidents have occurred at the Texas-Louisiana border through Franklin County in Florida. Ninety-five per cent of the stranded dolphins and whales were found dead. There could be more cases of cetacean deaths as not all cetaceans that have died will wash ashore and be found, says the report.

No definitive cause has yet been identified for the increase in cetacean stranding incidents. NOAA is considering factors like biotoxins and infectious diseases as possible reasons for the current unusual mortality event (UME). The direct or indirect effects of the BP oil spill in the Gulf of Mexico last year are also being investigated.  The NOAA report says that during the period between February 1, 2010 and April 29, 2010, prior to the response phase for the oil spill, 114 cetaceans were stranded. During the initial response phase to the oil spill in the period between April 30, 2010 and November 2, 2010, 122 stranded cetaceans were reported to have been found dead offshore. After the initial response phase ended, 350 cetaceans were stranded between November 3, 2010 and October 30, 2011 (see graph). 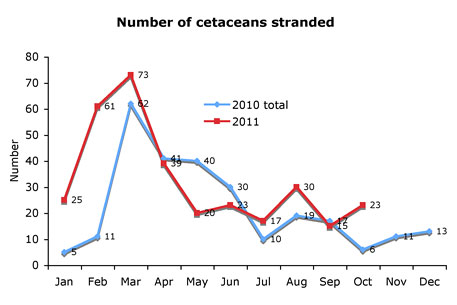 Under the Marine Mammal Protection Act 1972, UME is defined as "a stranding that is unexpected; involves a significant die-off of any marine mammal population; and demands immediate response.” A group of marine mammal health experts, determines that an event meets the criteria for UME or not and then an official UME is declared.

Since 1991, when the marine mammal UME program was started, there have been 53 formally recognized UMEs in the US, involving a variety of species. Fifteen UMEs have occurred in the Gulf of Mexico;11 of which involved cetaceans and the remaining four were specific to manatees (herbivorous sea mammals) only.