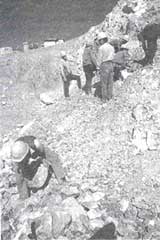 THE Congress (I) government rode to power opposing the Bharatiya Janata Party's (bjp) plan of setting up 16 mini and 3 big cement plants in Himachal Pradesh. Now the same government under Virbhadra Singh suddenly diverted from its declared policy by sanctioning 3 cement plants of 1 million metric tonnes (mmt) capacity each. This decision, based on an incomplete report has not only exposed the government's hollowed commitment to protect the state's fragile environment but has also sparked a political controversy.

The report, sponsored by the ministry of environment and forests (mef) and prepared by the Central Mining Research Institute (cmri) on the excessive and highly damaging limestone and slate mining in Sirmour district. 68 mines on a lease granted by the state government dig out an estinated 30,000 tonne limestone daily, causing irreversible damage to the entire eco-system.

For the Himachal government, the cmri report has become a convenient tool to justify its policy reversal. "The report finds no negative impact of limestone mining in Sirmour. Hence this experience can be replicated elsewhere too," says Chander Kumar, the state environment and ecology minister. Not everybody agrees with him. "This report is little relevant to these plants," says Ashok Sharma, member secretary, Himachal Pradesh Pollution Control Board (hppcb). The hppcb has not yet okayed its clearance to the government's proposal.

The report appeares to be tailored to suit cement lobby's interests. For, it finds the air ambient quality and the water quality in most places "satisfactory and well above norms." The cement plants would be set up at Karsog and Alsindi in Mandi distirct at and Barote Shind in Chamba district. "These locations were carefully chosen on the ecological, environmental and tourism considerations," claims Kumar.

Tall claim of providing direct and permanent employments to 4,000 people besides indirect employment to 3,000 others from these plants have been made. The highly mechanised Gujrat Ambuja plant in Darlaghat, Solan, could create direct employment for only 314 persons including 184 Himachalis. Many villagers displaced by this plant and by the cement factory at Barmana in Bilaspur district are yet to be rehabilitated. Little wonder, the Himachal government's volte face has generated strong protests.

Cement industry and limestone mining have always remained contentious issues for this state. Sections with vested interests wanted to exploit its huge limestone deposits and today 12 mini-plants and 3 big plants in Himachal have the total installed capacity of 3.5 mmt that's expected to go up to 6.5 mmt with new plants coming up. The state government continues to cause damage to the environment and distress to the people.