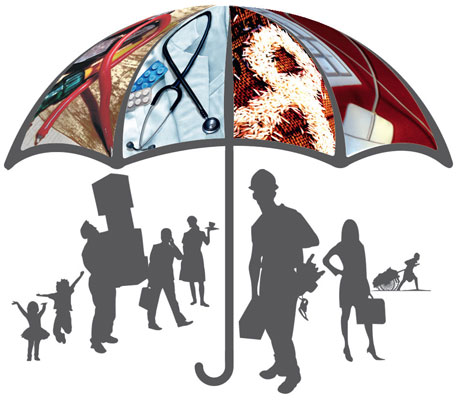 Access to and effects of social protection on workers living with HIV and their households draws its conclusions from research conducted in Guatemala, Indonesia, Rwanda and Ukraine. The four countries are in the UNAIDS list of high HIV impact countries and are currently developing their social security systems.

The report suggests that social protection programmes can reduce the structural barriers that make people vulnerable to HIV. In the studied countries, between 63 per cent and 95 per cent of HIV partients with access to social protection were able to keep their jobs or some form of productive activity. At the same time, 49 per cent to 99 per cent said that their children remained in school and 72 per cent to 86 per cent were able to access life-saving antiretroviral treatment.

The report, however, notes that the social protection systems are much more readily accessed by those working in public and formal sectors. “People living with HIV are often in the informal economy and therefore much more likely to miss out,” says the report.

ILO found that while the four countries had social protection programmes, access to them was unequal, particularly for HIV patients. The reasons for unequal access were lack of information along with complicated procedures to access social protection. “In Rwanda more than half of the respondents (59 per cent) indicated that they were eligible for social protection benefits, but that the application process was too complicated, while 47 per cent simply said that they did not know how to apply,” says the report.

It also says discrimination, and self-stigma in the form of poor self-image often stops HIV patients from seeking social protection. They are discriminated because “they belong to HIV vulnerable groups, e.g. sex workers, men who have sex with men, or injecting drug users; they are poor and disadvantaged, or are unemployed”.

It says that while AIDS medicines are supposed to be available for free, but in reality this is not the case. The out-of-pocket expenses, including transport costs to get to health centres, make the process prohibitive.

Between 42 per cent and 67 per cent of the respondents across the four countries had lived with HIV for five to nine years, which demonstrates that majority of the HIV populations had access to social health protection. However, only 20 per cent of respondents in Guatemala, 11 per cent in Indonesia, 25 per cent in Rwanda and 19 per cent in Ukraine have lived with HIV for more than nine years. “Access to anti-retroviral treatment keeps people living with HIV alive. But too often, the lack of broader social protection benefits keeps women and men, and their households, vulnerable and poor,” says Alice Ouedraogo, chief, ILOAIDS, which produced the study.

The report says that a combination of income, livelihood and employment support is needed, besides health services, to have a bigger impact on HIV populations. This can be achieved through a coordinated effort between the government, private companies and civil societies.