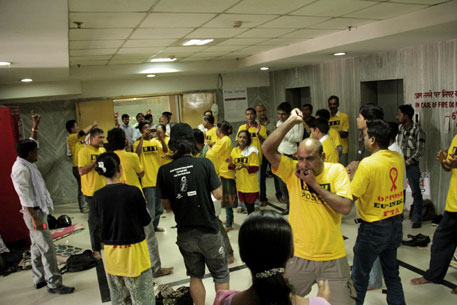 Activists working with AIDS/HIV patients have been on sit-in protest in front of National AIDS Control Organisation’s (NACO) office in central Delhi for the past three days. They are angry over the break down of CD4 laboratory services across the country. AIDS treatment programme depends on CD4 tests for initiating anti-retroviral treatment.

They called off their protests on Thursday after the director general of NACO assured them that the services will be resumed across the country from 12 noon Friday. The protesters said they will resume dharna if the promise is not kept.

NACO guidelines recommend that people with HIV should start anti-retroviral treatment (ART) when their CD4 counts fall below 350 CD4 cells/mm. The test is repeated at regular intervals.

However, several centres where CD4 testing is done free of cost are now without kits or reagents. Delhi Network of Positive People (DNP+) and the Indian Drug Users' Forum (IDUF) have been writing to NACO to highlight the shortage, said Loot Gangte from DNP+.

Procurement of HIV medicines and medical tools such as CD4 and viral load kits or reagents is undertaken at the Central level through a procurement agent M/s RITES Ltd that has been contracted by Union Ministry of Health and Family Welfare to undertake procurement under various programme divisions of the health ministry, including NACO and Revised National Tuberculosis Control Programme (RNTCP).

But the contract of M/s RITES Ltd was not renewed by the ministry for almost two years, which has resulted in serious delays in the procurement of TB medicines and now CD4 kits and reagents for the HIV programme, he informed.

"Last month, civil society and TB activists publicly protested in front of the health ministry office against the stock out of TB medicines. Now we are protesting the stock out of CD4 kits in the HIV treatment centres. It is shocking that doctors will not be able to initiate or monitor treatment of people living with HIV. This is unacceptable," said Gangte.

DNP+ said the Centre needs to urgently address the stock out of CD4 kits or reagents in ART treatment centres in the Northeast, Uttar Pradesh, Maharashtra, Delhi and other parts of the country.