Homing in on tradition

Traditional models of architecture, especially for mass housing purposes, may yet be resurrected 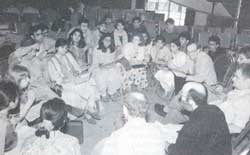 OLD is gold... and "green", and nowhere is it more true than in the case of sustainable models of low-energy, climatically responsive architectural designs. This realisation brought together architects and designers in a recently concluded workshop at Delhi's School of Planning and Architecture (SPA). Some 20 eminent architects from Israel, the UK, Australia and the USA discussed the possibilities and merits of applying traditional Indian architectural designs with Indian architects and spa students.

The declaration adopted by the workshop said that learning from the vast and rich repository of the earlier generation's experience regarding the application of traditional building models can be a very powerful tool for improving the buildings of the future.

But the architects themselves had abdicated their responsibility of designing passive, low-energy buildings, said S V Szokolay from Australia, president of the Passive Low Energy Architecture International (a network of architects and building scientists). He said, "Architects have not spent enough time on climatic issues. In the 20th century there has been much progress on the active control of the environment, like lighting, fans and airconditioners, and the architects abdicated their responsibility in favour of these new technologies."

Says Arvind Kishan, organiser of the workshop, and head of the Centre for Advanced Studies in Architecture, spa, "It is clearly a lack of commitment and will on the part of the government and bureaucratic establishments. The architects also do not want to face the responsibility, nor accept the fact that they have to work more."

But the central problem in the construction sector seems still to be that of mass housing. As the Israeli architect Yair Etzion pointed out, "A steep increase in the mass housing projects in India is expected to come up in the next 10 to 20 years, and only a sensitivity to the low- energy, climatically responsive features would provide viable answers." But many felt that the problem merited more brainstorming.

The problem of mass housing has also to be perceived differently. As Suhasini Ayer Guigan, architect at the Auroville Building Centre says, "Mass housing is a self-defeating concept. Now, the government and public sector agencies take up mass housing. Instead, people should be imparted the necessary skills and material resources to take the job in their own hands."