US industry shows distrust in India, sets its own certificate to ensure source of honey 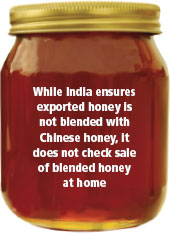 AT A time when Indian honey is under the scanner for allegedly re-exporting cheap and poor quality Chinese honey, a private firm has become the first in the world to bag the True Source Honey (TSH) certificate. The certificate, a US industry initiative, is the authentication of the origin of honey the US imports.

The news has brought some relief to the Indian honey industry, reeling under an import ban by the EU and facing distrust of the US market. It also highlights the country’s lax regulatory system. After all, India has a designated body, the Export Inspection Council, to inspect the quality of exported goods and certify them.

The initiative was launched last year after the US authorities raised alarm over countries circumventing its restrictions on Chinese honey. Washington had imposed heavy anti-dumping duty on Chinese honey in 2001 after it found the Chinese were dumping antibiotics- and heavy metal-laced honey in the US at an undercut rate. A company is eligible for TSH certificate only if it has not imported honey from China in three years. The certificate will be issued after a third party audit and will be valid for two years. Prakash Kejriwal, director of Kejriwal Bee Care (pvt) Ltd, which won the certificate, says it is a proof that not all honey suppliers in India are re-exporting Chinese honey. This will insure India’s reputation in the global market.

Indian honey exporters fell from grace in September last year when the US Department of Justice charge-sheeted an international racket of 15 individuals and six companies, including an Indian company, for illegal re-export (see ‘What’s in your honey’, Down To Earth, September 30, 2010). 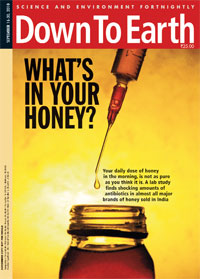 Some Indian exporters call this indictment an anti-Indian honey propaganda, while industry insiders as well as some officials in the regulatory bodies confide India’s role in honey laundering.

Trying to avoid another ban, a cautious Directorate General of Foreign Trade in February this year issued a notification that says honey exported to the EU and the US shall be wholly obtained from India and that no blending will be permitted with foreign honey. But it seems the notification has little effect on honey exporters as there is no let up in allegations.

The latest one comes from Pulitzer Prize winning journalist Andrew Schneider, in an article published in Food Safety News on August 16. “Little Bee honey, a subsidiary of Kashmir Apiaries, had imported 16 consignments of more than 688,000 pounds of honey from China between July and August, this year. International shipping documents further show that within the first week of August, six shipments of Little Bee Honey were exported to US and they had the same identification numbers of the honey shipped from China,” the report read. Little Bee denies the allegations.

Asked about the certificate, an official with the Export Inspection Council (EIC) said a third party audit to determine traceability was welcome. Such eagerness to rely on a foreign traceability system only exposes a chink in EIC’s armour.

Consider this. Soon after the EU banned Indian honey in June 2010 due to the lack of traceability and presence of antibodies and heavy metals, EIC along with the National Bee Board decided to establish the traceability system. But it took the officials more than eight months to actually start working on the system. Of the 100,000 beekeepers only 2,000 have been registered so far.

Besides, while the government is ensuring that not a drop of Chinese honey is blended with honey meant for export, there is no restriction on its import for consumption at home. The technical committee of the Bureau of Indian Standards has met just once since the government directed it to set standards for antibiotics in honey in December last year. The Food Safety and Standards Authority of India, the apex food regulatory body, is still in the process of framing standards.

So as of now, Indian consumers will have to look out for themselves.