US appeals court rules in favour of Bhopal gas victims 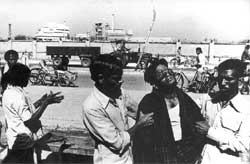 for 17 years they have fought two grim battles -- one in court and the other for life. Finally, the protracted struggle of the five lakh people devastated by the lethal gas leak in Bhopal in December 1984 appears to be bearing fruit. At least on the legal front.

On November 16, 2001, the us second court of appeals in New York (ny) ruled that Union Carbide -- the American chemical conglomerate that was responsible for the worst industrial disaster in the world -- and its then chief executive, Warren Anderson, are answerable for criminal charges in India. Significantly, the court has also fixed responsibility for long-term medical, social and environmental liabilities arising out of the incident. This is the first time that the ecological damage caused by the disaster has been brought under judicial scrutiny.

Ironically, non-governmental organisations (ngos), and not Indian authorities, took up the victims' cause. A report entitled 'The Bhopal Legacy', brought out by international ngo Greenpeace, forms the basis of the suit. It scientifically confirms that massive environmental contamination has taken place at the Union Carbide India Limited (ucil) site where large amounts of toxic material are still present. Meanwhile, the research conducted by the government continues to be kept under wraps (see box: Stifling secret ).

The case was filed against Union Carbide and Anderson in November 1999 by a group of seven individual victims and five activist organisations. The plea had, however, been rejected by the southern district court in ny in August 2000. In November 2001, a judgement was passed on appeal in favour of the aggrieved party. The suit was filed in the us because there is no legal provision in India under which compensation can be claimed for environmental damage, says Abdul Jabbar, convener of Bhopal Gas Peedit Mahila Udyog Sangathan, a self-help organisation created by the victims.

Culpability has been established on the part of Union Carbide for all the fallouts from the methyl isocyanate (mic) leakage. But, in effect, Michigan-based Dow Chemicals Company will be liable to pay up because Union Carbide is its wholly owned subsidiary now. "Given that the parent company has substantial assets in India, the goal of securing justice now seems more real," says Satinath Sawangi, Bhopal Group for Information and Action, a support body for the victims.

The us court has suggested that India could use the extradition treaty to bring Union Carbide and Anderson to appear before the Bhopal district court. The Union government is yet to react to the development. Anderson has been evading Indian courts since 1984.

The ny court's order, a result of the victims and their supporters' steadfastness, is half the battle. The least the government can do is expeditiously take the case to its logical conclusion.