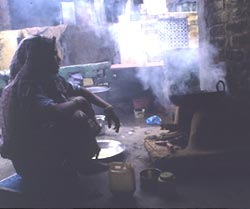 Smoke from indoor cooking fires kills one person every 20 seconds in the developing world. This is the finding of a survey conducted recently by the Intermediate Technology Development Group (itdg), a uk-based campaign organisation. The survey shows that indoor air pollution is the fourth largest cause of deaths and diseases in the world's poorest countries, killing 1.6 million people annually. Nearly a million of them are children. The figure is much more than the number of people killed by malaria, and same as deaths due to unsafe water and lack of sanitation.

In poor people's homes across the developing nations, levels of exposure to pollutants are often 100 times more than the recommended levels. Women who cook with the help of biomass are four times more likely to suffer from chronic obstructive pulmonary disease, such as chronic bronchitis. Lung cancer in women in China has been directly linked to the use of coal-powered stoves. In addition, there is evidence linking the pollution with asthma, tuberculosis and low birth weight.

The answer to the problem is the use of cleaner fuels, but most people at risk are too poor to afford them. itdg experts say risks can be minimised by other means, such as using well-designed chimney stoves or smoke hoods, which are able to reduce the pollution by up to 80 per cent.