How harmful is PoP to the environment?

Artisan groups say PoP is made from naturally occurring substance and does not the affect the environment; activists say its impact is long-term 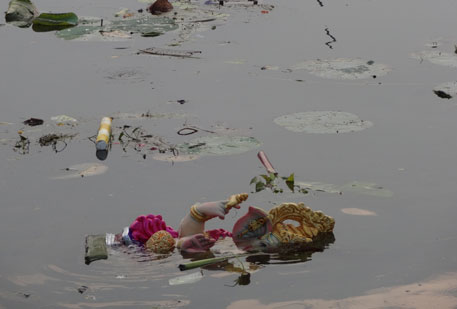 There have been efforts to ban sale of plaster of Paris (PoP) idols for Ganesh Chaturthi festival in the past, but these have proved futile. The biggest hurdle in implementing such a ban is the fact that there is no definitive and comprehensive scientific study on the impact of PoP on the environment. Studies on the impact of idol immersions carried out in places like Bhopal, Jabalpur and Bengaluru show several significant impacts like steep rise in concentration of heavy metals, dissolved solids, and acid content, and a drop in dissolved oxygen.

Since these studies mostly centre around testing of water quality before and after immersions, the results reflect the cumulative effect of PoP, clay, chemical colours and other materials; there is no way to ascertain the exact role of PoP in water pollution as well as its larger impact on the environment.

Basic chemistry says that PoP is made by heating gypsum at temperatures in the range of 300°F. When it comes in contact with water, the material regains the form of gypsum. Since gypsum is a naturally occurring substance, and is used as a soil-conditioner to reclaim saline-sodic soils, it has been argued by idol-makers’ associations that it is harmless to the environment. In Gujarat and Maharashtra, artisan groups have used this argument to challenge attempts to ban PoP idols in court.

In fact, Gujarat government’s attempt to ban PoP idols in 2012 was turned down by the National Green Tribunal (NGT) in a May 9 order this year, partly on the grounds that there is no evidence that PoP is harmful to the environment. A 2012 study by Pune-based Srushti Eco-Research Institute, which says that no pollution was caused to the Mula-Mutha rivers in Pune from immersion, was treated as evidence in this regard.

Non-biodegradable nuisance
This argument, however, is trashed by activists who argue that PoP idols are non-biodegradable. A test carried out by  Shyam Asolekar, professor at the Centre for Environmental Science and Engineering at IIT-Mumbai, showed that these idols remain intact for several months in still water, as compared to clay idols which dissolve within 45 minutes.

“The immediate and most observable impact of PoP idol immersion is that it makes the water cloudy,” says Avantika Chitnavis of Nagpur-based non-profit Nagpur Heritage Society. “Unlike clay, PoP idols take months to dissolve and the water remains that way for a long time after the festival is over.”

“Gypsum being natural material does not discount the fact that adding large quantities of it to water will raise its hardness and reduce its life-carrying capacity,” says Lolita Gupta of Eco-exist, Pune (her firm makes and sells clay idols of Ganesha). “It has been a common observation that a large number of fish deaths occur in water-bodies after immersions,” she says.

Apart from causing chemical pollution, the idols can be a nuisance in other ways, says Deepak Girme of Andha-Shraddha Nirmulan Samiti (ANS) Pune, a non-profit that has been campaigning against superstition and blind religious beliefs. “In Pune, most of the immersions take place at the confluence of the Mula and Mutha rivers, and it is common experience that the floating idols later get stuck in waterworks installations, intake wells and so on,” says Girme.

Disposal of PoP idols is an environmental nuisance, immersion or no immersion, says Avinash Patil, who heads ANS. “In Nashik and Sholapur, the municipalities and ANS jointly appealed to the people to donate idols to us rather than immersing them, which has been very successful. But now the municipalities are saddled with the responsibility of disposing an average of 200,000 idols each year.” Most of these idols, says he, are finding their way into landfills and unused quarries around the cities. “Unless we ban PoP, soon there will be no space left to dispose them of.”

Another point on which no attention has been paid, rue activists, is that PoP’s reaction with water is exothermic—it releases heat when in contact with water. There are no studies on what kind of impact the heat thus generated has on aquatic life in water bodies.

PoP-synthetic paint connection
In the absence of definitive evidence, the argument often hovers around chemical paints, the hazards of which are better documented.

“The only problem with these idols is the chemical paints used on them,” says Baliram Pawar, vice president of Ganesh Murtikar Sanghatana (association of idol makers) at Pen near Pune. The place is one of the largest idol-making hubs in the state, “We have already shifted to environment-friendly poster colours, so there should be no environmental problems,” he says.

Chitnavis, who has been organising workshop on eco-friendly idols in Nagpur every year for three years now, doubts the veracity of this claim. “In my work with eco-friendly colours, I found that water-based colours like food colours and natural dyes do not sit well on PoP idols because water reacts with PoP. The only paints that work on PoP are oil paints which are high in poisonous chemicals and heavy metals.”

Also, poster colours also have chemical and heavy-metal content and are only fractionally less hazardous than oil paints.

A study conducted by the Central Pollution Control Board (CPCB) in Bengaluru revealed that post immersion, acid content and dissolved solid content in the water rose significantly. Presence of heavy metals like iron increased 10 times, while the presence of copper in sediments increased by 200 to 300 times.

It its order of May 9, this year NGT has ordered state pollution control boards to constitute expert committees to study the impact of PoP on water bodies. The committees were supposed to submit their reports within three months of the order. However, the Maharashtra Pollution Control Board issued its order constituting the committee only on July 15,, 2013, more than two months after the NGT order. The report of the committee, which was to be submitted before the start of festival, is still awaited.

Going by the attitude of pollution control boards, such information is unlikely to be made available in the near future.