EVER wondered why it’s windy and thunderous when you need to go to office and quiet on weekends? Well, blame yourself.

Scientists have found that human activity that releases aerosols is the culprit behind an increase in tornadoes and hailstorms during summer weekdays.

The research team analysed summertime storm activity in the eastern US from 1995 to 2009 using data from the National Oceanic and Atmospheric Administration’s (NOAA) Storm Prediction Center. The data revealed tornadoes and hailstorms occurred at a rate of 20 per cent above average during the week, and 20 per cent below on the weekend.

The researchers then looked at data obtained from US Environmental Protection Agency (EPA) on summertime air pollution in the eastern US for the past 15 years (1995-2009) and found that it peaks midweek. This led the researchers to make the link to the pollution created during the working days. 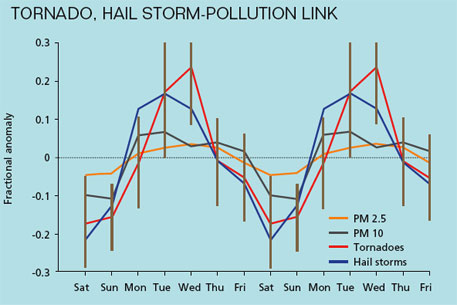 But how does pollution lead to tornadoes and severe weather? Researchers say moisture gathers around specks of pollutants; this in turn leads to more cloud droplets as the pollution increases. Computer models indicate as these heavy droplets get picked up higher into the air they can cause more hail. The larger and heavier hail-producing droplets created by pollutants have less surface area than an equal mass of smaller particles of normally condensed water droplets or ice. The pollutant based droplets evaporates more slowly and are not as likely to pull heat from the air. This makes it easier for the warm air to help form super droplets that spawn tornadoes. The study was published in the December 2011 issue of Journal of Geophysical Research.

“Our study opens the field for serious consideration of aerosols affecting the intensity of severe convective storms, and taking it into account in their prediction”, says Daniel Rosenfeld from Institute of Earth Sciences, Jerusalem, Israel lead author of the study. The study was done in the US because it is the only country that maintains data base of severe storms, he adds.

Earlier studies have also linked pollutants to extreme weather events. A study published in Atmospheric Chemistry and Physics in 2006 supported the possibility that in a moist, unstable atmosphere such as those prevailing during the summer in southeast US, pollution aerosols can induce clouds to develop stronger updrafts and downdrafts to trigger secondary storm development and produce more rain. Another study carried out at the University of Virginia and published in November 2011 issue of Nature, found that Arabian Sea tropical cyclones are intensified by emission of black carbon and other aerosols. The study also took a closer look at the Indian scenario, where they documented a recent increase in the intensity of tropical cyclones over the northern Indian Ocean. They noted that anthropogenic emission of aerosols has increased six-fold since the 1930s, creating an environment more favourable to storm intensification.