How vulnerable are India's nuclear power plants to disaster 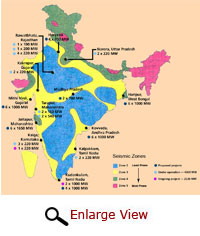 In India, every region falls in seismic zone in some way, said Durgesh Rai of IIT Kanpur. “Most of our nuclear plants are in weak seismic zones but lie in coastal areas. Their structure is earthquake-resistant but they have not been tested against tsunami. The entire coastal region is believed to be vulnerable to tsunami,” he said. Nuclear plants are built near the sea because sea water is required to cool the reactor.

What happened during Fukushima incident in Japan

The power plant survived the earthquake and was shut down. Limits are set on the levels of velocity, acceleration and displacement in every power plant. The plant stopped functioning when the limits exceeded. Atomic reaction thus stopped. When the plant stopped functioning, sea water used to cool the reactor stopped flowing. The diesel generators that were to feed water to the power plant also apparently shut down. Thus, the cores began to heat up.

Though the fission of radioactive elements was stopped, some reactions continued generating a great deal of heat. Without cooling, the temperature rose, boiling off the remaining water and increasing pressure leading to explosion.

The plant that survived earthquake earlier in Japan

In 1995, the Kobe-Osaka earthquake did not affect the nuclear power plant just 110 km from Kobe. After the 7.2 magnitude earthquake, a panel was set up to review the safety of nuclear facilities in Japan and design guidelines for their construction. The Japanese Nuclear Safety Commission (NSC) approved the panel's report. After recalculating the seismic design criteria required for a nuclear power plant to survive near the epicentre of an earthquake of high intensity, the NSC concluded that under current guidelines the plant could survive a 7.75 magnitude quake.