Bad weather spells in Bay of Bengal between February to October, the busiest period for fishers, have affected their livelihood 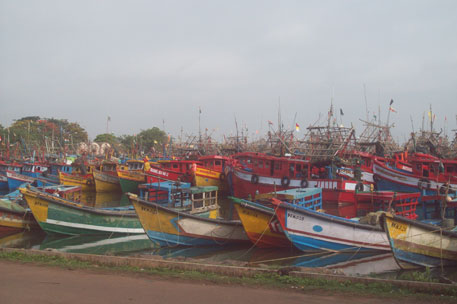 The fate of around 300,000 marine fishers in coastal districts of Odisha hangs in balance as bad weather continues to disrupt their means of earning livelihood. Earlier in June this year, the low pressure that was created in the Bay of Bengal had forced many fishers to anchor their boats for more than 40 days during the peak fishing season. Now, with impending cyclonic storm Hudhud, all set to hit Odisha-Andhra coast on Sunday, October 12, they are agin forced to stay on land.

Incessant rain and gusty winds have already started blowing in the coastal areas of the state. Along the entire coast of both the states, estimates suggest that around 16,000 fishing boats and 1,800 trawlers are affected. The imminent Huhud has also forced many fishers to return to the shore.

Sumanta Biswal, president of trawler owners’ association of Paradip, says, “Fishers are already suffering due to increase in price of diesel, ice and fishing nets. Hudhud will add to their woes as now they simply cannot go out to fish."

One June 1, a large numbers of marine fishers had ventured into the sea for fishing after the 45-day long ban, imposed every year from April 15 to May 31, was lifted. The ban is imposed to allow fish to spawn through natural breeding. But incessant rain and winds that followed the ban hampered fishing for another 40 days. “We have already lost 40 fishing days. Around 300,000 marine fishers have been affected due to recent bad weather spells,” says P K Dev Burman, a fishers’ leader in Paradip.

Ramesh Mandal, a fisher in Kharinashi says, “We have no income and are facing serious financial difficulties due to low pressure in the sea. The weather has forced thousands of fishers to stop fishing, evening ruining lives of some of them.” He adds, “On Thursday, I left the fishing village Sandakuda in Paradip for a safer place at Marsaghai around 30 kilometres from Paradip”. Like Ramesh, many more fishers have already left seaside fishing villages in Paradip, Pentha, Gopalpur, Puri, Dhamara, Balaramgadi and other vulnerable villages in Odisha.

Niranjan Mandal (60), a fisher from Jamboo village in Kendrapada district, says, “I have been fishing for more than 40 years and we have faced bad weather conditions many times. But we never faced continuous bad weather before this.” He further explains that is not just the fishers who will be affected but that the whole industry will see an impact. The skyrocketing prices of potato, kerosene, candles, flattened rice and other commodities are another cause of worry.

Traditionally, the east wind season (associated with the dry season), which lasts from February to October, is the busiest period for fishers. However, this year's west wind has caused severe waves due to low pressure in the Bay of Bengal and has been worse in the rainy season. “Now, Hudhud will ruin us," says Tushar Sardar, the president of the district unit of the Odisha Traditional Fish Workers’ Union (OTFWU).

Pratap Chandra Rout, deputy director fishery (marine) of Odisha, says that the government has 16,848 registered fishing vessels, including 1,755 trawlers of the state. The fishery department has provided 900 distress alert transmitters (DATs) to the marine fishermen of the state for their safety. When the transmitter button is pressed, it sends distress signals to the maritime rescue coordination centre in Chennai. The signals help identify the direction and position of the boat. The fishery department has also warned all the fishermen not to venture into the sea for fishing as Hudhud is approaching the coast.